Alexandria is a popular day trip for tourists visiting Egypt. Learn about the most spectacular places to go in this Mediterranean city. 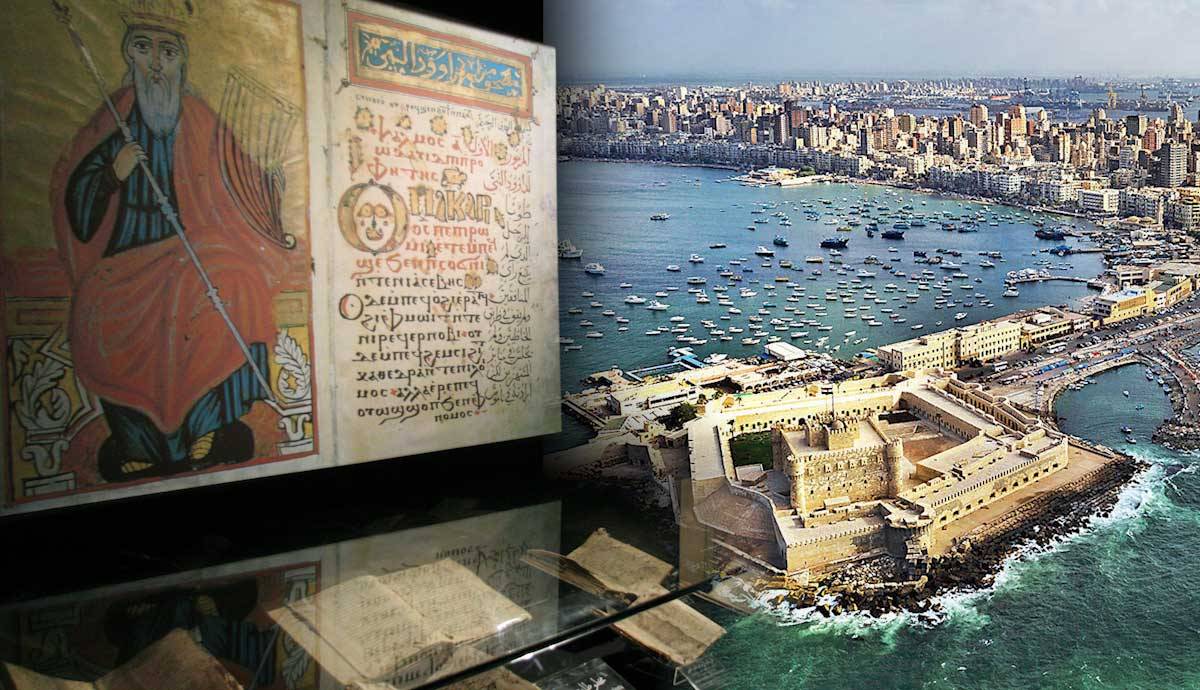 Alexandria is Egypt’s second largest city and is located on the Mediterranean at the northernmost tip of the country. Traditionally, it is believed that Alexander the Great established it around 331 BCE, giving it his name. However, its location already would have made a good port, and when he first visited the it, it was a fishermen’s village called Rhakotis. Recent archaeological work indicates that there may have been a large settlements on the site during Dynasty IV and in the post-Ramesside period as well.

The city is often visited as a day trip from Cairo by tourists as part of a tour of the country. It can be a welcome respite from the stifling heat of the south, but that’s not the only reason to visit. While Alexandria is most famous for its Roman period remains, they are by no means the only amazing sites you can visit. In this article, I will share seven of the most spectacular historical sites you can visit in Alexandria, shedding light on its architectural history and the varied artistic traditions that have made their mark on this cosmopolitan metropolis.

Of all of Egypt’s royals, Tutankhamun is the most famous for the gold bling his tomb contained. But the Ottoman royal family also had a penchant for sparkly things and could really give the boy king’s “wonderful things” a run for their money. After the 1952 revolution in Egypt, the royal family relocated to Europe, and their properties were seized by the new government.

Their jewelry collections and other bling are now displayed in what was once a royal palace belonging to Princess Fatima al-Zahraa. Some of the items are on display are really over the top, such as a sistrum rattle that King Farouk used as a baby to call for his nanny and other servants. It was decorated with diamonds, emeralds, rubies, and gold. Clearly, he was born with a bit more than a silver spoon in his mouth!

The building that houses the museum is also spectacular. Stained glass representing famous stories from European literature make-up the windows, including scenes from Romeo and Juliet.

One of the most popular tour stops in Alexandria is Kom al-Dikka, the site of the so-called Roman Amphitheater, located near the main train station for visitors from Cairo. The name implies that the monument was a place for entertainment, and it is possible that it could have been used as such, with space for an audience of 700-800 people.

However, the amphitheater could also have doubled as a classroom. As further discoveries of adjacent classrooms suggest it may have been a large lecture hall for Alexandria’s ancient university. Moreover, if you stand in a spot in the center at the bottom of the “U,” you will find that your voice is naturally amplified, perfect for a single lecturer to reach the entire crowd seated around him or her.

The site also has the remains of a private home known as the Villa of the Birds, due to its beautiful mosaic floor featuring birds. A bathhouse was also found on the site.

The name of this site means “Mound of Sherds”. It probably was an apt description of the area when a donkey’s leg got stuck in a hole on the site in the early 20th century, uncovering a deep set of catacombs. The catacombs served as the final resting place for a single family. But over time they were expanded to take in the corpses of many of Alexandria’s elite.

Built on multiple levels underground, one of the highlights of the complex is the triclinium, or funerary banquet hall, where relatives of the deceased held a funerary banquet while reclining on couches, Roman-style.

But even more striking is the tomb structure in the lower part of the catacombs, which takes the form of an Egyptian temple entrance, flanked by two agathodaemons, or snake gods. However, the style and certain architectural elements are strikingly non-Egyptian, and draw upon Greek and Roman themes and artistic conventions. As you wander around, you will see a lot of art that is an amalgamation of these three artistic and cultural traditions, unique to this site.

This fort stands on a promontory at the edge of Alexandria that juts out into the sea. Constructed by Sultan Qait Bey around 1480 CE as part of his defense of the Mediterranean coast, it continued in this role until the British attacked in 1882, starting to fall into ruin. It was eventually restored as a tourist attraction and it is particularly popular with Egyptians.

But for many, the big attraction of the fort is not the current structure, but the fact that it occupies the exact location where the Lighthouse of Alexandria (Pharos) was located, considered one of the seven wonders of the ancient world. The lighthouse stood until the beginning of the 14th century, when an earthquake destroyed it. A few parts of the original structure were reused in the construction of the fort.

With its reputation as a center for ancient learning and science, it’s no wonder that Alexandria has long been the home of engineering and architectural wonders. On the surface, most of Alexandria’s historical architecture has seemingly disappeared with the development of the modern city. However, if you descend beneath the ground, you will find a virtual labyrinth of cisterns still remains, giving Paris’s famed sewers a serious run for their money.

Due to its location on the sea rather than the Nile, Alexandria since the Roman Period was reliant on underground cisterns to provide its water supply. A city of cisterns, it had over 4000 after the Arab Conquest; some public and some private, belonging to villas. The location of only one was known until recently, but more and more have been located in recent years due to work with old documents and archaeological investigation.

While there were cisterns in the Roman and earlier periods, the city became more reliant on them after a tsunami triggered by an earthquake in 365 CE led to the groundwater becoming brackish. This increased the city’s dependence on Nile flood waters brought from 30 km (18 miles) away by canal, and on rainwater. Thus over time, the cistern system evolved from small rock-dug pits in the Ptolemaic Period to magnificent structures on as many as four levels, with arches and columns taken from earlier buildings, holding up to 2500 square meters (2700 feet) of water for the public baths at Kom al-Dikka.

While the cisterns fell into disuse in the modern period, some served as air raid shelters during World War II, reinforced with concrete and with the addition of benches and a ventilation system for those seeking shelter.

Since it only officially opened shortly after the turn of the millennium, it’s a bit of a stretch to classify the modern resurrection of the ancient library of Alexandria (Bibliotheca Alexandrina) as a historical monument. But its distinctive architecture should make it as revered in the future as Alexandria’s other monuments.

It is also an important stop for art and history lovers as it houses a number of important museums. The History of Science Museum details Egypt’s contributions to the field from pharaonic, Hellenistic, and Islamic times. The Antiquities Museum preserves artifacts that were recovered during the building of the library itself and underwater finds from around Alexandria. The Sadat Museum documents the important role the late President Anwar Sadat played in Egypt’s modern history. Finally, the Manuscripts Museum documents the importance of the written word across Egypt’s long history.

The library also has exhibition spaces that are used for a variety of special displays on topics such as modern Egyptian artists and filmmakers, Arabic calligraphy, photography, historical scientific instruments, and folk arts. No matter what your interest in art is, it’s really a one-stop shop with a variety of opportunities to learn, just as its ancient counterpart was.

Alexandria has several more museums you can visit, such as the National Museum and the Greco-Roman Museum.

If you plan an overnight stay in Alexandria, you can bed down in the Cecil Hotel, a classic renovated palace that hosted Agatha Christie and was the headquarters of British Intelligence during World War II.

Opened in 1929 by the French-Jewish Metzger family, for a long time it was the place to stay and be seen in Alexandria. The hotel was nationalized in 1957 and it was only 50 years later that the Metzger family regained ownership after filing a lawsuit. They immediately sold the hotel and it is now under the management of the Steigenberger chain, which gave it a facelift. However, the hotel still boasts its original elevator, a favorite of many visitors, and even some of the cheapest rooms overlook the sea from the balconies.

The above are some of my favorite sites in Alexandria. But I also recommend stopping for lunch or dinner at one of the many seafood restaurants that dot the long Alexandrian coast where you can also admire the sea view!