HomeAncient HistoryA Brief History of Ancient Horses: The Steeds of Gods and Kings

A Brief History of Ancient Horses: The Steeds of Gods and Kings

Ancient horses played a pivotal role in shaping the Greco-Roman world. An essential asset for transport and warfare and a vital status symbol. 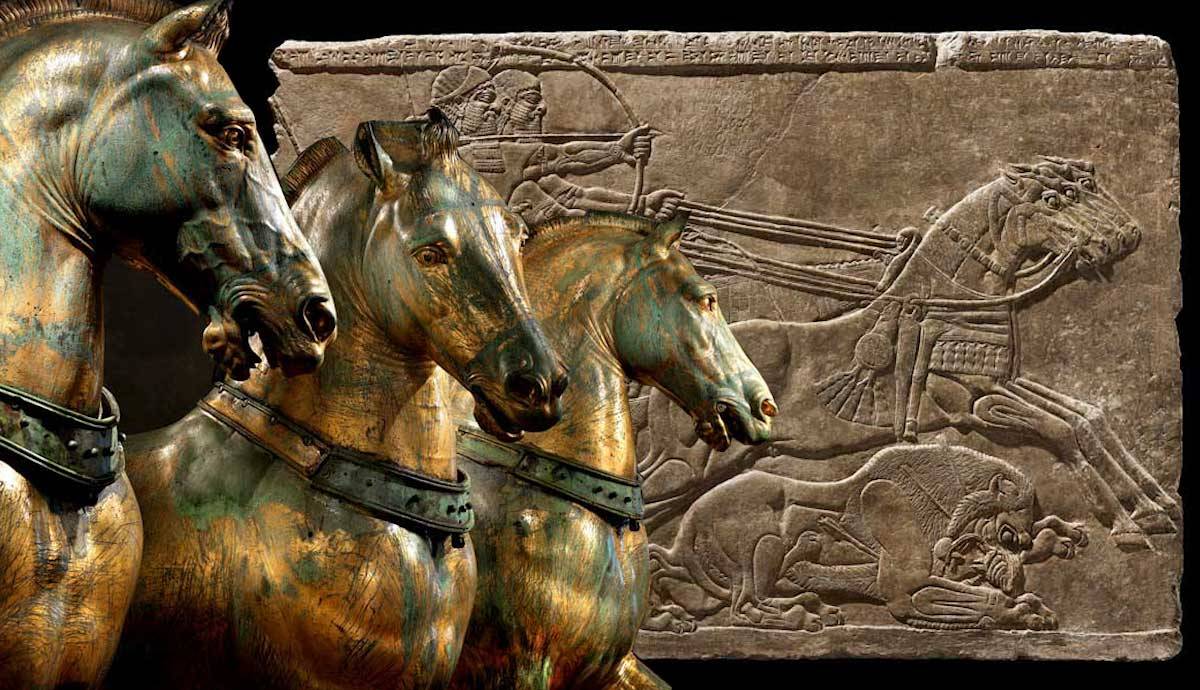 In his famous treatise On Horsemanship, noted Athenian general and historian Xenophon praised the ancient horse: “The majesty of men themselves is best discovered in the graceful handling of such animals.” Then he added: “A prancing horse is indeed a thing of beauty, a wonder, and a marvel, riveting the gaze of all who see him, young alike and greybeards.” In those few paragraphs, Xenophon, a pupil of the renowned philosopher Socrates, summarized the admiration ancient Greeks had for the horse, which became an essential part of their lives in war and peace.

The Romans, too, admired the animal, understanding its vital role in the ancient world. After all, since its domestication, the ancient horse helped farmers plow their fields, transported people far and fast, and carried soldiers into battle. Thus, it is unsurprising that the Equus caballus became a status symbol, a living embodiment of wealth and prestige.

The Ancient Horse: From Domestication to Status Symbol

Unlike cows, cats, or dogs, the ancient horse was domesticated relatively late, around 3500 BCE, probably on the steppes of southern Russia. Yet, its versatile role and ability to perform a range of tasks made the horse an integral element of all the early cultures of the Near East immediately after its introduction in 2300 BCE.

The human-horse partnership rested on many factors; perhaps most important was that the horse provided the quickest means of overland movement. In the centuries that followed, the horse facilitated the formation of the first empires, pulling chariots, carts, and wagons over vast distances, transmitting messages, and participating in battles. The Sumerians and Assyrians, skilled hunters and archers, kept detailed records of their horses, considering them their treasures.

By the early second millennium BCE, equines reached Egypt, where they became the favorites of the pharaohs, and entered the Mediterranean region. It would take several more centuries for the horse to gallop to Greece and Italy, the lands where the equid would achieve legendary status, becoming an indispensable companion and a symbol of high social status.

Wealthy owners took pride in their horses, and this, combined with the need for military horsepower, led to breeding regimes and advancements in horse care. In the fourth century BCE, in Xenophon’s Athens, the hippeis, or “horse-owners,” occupied the highest rung of the social and political ladder. Similarly, the owners of horses in the Roman Republic — the equites (knights) — belonged to high society and had special voting privileges.

The Horses of War: Companions of Kings and Generals

While the most famous rulers and commanders, like Alexander the Great or Julius Caesar, rode their horses on the battlefield, armies initially had no cavalry. Instead, the first warhorses pulled chariots — light, wheeled platforms, the equivelent of ancient tanks. From Assyria and Egypt to China and India, civilizations rose and fell under the chariot’s spiked wheels.

Following the disappearance of chariots at the turn of the second millennium BCE, horsemen arrived on the scene. Yet, it would take several hundred years for the cavalry to become an essential element of the ancient armies. The first significant role cavalry played in Greek warfare was during the conquests of Alexander the Great, while the Romans used cavalry only sparingly and in small numbers till the emergence of the Empire under Augustus.

To compensate for the lack of horse riders within their ranks, the Romans had to use the services of allied nations and barbarian mercenaries. For instance, the famed Numidian cavalry played a key role in defeating Rome’s rival, Carthage. However, after the disaster at Carrhae in 53 BCE, at the hands of mounted Parthian soldiers, Rome started to change its strategy by creating its own cavalry.

The first mail-clad horsemen appeared under Emperor Trajan, while specialized armored cavalry units — clibanarii — were inspired by Parthian and Sassanid models, and arrived on the battlefield during the third and early fourth centuries CE. Yet, cavalry remained a secondary force, with Rome focusing on its infantry — the legionaries. Only later, from the fifth and sixth centuries onwards, would cavalry would become a prominent force in the Eastern Roman imperial armies.

The late introduction of vital equipment may explain why the Romans waited so long to capitalize on horsepower. The stirrup arrived in the Roman Empire around the seventh century, first mentioned in the Strategikon — a military treatise attributed to the Emperor Maurice. Although iron horseshoes appeared in the early imperial period, nailed horseshoes were introduced only in the tenth century.

In the Greco-Roman world, horses were more than a means of transport. They also had an important role in popular pastimes, especially in an activity prized by the elites — hunting. However, the premier spectacle, which fully capitalized on equine grace and speed, was chariot racing. Its origins can be traced back to ancient Greece, around 1500 BCE. No one other than Homer himself described the first chariot races, part of funeral games during the Trojan War. It was the beginning of a success story that would reach its apex in the Roman Empire, making the horse the superstar of the ancient world.

Like everything the Romans inherited from the Greeks, Roman chariot races were bigger and more expensive than their earlier counterparts. Up to six horses could pull a light chariot, racing in grand arenas like the Circus Maximus in Rome or later the Hippodrome in Constantinople. For the Romans, chariot races were an intoxicating sport, equivalent to modern-day Formula One or NASCAR, only with more lethal crashes and a volatile political aspect thrown into the mix. For a Roman emperor, the races were a unique opportunity to display benevolence, and commune with Roman subjects, thus bolstering his standing. But, this communication could backfire horribly. Undoubtedly, the most infamous event from the races is the infamous Nika Riot, which devastated Constantinople, almost toppled the emperor, and ended in one of the bloodiest massacres in antiquity.

Horses of Myths and Legend: Gods and Heroes

Their unique nature and versatility made ancient horses a vital element of mythology and legends. To the ancient Greeks, horses were the creation of Poseidon, the god of the sea, but also of horses. Poseidon was the father of numerous equines, of which the most famous was Pegasus, the winged horse that belonged to the Greek hero and slayer of monsters, Perseus. After achieving immortality, Pegasus was converted into the stellar constellation that bears his name.

Greek myths, and by extension, their Roman counterparts, are filled with equines possessing special powers. The Hippoi Athanatoi were immortal creatures who helped the gods in their tasks, like the four horses who pulled the chariot of Sun god Helios or the four wind gods of Zeus. Some horses were even able to speak and give warnings and advice to humans. Such is the case of immortal Xanthus, who tried to warn Achilles of his tragic demise. However, Greek mythology’s most famous example of a horse was not a living creature. The iconic Trojan Horse was a wooden horse used by the Greek army to conquer Troy.

Ancient Horse in Art and Legends

From its domestication, the horse became ubiquitous in ancient art, from the monumental reliefs of Assyria to Greek and Roman sculpture. This is unsurprising, as the horse’s many qualities placed it at center stage in the ancient world. As a result, the artists depicted a wide variety of equines, from mythological creatures, and free horses, to imposing beasts of war. The horses also figured prominently on the coinage, bolstering a ruler’s prestige, mirroring the myriad of monumental equestrian statues strategically placed in the towns and cities of ancient empires. The larger-than-life equestrian statue of Emperor Marcus Aurelius, one rare surviving example of monumental sculpture, became a model for equestrian statues in later periods.

For a fortunate few horses, their loyalty and reputation made them legends. Perhaps the best case is Bucephalus, the famous horse of Alexander the Great, who accompanied his master to the end of the known world. Following Bucephalus’ death in India, bereft Alexander honored his beloved horse by founding a city in his name. Perhaps this was the ultimate sign of the ancients’ admiration for their horses. But the ancient world was just the beginning of the relationship between horse and human, one of the longest love affairs in history, which continues to the present day.