How Did Matisse Make His Paper Cut-Outs? 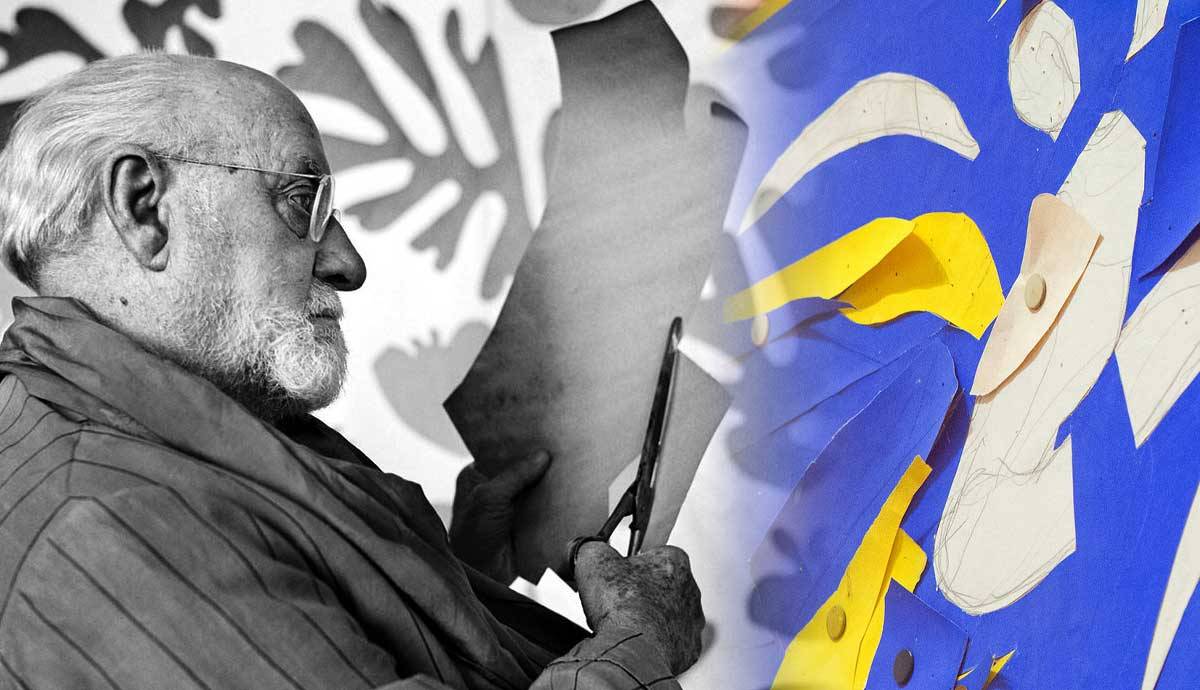 French 20th century artist Henri Matisse had a wildly prolific career that spanned a huge range of styles and approaches. But perhaps the most famous and radical phase of this great pioneer’s career came in his later years, when he began making richly colored paper cut-outs with humble paper and scissors. Deceptively simple, these paper cut-outs were the result of a dedicated process that the artist worked out carefully over time with the help of studio assistants. Here we discuss the techniques Matisse developed to harness the wonders of colored paper.

1. His Assistants Painted onto Sheets of Paper

Rather than relying on colored paper, Henri Matisse made his paper cut-outs using carefully hand painted sheets of paper. This meant Matisse could choose the exact colors he wanted to work with, rather than relying on a mass-produced product. It also meant he could play with varying surfaces. Sometimes his painted papers had a deliberately painterly surface, and other times they were smooth. Matisse employed his studio assistants to cut sheets of paper in varying sizes from a roll. They then painted onto these sheets with gouache paint, a quick drying, water-based medium that dries with an opaque finish. Matisse carefully selected these gouache colors from supply houses in Paris and Nice, choosing the most vibrant and eye-catching hues.

2. Matisse Cut into Paper with Scissors

When the paper was dry, Matisse arranged several sheets on the floor in front of him. Starting with a random piece, he would begin cutting into a sheet with scissors, letting the remaining shards fall to the ground. Photographs and films of Matisse making his paper cut-outs show him working with a large pair of scissors. But closer examination of his work shows he would have used a variety of different sized blades. Matisse made some of his paper cut-out designs from just one single sheet of paper, while he constructed others from a series of smaller shapes. His ultimate goal was to capture the essence of form through a series of elegant, refined shapes. The process, which he called “drawing with scissors”, took time, dedication and patience.

3. He Used Pins to Attach Pieces of Paper

Although Matisse’s paper cut-outs have a fresh, spontaneous feeling, they were in fact part of a careful, considered process that involved complex decision making. Matisse would temporarily pin pieces of paper in place using thumb tacks, sewing pins or even thin nails. Using nails rather than glue allowed him to easily move pieces around until he was happy with a final design. If you look really closely, Matisse even left evidence of these pin marks behind in many of his paper cut-outs. He often had a drawing board leaning on his lap during this stage, with a background sheet of paper, and the cut shards of colored paper could be laid out in varying arrangements on this surface.

Once Matisse was ready to stick down his paper cut-outs, he used a process known as ‘spot gluing.’ Small spots or dabs of glue were applied to the reverse of the paper cut-outs and attached to a background sheet. This way of working allowed the cut pieces to slightly lift here and there from the background, giving them a fresh, lively and almost sculptural form. This presentation style was important to Matisse, because it meant when his cut-outs were transported and displayed in gallery spaces, they still retained the informal spontaneity they once had while hanging around on the floors, boards and walls of his home studio in Nice.

Who Is the Most Famous French Painter of All Time?