How English Photographer Anna Atkins Captured the Science of Botany

A pioneer in 19th century photography, Anna Atkins was the first to demonstrate the full creative potential of the cyanotype. 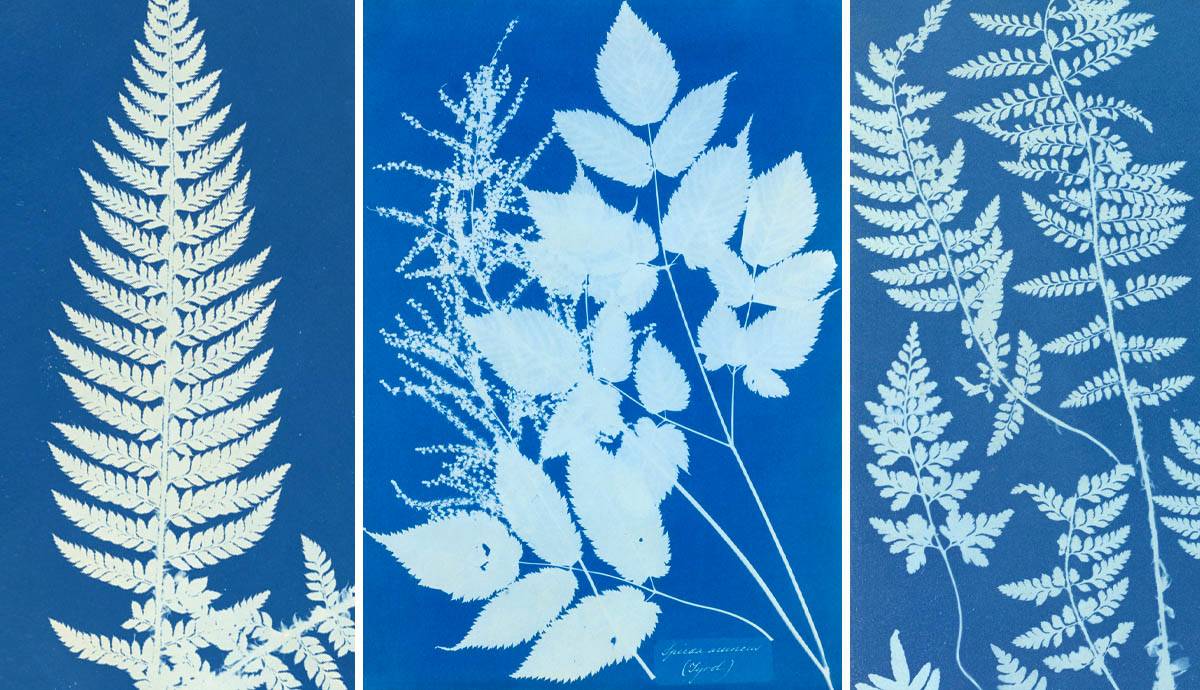 In 1841, English photographer Anna Atkins created her very first photograph. Many historians believe that Atkins was the first female photographer in the world. While there is no evidence to definitively prove that she was indeed the first, Atkins nonetheless helped pave the way for generations of women photographers to exercise their curiosity and creativity.

Atkins’ medium of choice was cyanotype photography, a camera-less technique that allowed her to capture detailed silhouettes of plant specimens on light-sensitive paper, which turned a brilliant shade of blue when developed in sunlight. Throughout her prolific career, Atkins combined the scientific impulse to make discoveries and document them accurately with the artistic impulse to create an object of beauty.

From early childhood in Kent, England, Anna Atkins’ unusual education and relationships helped shape her trajectory toward becoming Britain’s first botanical photographer. Born Anna Children in 1799, Atkins was raised by her father, who was a well-respected scientist in the fields of chemistry and zoology. Unlike most English women in the 19th century, Atkins received a thorough education on scientific topics, including botany, and even contributed engravings to her father’s published work. Atkins also had a close, lifelong relationship with a woman named Anne Dixon, a childhood friend who lived with the Children family and with whom Atkins collaborated on botanical photography experiments throughout her career.

When Atkins married, she moved with her husband to a family estate in Kent, where she enjoyed the luxuries of time and space to collect and study all the plant specimens that the English countryside has to offer. Atkins never had children, and she spent her days investigating, collecting, and cataloging various flora—and eventually photographing them.

Atkins learned about photography—a new phenomenon in 19th-century England—through correspondence with its inventor, her friend William Henry Fox Talbot. Another family friend, John Herschel, introduced his own invention of cyanotype photography to Atkins in 1841. (Herschel also mentored another female English photographer, Julia Margaret Cameron.) Atkins was instantly drawn to the cyanotype process. Within a year of learning this camera-less technique, Atkins had already mastered it, creating dozens of striking blue and white images of the plant specimens she had collected.

The Science of Photography and the Cyanotype Process

Cyanotype photography, also called sun printing or blueprinting, is a photography technique that, compared to other methods in the 1840s, was accessible and affordable for an amateur English photographer like Anna Atkins. This process did not require owning a camera or having access to expensive chemical materials. To create a cyanotype, the photographer begins with paper that is chemically treated with a light-sensitive solution of ammonium citrate and potassium ferricyanide. The object to be recorded is placed on the paper and the entire piece is exposed to sunlight for around fifteen minutes. Then, the piece is brought back indoors, the object removed, and the cyanotype image is fixed on the paper by washing it in plain water, at which point the uncovered areas of the paper turn blue, and the image appears as a white negative. The result is a highly detailed, highly contrasted silhouette of the subject.

The cyanotype process went on to become especially popular with architects and engineers, who used the process to make copies—or blueprints—of their designs. For Anna Atkins, she saw in cyanotype photography the potential to create accurate, scientifically useful records of her botanical specimen collection for study and reproduction.

The Rise of the Botanical Photograph: How Atkins Captured Plants

Making a record of a plant specimen with the requisite quality and accuracy to be scientifically useful is notoriously difficult when using drawing or engraving as the method of reproduction. Although Anna Atkins was experienced and skilled at scientific engraving, she found that the highly detailed silhouette of the cyanotype, which was created directly from the specimen itself, was a more scientific method than any attempts to render what she saw by hand.

After being taught the process by its inventor, the English photographer turned to cyanotype photography instead of traditional illustration to record botanical specimens for her first scientific reference book on British algae. Atkins explained, “I have lately taken in hand a rather lengthy performance. It is the taking photographical impressions of all, that I can procure, of the British algae and confervae are, many of which are so minute that accurate drawings of them are very difficult to make.”

Her comprehensive and successful efforts at botanical cyanotype photography helped establish photography as an accurate and effective medium for scientific illustration. But Atkins’ work stretched even beyond the scope of science. The English photographer also experimented with creating artistic compositions of her specimens and layering them with other objects, like lace and feathers. Such exercises demonstrated that photography could be a legitimate vehicle for exploring aesthetic properties like shape, form, texture, and transparency in addition to facilitating pure scientific accuracy.

In 1843, Anna Atkins self-published the first volume of her first photography book: Photographs of British Algae: Cyanotype Impressions. Although it was privately published with a very limited number of copies, it is considered to be the first published book to be illustrated with photographs. Atkins published a total of three volumes of British algae photographs between 1843 and 1853.

When she began working on Photographs of British Algae, the study of algae had recently been legitimized by an 1841 publication by William Harvey titled Manual of British Algae. Atkins originally set out to contribute cyanotype illustrations to Harvey’s original publication, which did not include any images, but she ended up gathering her own specimens and labeling and organizing them herself. Instead of using traditional letterpress printing to label the specimens, Atkins incorporated handwriting that was created through the cyanotype process, demonstrating the attention she paid to the aesthetic properties of her specimens. In fact, Atkins was specifically drawn to the elegant and organic shapes of the algae—or “flowers of the sea” as many called them—and their potential to form beautiful compositions on the page.

Her main goal was to create a volume of accurate reproductions of algae species that could be used for studies. The complete book contains over 400 types of algae with numerous images of each specimen. Atkins’ approach to creating the book was as innovative as it was involved. Every page of every copy of Photographs of British Algae was produced entirely by hand, so over the course of a decade, Atkins only completed around a dozen copies of her book, some of which are now preserved and sometimes exhibited at major cultural institutions, including the Metropolitan Museum of Art and the British Library.

How Anna Atkins Showed the Relationship Between Science and Art

In addition to her first multi-volume publication, Cyanotypes of British Algae, Anna Atkins produced at least three other albums packed to the brim with cyanotype impressions of hundreds of plants from across Britain and abroad. Atkins carefully preserved all the specimens she used in her cyanotype work and eventually donated her vast collection to the British Museum. By the time she died at age 72, Atkins had earned the respect of the scientific community for her innovations in botanical photography.

Only a few decades later, however, Atkins’ signature—the initials “A.A.”—were mistakenly attributed to an “anonymous amateur” by a collector who had happened upon some of her cyanotype work, and her name and important contributions were largely forgotten. Fortunately, in more recent years, Anna Atkins’ photography has been reattributed and reevaluated, making abundantly clear the scientific and artistic value it still holds even today. The English photographer is now remembered as both a key contributor to science and an influential woman artist of the 19th century.

Photography was still a brand-new phenomenon when Anna Atkins began making cyanotypes, and its potential was yet unknown and unlimited. Atkins proved that photography could facilitate an important step forward in the creation of educational scientific materials. But she also recognized that photography could be more than just utilitarian. It could also accentuate the aesthetic value of the plants to which she devoted her life’s work. That’s why her brilliant blue cyanotypes of plants still resonate with botany enthusiasts and museum-goers alike.