HomeArtistsJacob Lawrence: Dynamic Paintings and the Portrayal of Struggle

Jacob Lawrence: Dynamic Paintings and the Portrayal of Struggle 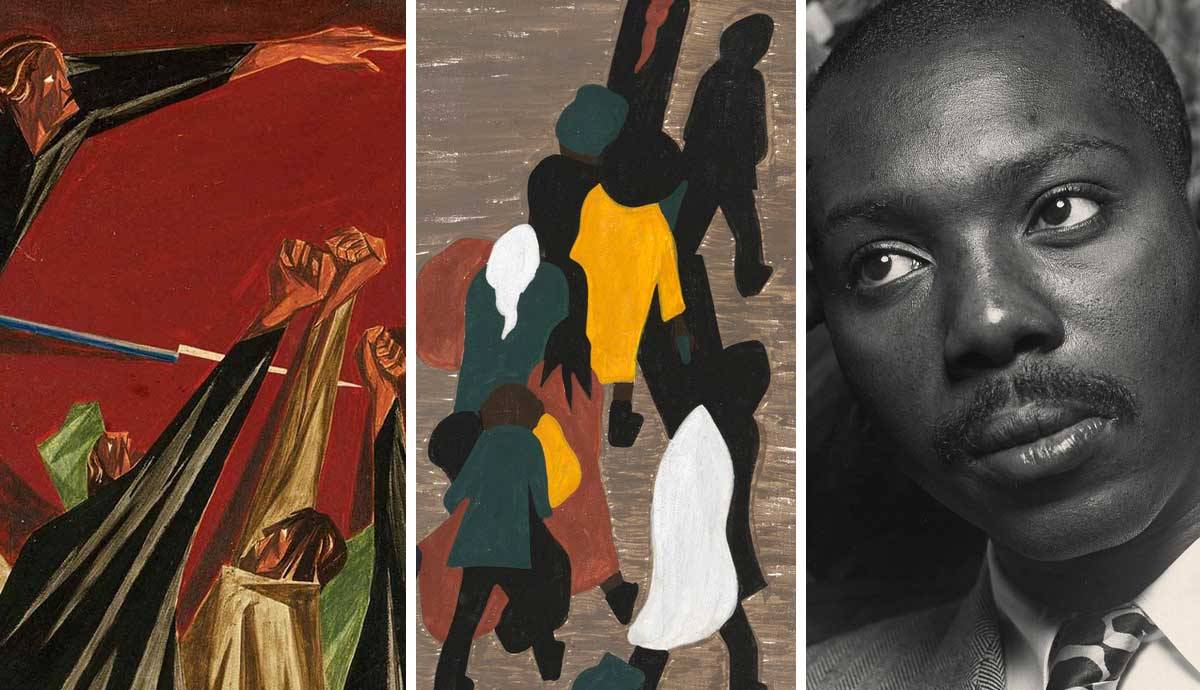 Jacob Lawrence is well-known for his series portraying the lives of important African Americans such as Harriet Tubman and Frederick Douglas. His Migration series brought him recognition in his early twenties and it is still considered his most famous work. The subjects of the artist’s dynamic paintings range from political to personal and often tell stories about struggles as well as hope.

Jacob Lawrence was born in 1917 in Atlantic City, New Jersey. He was the son of Southern migrants who moved from rural communities in the South to Midwestern and Northeastern cities during the Great Migration. Being a child of the Great Migration greatly influenced his life and career as an artist. Lawrence and his siblings were put into foster care after his parents separated. Three years later, the 13-year-old Jacob Lawrence and his siblings moved to Harlem to live with their mother.

After the children moved to Harlem, Lawrence’s mother enrolled them in the arts and crafts classes at the after-school program of Utopia Children’s House. The Children’s House was located in Central Harlem and offered after-school care and free lunches for the children of working mothers. It was at the Utopia Children’s house where Jacob Lawrence’s artistic career began. He skillfully created decorative masks and his talents were recognized by the painter Charles Alston. Alston was a teacher there at the time and became one of Jacob Lawrence’s most important mentors. Since Charles Alston was an influential artist during the Harlem Renaissance, Lawrence met other members of the movement through his relationship with Alston.

The movement and its members had an immense influence on Lawrence and his work. The vibrant colors, the people, and the energy that Lawrence experienced during that time in Harlem inspired his work. He saw Augusta Savage, Charles Alston, and Claude McKay, who were all figures of the Harlem Renaissance, as the people who had the greatest influence on his career.

Augusta Savage did not only like Jacob Lawrence’s work, but she also supported his career as an artist. In 1937, she introduced Lawrence and his work to the hiring board of the WPA Federal Art Project, which was a patronage program conceived during the Great Depression in order to fund the visual arts in the United States. Despite the fact that the hiring board reacted positively to his work, they thought that he was too young and that Savage should come back with him the following year. Lawrence said that he forgot all about it, but that Auguste Savage did not. When he was 21, they hired him to create paintings for $23,86 a week, which was a decent wage during the Depression-era.

Lawrence’s upbringing in Harlem and how he experienced his environment influenced the artist’s unique use of vibrant primary colors, patterns, and dynamic and energetic style. Another characteristic of his work is the depiction of figures through flat shapes and planes. The combination of this energetic style and reductive form was dubbed ‘Dynamic Cubism’ by the artist himself.

The patterns in his paintings stem from the way Lawrence saw the world around him. The artist once said that he does not really see the people in a room but only patterns. He saw people and objects like forms and planes relating to their environment. This specific way of perceiving everything around him is visible in the abstract shapes representing figurative themes in his artworks.

From early on in his career, Jacob Lawrence told stories through his art by creating series with a narrative. One of his earliest works concentrates on the life of Toussaint L’Ouverture, who was the leader of the Haitian independence movement during the French Revolution. Since Lawrence thought that one artwork would not be sufficient to portray the several achievements of the Black revolutionary, he created a whole series from 1937 to 1938. Lawrence grew up being told about historical African American figures and he often included these stories in his work. For example, he created a series about the life of historical heroes such as Harriet Tubman and Frederick Douglass.

In his series Struggle: From the History of the American People, Lawrence depicts and interprets essential moments of the American Revolution and the beginning of the republic between 1770 and 1817. The works are supposed to depict the struggles of creating a nation and building a democracy. A central theme of the series was the portrayal of overlooked historical characters such as women, African Americans, and Native Americans.

The first panel of the series shows someone standing in front of a crowd with a rifle in one hand and the other hand pointing forward. Like the other panels of the series, it was labeled with a quote. The first panel’s caption is a quote by Patrick Henry – who was active during the American Revolution. It reads: … is life so dear or peace so sweet as to be purchased at the price of chains and slavery?.

Jacob Lawrence did not only depict the life of historical African Americans or significant political subjects, but he also created a series about a very personal experience. During the time from 1949 to 1950, the artist voluntarily stayed at Hillside Hospital in Queens because he was suffering from depression. The stay at the hospital resulted in the creation of Lawrence’s Hospital series. Paintings such as Sedation or Creative Therapy document the artist’s experience at the psychiatric facility.

What Was the Great Migration?

Out of all of Jacob Lawrence’s series, the paintings about the Great Migration are arguably his most famous works. The Great Migration took place from 1916 to 1970 and was one of the biggest movements of people in the history of the United States. Roughly six million African Americans moved from the South to states in the North, Midwest, and West. Many of them moved to escape oppression and racial violence and to pursue better wages, living conditions, and education. Places like Chicago, Detroit, Cleveland, and New York were populated by large numbers of migrants from the South.

The movement to these new cities and the better economic and educational opportunities had an immense impact on American culture. The Great Migration led to a boom in cultural movements, artistic expression, and the emergence of many great African American artists. The Harlem Renaissance and its influence on Jacob Lawrence is an example of this development.

Jacob Lawrence’s ‘Migration Series’ consists of 60 panels portraying different aspects of the Great Migration. The artist created the series between the years 1940 and 1941. Lawrence himself was the son of migrants who moved during the Great Migration, but he also did extensive research on the topic. He spent months at the library and listened to the stories of his parents, family, and neighbors to gather information about the historic movement. After that, he wrote a short text which he later used for the captions of his paintings. Every panel of the series is therefore labeled with a short narrative that further explains the image. The captions of the panels say things like Letters from relatives in the North told of the better life there or The trains were crowded with migrants.

By depicting small groups of people or families as well as large crowds, Jacob Lawrence told stories from the perspective of the individual as well as the collective. One panel, for example, shows the personal moment of a woman reading a letter from a friend or family member while lying in bed. Another painting shows how the movement gained momentum and more and more people left their homes for a better future.

According to the artist, Jacob Lawrence finished the whole series in only six to eight months. He used quick-drying tempera paint and hardboard panels, which were affordable materials. After spreading all the panels out, Lawrence made sketches with a pencil, which he then filled with color. He said that he did not mix colors because he wanted the 60 panels to seem like a unit. Therefore, the Migration series is supposed to be viewed as one work. Jacob Lawrence’s Migration series portrays the struggle, hope, and hardships people experienced during an important moment in history.

The creation of the series was a milestone for the artist’s career. Jacob Lawrence became a recognized artist when he was only 24 years old after his Migration series was shown at the Downtown Gallery in New York in 1941. The Museum of Modern Art in New York obtained part of the series which made Lawrence the first African American artist whose works were a part of the MoMA collection.