Medieval manuscripts are full of strange animals — rabbits, snails, dragons, and more. Their meanings, opaque to today’s viewers, form one of the many tantalizing mysteries of medieval art. 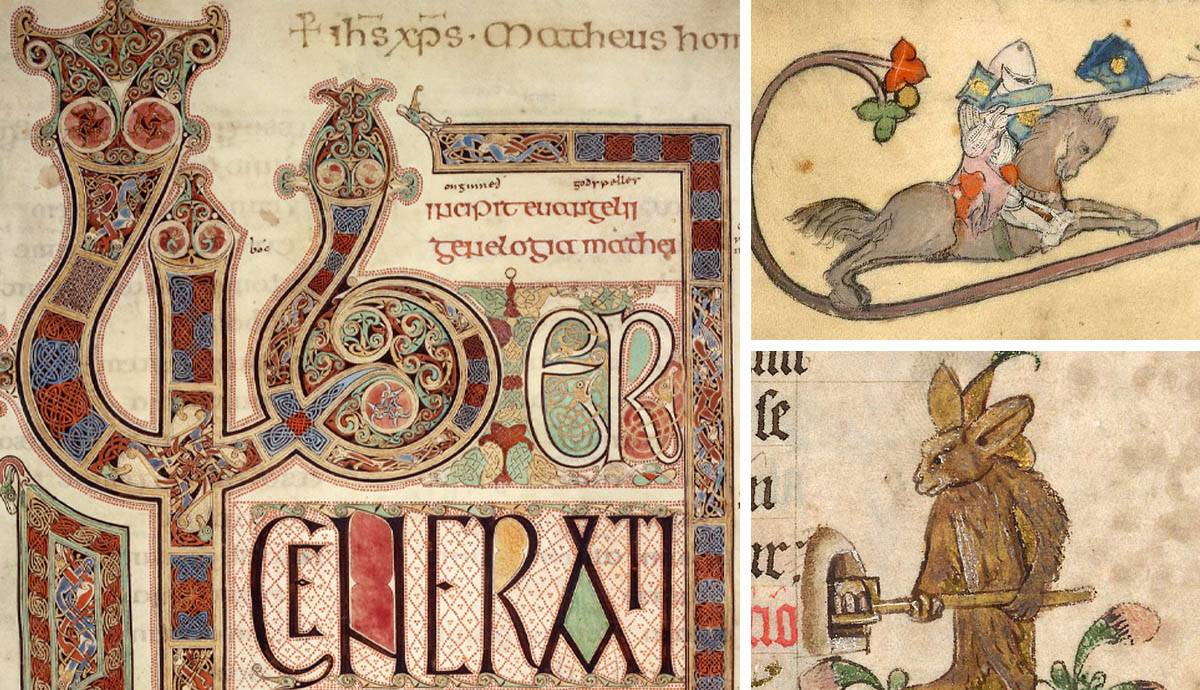 Medieval art abounds in animals, both real and imaginary. Common creatures such as lions, birds, and monkeys appear beside fantastical dragons, griffins, centaurs, unicorns, and grotesques. They occur everywhere from large sculptures on Gothic cathedrals to tiny patterns in luxury textiles. Medieval manuscripts present no exception. Whether featured in the main illustrations or lurking in the margins, animals show up in bizarre situations that scholars struggle to explain today. Like everything in the medieval Christian world, each of these animals conveyed religious symbolism and moral messages. However, there’s clearly much more to the story than that.

In medieval manuscripts, animal images appear most frequently as decorative details with little relationship to the meaning of the text. They occur in the ample white space, or within decorated capital letters, frames, borders, and more. Humans and human/animal hybrids called “grotesques” or “chimeras”, as well as foliage appear here as well.

In insular manuscripts — those made in early medieval monasteries of the British Isles — profuse animal and human forms occur within the characteristic interlacing decoration that often covers entire letters or pages. Manuscripts like the Book of Kells and the Lindisfarne Gospels practically invite viewers to play Where’s Waldo, finding all the creatures hidden in a single image.

In many cases, the interlace itself becomes the long and stylized bodies of birds, snakes, and terrestrial animals, with their heads and claws sprouting from the ends. This style relates back to pre-Christian Celtic and Anglo-Saxon metalworking traditions, such as that seen in the treasures of the Sutton Hoo ship burial. In a Christian context, these animal forms may be interpreted for their religious connotations or as apotropaic devices (symbols believed to impart protection wherever they appear).

The Wild World of Medieval Marginalia

In the later tradition of western European manuscript illumination in the 13th and 14th centuries, animals appear in copious illustrations on the side and bottom margins. These images are usually termed “marginal illustrations” or “marginalia”. On some occasions, they might depict animals behaving naturally, or humans working, praying, etc. However, marginal images are rarely so straightforward.

More often, they are comical, rude, or even profane. Within the animal kingdom, a variety of creatures participate in human activities like baking bread, playing music, or mimicking doctors and members of the clergy. We frequently see rabbits turning the tables on hunters, snails battling knights, monkeys wearing human clothes, and foxes preying on other animals in decidedly human fashion. Such scenes are quite amusing and ridiculous, though often somewhat dark as well. The human and grotesque figures, which are not our subject today, are rarely polite or family-friendly. However, such marginal imagery commonly appears in religious manuscripts, alongside deeply pious subject matter. Why? This mysterious paradox continues to occupy scholars and contributes to the popular fascination with these artworks.

Medieval thought provided Christian meanings for just about everything under the sun, and animals were no exception. In fact, an entire genre of popular books called bestiaries set forth the moral and religious connotations of animals both real and imagined. Think of bestiaries like illustrated encyclopedias of beasts, containing an image and short text for each creature. Unlike our modern versions, these texts used animals, both real and imaginary, to convey moral and religious messages based on the medieval understanding of each creature. Some animals had positive moral and religious connotations, while others were associated with sins like gluttony, sloth, or lust.

Medieval bestiaries had their roots in an ancient Greek text called the Physiologus, but with the addition of heavy Christian allegories. The phoenix — a creature once believed to regenerate itself by being reborn through fire — acquired a rather obvious connection with Christ’s death and resurrection. Today, we recognize that the phoenix is a mythological creature, but much more ordinary beasts had such associations as well. For example, elephants were believed to embody kindness and redemption and be strong enough to carry entire castles, but to have no knees. The artists responsible for illustrating most bestiaries had never seen an elephant (or phoenix!) in person, so their representations could be highly imaginative and entertaining. The interpretations found in bestiaries, however, only go so far in explaining animals in medieval manuscripts.

As 21st-century readers are used to the minimalist layout of today’s printed books, many of us feel a huge disconnect with the layers of seemingly-unrelated imagery visible in so many illuminated medieval manuscripts. It is very difficult for us to see and think about these images as their original owners and makers would have, putting us at a clear disadvantage when trying to understand the presence of marginal imagery. That being said, here are some connections and theories that may help to clarify at least some of the imagery.

Animals of Fable and Legend

Marginal scenes sometimes relate to known medieval proverbs, legends, and fables. For example, the many appearances of crafty foxes refer to a specific character called Reynard the Fox. This trickster had his origins in Aesop’s Fables but later became the subject of medieval satirical literature. He outsmarts a variety of other anthropomorphic animals and causes lots of trouble before getting his just deserts. The fact that Reynard and his co-stars are animals rather than humans may have allowed them to serve as palatable conduits for parody and social critique. The many appearances of animals performing human activities, particularly those of the upper and ecclesiastical classes, obviously invite reading as a parody. However, who or what is being made fun of is up for interpretation.

Laughing, but at Whose Expense?

Although the strangeness and specificity of marginal illustrations seem to suggest once-obvious references that escape us today, that’s not necessarily the case. Medievalist Michael Camille (2005), who wrote extensively on the subject, proposed instead that marginal images have multiple, non-stable meanings. In other words, what an illustration means may depend in part on who is doing the interpreting. The fact that marginal figures tend to mimic the behavior of the upper classes would initially seem to suggest that these elites were the intended subjects of satire by the lower-status artists who drew them. On second thought, does this really make sense, given that the upper classes commissioned and owned these manuscripts? Clearly, the people who paid for the books were unbothered by these marginal scenes. Some modern viewers see images like rabbits attacking hunters as commentary on the weak fighting back against stronger oppressors. Equally, though, these images may actually make fun of the weak and confirm the superiority of the high-statue people who owned the books.

One suggested interpretation of scenes like the music-making animals is that they poke fun at people who try to do things they are not any good at. The pig, for example, cannot play the lyre because he has hooves instead of hands. On a related topic, a medieval fascination with inverting the natural order of things may explain the profusion of scenes showing animals behaving as people. In this case, marginal scenes would be amusing because they were clearly wrong, thereby reinforcing what was right. This idea of the world turned upside down was also at work in medieval festivals where children or commoners would be named priests or kings for a day.

Some art historians have read marginal images as instructive, reminding viewers of the right and wrong ways to live a good, moral, Christian life. This isn’t mutually exclusive with the ideas mentioned above. Parody and inverted norms can all be powerful tools for instilling socially-acceptable behavior by showing its opposite. One possible example of instructive marginal imagery involves The Hours of Jeanne d’Evereux. A luxurious, 14th-century French royal prayer book, it has almost 700 marginal illustrations.

The manuscript belonged to a young French queen, possibly given to her as a wedding present. Scholar Madeline H. Caviness (1993) has argued in a widely-read article that the manuscript’s abundant marginal images were designed to teach this young bride to be a faithful wife. (Caviness’s is only one among many interpretations of marginal illustrations to involve sex). One point against arguments like this, however, is size. The Hours of Jeanne d’Evreux is tiny; each page measures only 9 3/8” by 6 11/16”. With the marginal illustrations taking up only a fraction of that small space, it’s difficult to imagine such miniature drawings successfully carrying out significant moral instruction.

On the Fringes of Medieval Manuscripts

One additional school of thought, proposed by Michael Camille, correlates the margins of medieval art and architecture with the margins of society as a whole. Camille expanded on this theme in his influential book Image on the Edge, well summarized here. His general idea was that depicting people and behaviors outside of respectable social norms in the margins soothed mainstream anxieties about their unconventional behavior by putting them firmly on the periphery. This idea perhaps goes further to explain the human and grotesque figures (which often engage clearly in such marginal behavior) than it does the animals.

On church buildings, in particular, the representation of the deviant and even sinful on the exterior has been suggested to put them in their rightful place, excluding them from the sacred interior. Such images may have even offered protection from similarly unwanted forces in real life. The same idea could also play out between the margins and interior text of a medieval manuscript. However, this explanation thrives in a religious context and does not explain why marginalia are equally prevalent in secular manuscripts, such as romances, textbooks, and even genealogical records.

Illuminated medieval manuscripts provide visual feasts for those who spend enough time with them to notice all their little details. They still provide delightful visual feasts, even if their specific meanings and references still elude us. Funny and quirky animal forms, and lots more, are there for us to enjoy in lots of strange places if only we pay enough attention to find them. Marginal animal illustrations entertain and amuse us today, and there’s no reason to believe that they didn’t also do so for their original medieval viewers.