HomeArtistsPaul Cézanne’s Landscape Paintings in the South of France

Paul Cézanne’s Landscape Paintings in the South of France

Paul Cézanne’s landscape paintings most famously represent scenery in his native region of Provence. They demonstrate this great master’s groundbreaking ways of depicting form and color. 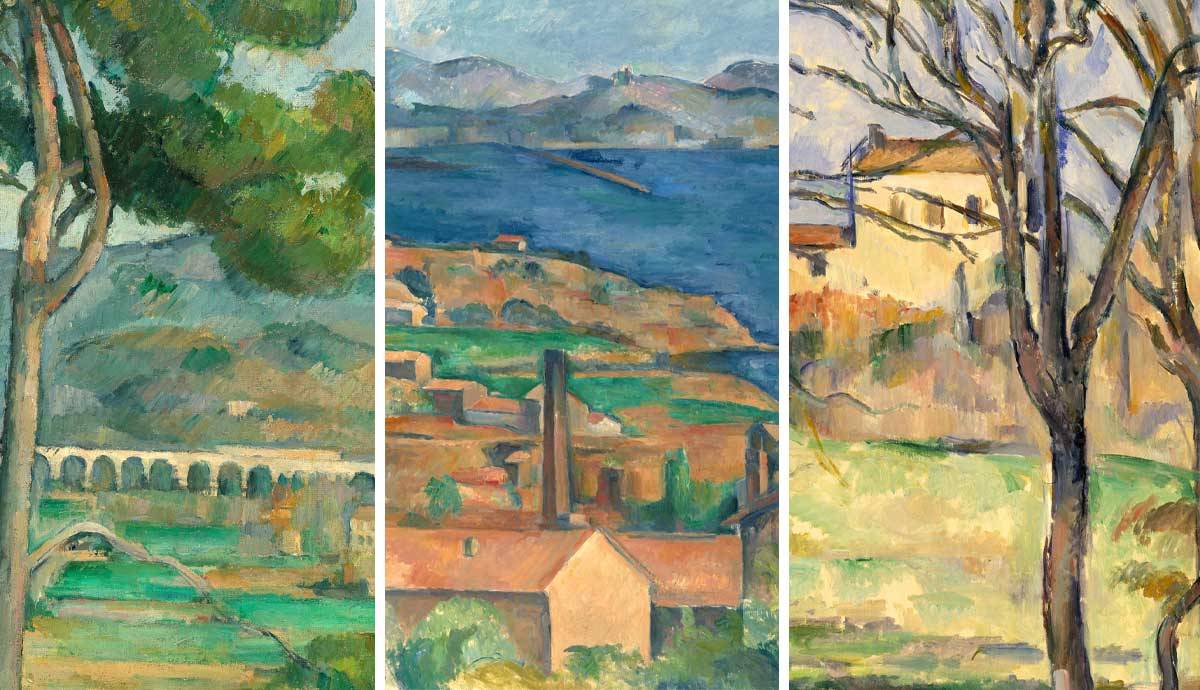 Modernist painter Paul Cézanne (1839-1906) is widely considered one of the most influential artists of the 19th century. After beginning his career as an Impressionist and exhibiting at some of the famous Impressionist exhibitions in Paris, Cézanne moved back to his southern hometown of Aix-en-Provence and began radical experiments with new ways of painting the world around him. His ways of creating form, rejection of linear perspective, and efforts to bring solidity to the Impressionists’ innovations laid the groundwork for the Cubist movement and abstraction. During his lifetime, Cézanne made dozens of landscape paintings depicting the mountains, fields, quarries, and coastline in Provence. Paul Cézanne’s landscape paintings are among his most famous works.

Paul Cézanne was born in Aix-En-Provence in the Provence region of southern France. His family lived on a property called Jas de Bouffan, which he would eventually inherit. Unlike most of his contemporaries, who permanently left their native locales for Paris, then the undisputed capital of the art world, Cézanne stayed in the countryside. He did spend a few years in Paris early in his career, but he quickly moved back to Provence and painted the majority of his mature works there. Accordingly, his most famous landscape paintings portray Provencal settings and have made those landmarks internationally famous.

Like his Impressionist compatriots, Cézanne did most of his painting out of doors, sur le motif as Cézanne called it, but he took his time with it. He was deeply committed to the relationship between nature and his art, and it was common for him to spend months looking at the same subject matter, though not necessarily from the same point of view. Despite the intentionally-unfinished appearances of his paintings, nothing in Cézanne’s art was ever spontaneous or left to chance. He was not interested in transient and fleeting visual effects, but rather in the solidity of forms. This is probably why monumental and unchanging landscapes were among his favorite subjects.

Cézanne’s most iconic subject was the Mont Sainte-Victoire, the distinctive profile of which appears in countless of his canvases. He painted this mountain as many as one hundred times. It even shows up in the background of his famous Bathers painting. Views of Mont Sainte-Victoire are the closest Cézanne ever got to painting in series the way Claude Monet did. Cézanne painted this mountain so often, especially towards the end of his life, that it’s possible to track the development of his artistic style through his portrayals of it. His late paintings of Mont Sainte-Victoire show the full extent of his influential experiments in new ways to render forms.

In any Cézanne painting, no matter the subject matter, space does not operate the way you might expect if you’re used to traditional, naturalistic painting. Like most other modernists, Cézanne rejected academic painting. In his case, he did not believe that its ideas about portraying perspective and volume accurately represented real visual experiences. Instead, he experimented with showing objects from multiple viewpoints at once and building up forms through color and brushwork rather than light and shade. Because of this, different aspects of his paintings appear as though seen from different vantage points, making it difficult to locate yourself within the composition.

People rarely stand still in one place and view a subject from a single, unchanging vantage point, and Cézanne’s art aimed to reflect that. This is particularly relevant to landscape painting because people traveling over the land will invariably get to observe the same mountain or field from different angles and distances during their journeys. This idea of including multiple vantage points in the same composition was highly influential and directly inspired the Cubists.

Although Cézanne was never a big fan of linear perspective, his earlier paintings provide some sense of receding space. In Mont Sainte-Victoire with the Viaduct of the Arc River Valley (shown above), there are clear foreground trees and middle-ground landscape, with the mountain appearing away in the distance. By the last decade of his life, however, his compositions had flattened significantly. In the painting of the Chateau Noir shown below, there are still three compositional registers, but they seem to be simply layered on top of each other, and their distance relationships are difficult to understand.

Cézanne created a sense of spatial depth partly through color, his biggest artistic interest after form. He exploited the way that warmer colors optically seem to push forward and cooler tones appear to pull back into the distance. By rendering foregrounds and middle grounds in browns and greens with backgrounds in blue, he was able to naturally imply a certain degree of depth without using other perspectival techniques.

However, adding little touches of those warmer colors into the background elements complicated this illusion. A few hints of brownish-tan in the background interfere with blue’s natural tendency to recede, for example, sending the once-distant mountain forward towards the lower-lying fields in front of it and compressing the entire composition. Areas of blue added into the foreground similarly give the appearance of sending it slightly backward and compound the sense of flattening.

The Constructive Stroke and the Simplification of Form

Cézanne’s brushwork also contributed to this characteristic flattening of pictorial space. Traditionally, naturalistic artists used atmospheric perspective alongside linear perspective to imply depth in their landscape paintings. This technique involved rendering objects in the foreground in darker colors and tighter brushwork than objects in the background. Instead, Cézanne painted every inch of his paintings with the same short, hatch mark-like brushstrokes, and this uniform treatment in all areas of the painting also increased the sense of flatness in his compositions. His last works from 1904-6 look hazy from a distance and seem like collages of colored paper squares up close.

Brushwork was, in fact, one of the major ways that Cézanne built up form in his paintings, whether an apple, a bather, or the coastline at Marseille. He called it the constructive stroke, and he used it to create solid, geometric forms without a great degree of detail. Cézanne’s landscape paintings simplified elements like trees, houses, and fields to their most basic shapes. His advice to a fellow artist to treat nature by the cylinder, the sphere, the cone pretty much sums up his approach. The simple countryside homes that so often appear in his Provence landscape paintings demonstrate this best. They’re often little more than cubes with pyramids for roofs and squares for windows. Honoring the solidity of forms was important to Cézanne, who had moved away from Impressionism expressly because of its lack of solidity.

While Mont Sainte-Victoire is clearly his best-known and most frequent landscape subject, Cézanne also painted and sketched many other views of his native Provence. These include the nearby harbor towns of Marseille and L’Estaque, where his paintings pair the simplified forms of humble coastal dwellings with expanses of blue sea, the ruined castle Château Noir, and his family’s property in Aix, the Bibemus Quarry, and scenes of the surrounding countryside. Of course, he also painted landscapes in the general Paris vicinity, such as in the town of Auvers and in the Forest of Fontainebleau, but by far the majority were set in Provence.

Given his focus on the solidity and unchanging nature of form, the Bibemus Quarry paintings are particularly compelling. What better subject for him to return to over and over than these monumental and ancient rock formations? Cézanne’s unique approach to form is most apparent in his angular treatment of the jagged, russet-colored rocks, which he juxtaposed with the green plants growing amongst them. This local quarry had already been abandoned by the time Cézanne first visited, and nature had started to reclaim the area.

Spending most of his career far from the artistic center of Paris did not prevent Cézanne from achieving great influence. It took a while for his contemporaries to catch onto his radical innovations, but by the end of his life, he had become a legend and a hero to younger artists. The great Cubist Pablo Picasso openly claimed him as a forefather, as did Henri Matisse, who had been inspired by Cézanne’s bold use of color. His reputation as a game-changer remains today, and even the non-artistically inclined tend to know his name. Thanks to his prolific nature, Cézanne’s paintings, drawings, and watercolors appear in the collections of large and small museums all over the world.

Major institutions often have entire galleries dedicated to him. Many of these exhibited works depict Mont Sainte-Victoire, the Bibemus Quarry, and other scenes of the Provençal landscape. Entire exhibitions, often with record-breaking attendance, center on things like Cézanne’s rock and quarry paintings or Cézanne in Provence. Cézanne’s revolutionary ideas about portraying the world are not so unusual to us anymore today, but we still remember him as a great artistic genius, for good reason.