The Roman Navy: When Rome Ruled the Sea

While it is the legions that come to mind when we discuss Rome’s military might, the Roman navy played a vital role in building and maintaining the Roman Empire. 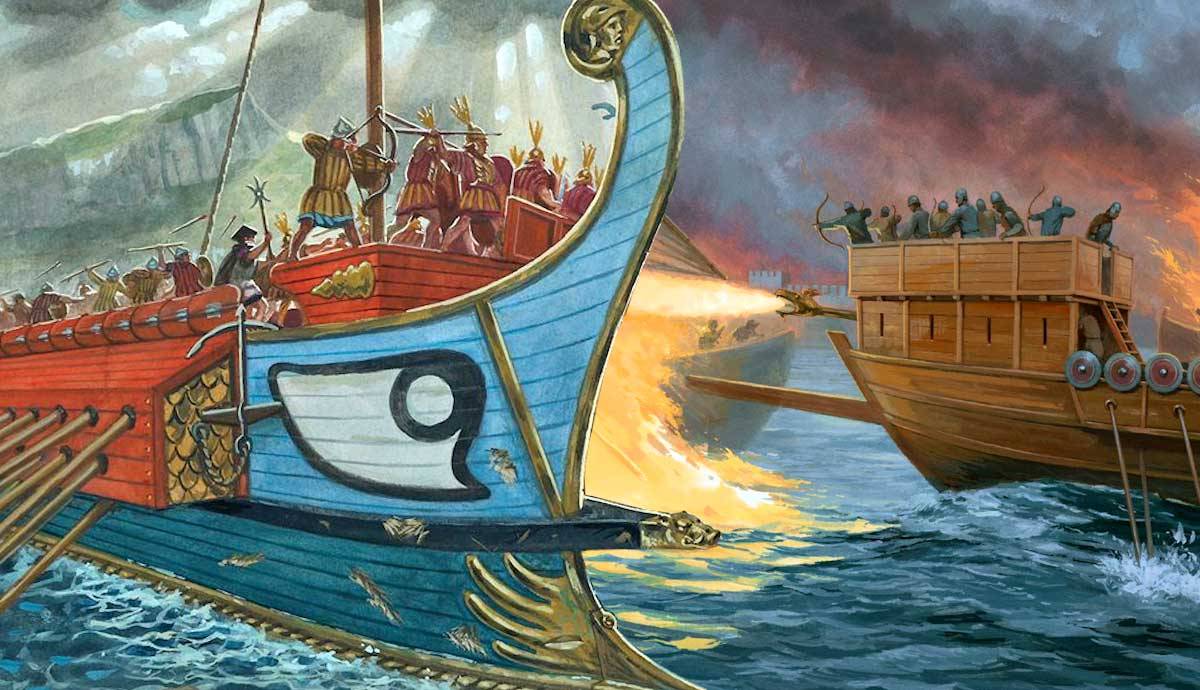 Less famous than the legions, the Roman navy had an essential role in establishing and expanding ancient Rome’s power and influence. Comparable to the Georgian navy that secured British dominance over the world’s seas by the late eighteenth century, the Roman navy was crucial in maintaining Rome’s mastery of the Mediterranean and other seas. From oceans to rivers, fleets of large and small warships patrolled the waters, eliminating hostile threats and keeping trade and passenger routes safe.

At the height of its power, the Roman navy employed tens of thousands of sailors and was, at least in numbers, the largest navy that ever existed. In the beginning, however, the Romans were not a maritime superpower. It would take a bloody and brutal war against a superior enemy for the Roman navy to be born. As with any origin story, it is a fascinating tale.

The Dawn of the Roman Navy

The story of the Roman navy began in the third century BCE, during one of the bloodiest and most costly conflicts that took place in the Mediterranean Sea. At the time, Carthage was the dominant naval power in the Western Mediterranean. This powerful state on the coast of North Africa established colonies in Spain, Sardinia, and Sicily. When its possessions on Sicily were threatened by a rising power from Italy — the Roman Republic — Carthage dispatched its mighty fleet to deal with the nuisance. And so, the First Punic War began.

At the onset of the war, Rome had a vastly inferior naval force and lacked seaborne combat experience. Yet, things were soon to change. According to the historian Polybius, who left us a detailed account of the war, the Carthaginian misfortune turned into a stroke of luck for the Republic. Using a shipwrecked enemy’s boat as a template, in 260 BCE, the Romans embarked on a large building program. In a mere 60 days, Rome built its first significant navy, consisting of 100 large quinqueremes and 20 smaller triremes. Yet, Carthage’s superior seamanship and numbers — over 300 ships — could not be easily outmatched. Thus, at the Battle of the Lipari Islands, the Roman navy was baptized in fire and suffered its first defeat.

The Romans had considerable resources to rebuild their fleet but they lacked experienced sailors and captains. Contrary to popular belief, galley crews were not slaves but expensive and skilled freemen. Rome had to turn to its army conscripts, teaching them rudimentary rowing and maneuvers on mock-up wooden ships on shore. However, the haphazardly assembled and trained crew had no chance against their veteran Carthaginian counterparts. As a result, the Roman warships remained an easy target for the enemy, who would maneuver their vessels past an opposing ship and break its oars, leaving it crippled and vulnerable. Then, the attacker would ram the helpless boat and leave it to sink.

To level the playing field, the Roman engineers invented the corvus. This ingenious device was essentially a wooden boarding ramp with a long metal spike at the bottom. After the Roman warship rammed into an enemy’s hull, the corvus would be lowered, locking the two ships together, turning the naval combat into a land battle. Close infantry combat was something Rome happened to excel at.

These new tactics bore their first fruits at the Battle of Mylae in 260 BCE when the Romans caught the Carthaginians by surprise, boarding and destroying or capturing the enemy ships. Then in 256 BCE, the Romans scored a major victory at the Battle of Cape Ecnomus. In one of the largest naval engagements in history, 300 Roman ships defeated a 350-strong Carthaginian fleet, sinking 30 and capturing 64 hostile warships.

Despite their naval triumphs, Roman naval losses during the First Punic War were extremely high. Rome lost as many as 600 warships, over 1000 transports, and more than 400,000 men! However, it was not Carthage that was the culprit. Most of the casualties were victims of the Roman practice of sailing in rough weather, as the weight of the corvus, and its position on the bow made ships unstable in rough seas. A year after Ecnomus, a heavy storm devastated a Roman invasion fleet, sinking 384 ships. This was also the last recorded use of the corvus,  which was replaced by a smaller and simpler gang-plank.

The Masters of the Mediterranean

Despite high casualties, the Romans pressed on, replacing lost ships and training fresh crews. Finally, in 241 BCE, at the Battle of Aegates, the Roman fleet dealt a decisive defeat to the enemy, forcing Carthage to sue for peace, bringing the First Punic War to a close. While two more wars with Carthage would follow, the extent of Roman naval victory was so complete that when Hannibal invaded Italy, he had to do it by land. The remains of the Carthaginian fleet did not dare to challenge the supremacy of the Roman navy.

After securing dominance over the Western Mediterranean, Rome looked East. In 192 BCE, when war broke out with the Seleucid Empire, Lucius Scipio, the brother of renowned general Scipio Africanus, marched his army overland with the navy taking a supporting role. The Seleucids, only a shadow of their once mighty Hellenistic Empire, still possessed a large fleet, so transporting the Roman army by sea was a risky proposition. However, in 190 BCE, Roman warships defeated the Seleucid navy at the Battle of Myonnesus. A few weeks later, the victory at Magnesia erased Seleucid Empire from the map. The Romans were now masters of the entire Mediterranean. Only Rhodes, a Roman ally, and Ptolemaic Egypt, which was by then in decline, were left with significant naval assets.

The Scourge of Piracy

Despite their naval victories in prior decades and despite the navy’s role in solidifying and expanding the Roman Republic, the fleet remained second to Roman land forces. This led to one of the most complete processes of naval disarmament in history.

As a result, the Roman navy could not protect vital trade routes and port cities from a new menace. By 102 BCE, more than a thousand pirate ships preyed on the vulnerable Mediterranean shipping lanes. More than 400 coastal towns had been sacked, their populations sold at Roman slave markets. Even Rome, the very center of the Republic, was not spared. Pirates threatened vital grain imports, and in 67 BCE, they came to the very doorstep of the capital, raiding the harbor of Ostia.

It was a step too far. The same year, the Senate sent Pompey the Great to eradicate the outlaws. He fulfilled his task splendidly. Marshaling vast resources, Pompey assembled a large fleet and systematically targeted pirate coastal strongholds. Within a year, the Mediterranean Sea was free of the pirate scourge. Thousands died in the naval “blitzkrieg,” and thousands more were crucified or sold to slavery.

However, the secret of Pompey’s pacification of the “inner sea” was not violence. Many pirates were pardoned, resettled to inland areas, and given land for farming. In turn, this boosted Rome’s economy. A smaller number of pirates were allowed to operate, but in the service of the Republic, securing Rome a steady stream of slave labor.

A few decades after he cleared the Mediterranean of piracy, Pompey died in one of the many civil wars that tore the Roman Republic apart. Instead of fighting an external threat, the navy had to fight fellow Romans. In 36 BCE, Agrippa, the admiral in charge of Octavian’s naval force, defeated the last pirate fleet, led by none other than Sextus Pompey, son of Pompey the Great.

In 31 BCE, the famous Battle of Actium took place between the naval forces of Octavian and Mark Antony. Once again, Agrippa won the day, his smaller warships outmaneuvering and immobilizing Antony’s large quinqueremes. Actium also signaled the last major naval battle in the Mediterranean, as the victory led to the downfall of Ptolemaic Egypt and the establishment of the Roman Empire.

The Mediterranean Sea was now a Roman lake, and the Roman navy ruled the waves. Aware of the importance of the warships in policing the “inner sea” and patrolling trade routes, Octavian — now emperor Augustus — established the Roman imperial navy with two major fleet commands: Classis Praetoria Misenensis, at Misenum on the Gulf of Naples; and Classis Praetoria Ravennatis, at Ravenna, in the Northern Adriatic. Both fleets had the task to protect Italy and its lucrative trade routes that brought indispensable goods, such as grain.

Two more naval bases, one in Forum Iulii (present-day Frejus) and one in Alexandria, kept the entire Mediterranean covered by the Roman warships. Augustus’ successors continued to expand the navy, establishing fleet commands on the Atlantic, in the English Channel, on the Black Sea, and on the great Danube, Rhine, and Euphrates rivers. For a brief period, the Red Sea, too, had a separate fleet, instrumental to  Roman trade with the East.

The navy remained subordinate to the army during the imperial period. Fleets provided logistical support to the legions, transported troops, and patrolled the rivers and coasts with the complement of marines. Interestingly, naval personnel did not think of themselves as sailors but as soldiers. This is visible from tombstone inscriptions, in which sailors chose to memorialize themselves as the “legionaries”. While sailors came from the lower class of society, drawn mainly from the seafaring peoples of the Eastern Mediterranean, members of the Roman elites filled the high-ranking posts.

The Roman Navy After Rome

Four centuries after Augustus established the Empire; the Roman navy remained in control of the Mediterranean. During that time, the only threat worth mentioning was the Gothic raids on the coastal towns of Asia Minor in the mid-third century CE. In truth, though, the Roman navy had no real naval competition. The only major naval battle that occurred involved only Roman forces, the fleets of emperors Constantine I and Licinius in 324 CE. A century later, however, the situation had radically changed.

By the end of the fifth century, North Africa was lost to the Vandals, and the Roman West was no more, replaced by the barbarian successor kingdoms. After the short-lived reconquest of the Western Mediterranean under the emperor Justinian in the sixth century, the surviving part of the Empire — also known as the Byzantine Empire — shifted to the East. The Byzantine navy (now based in Constantinople) would play a far greater role in the defense of the state than its earlier iteration. Dromon war galleys and the famed secret weapon — Greek Fire — were critical not only for the defense of the Empire’s far-flung possessions around the Mediterranean basin but also for repelling seaborne attacks against Constantinople itself.

The navy’s fate reflected the fate of the Empire. The rise of the maritime Republics of Venice and Genoa and the weakening of the Empire’s power from the 11th century onwards resulted in the decline of the imperial navy. Then, in 1204, the Fourth Crusade captured and sacked Constantinople, shattering the remnants of the Empire’s naval power. By the mid-14th century, the mighty Roman navy, which once ruled the Meditteranean, was now only a shadow of its former self. Finally, in 1453, Constantinople fell to the Ottoman Turks, who destroyed the last vestiges of the Roman Empire and its navy.