What Are Andrew Wyeth’s 5 Best-Known Paintings? 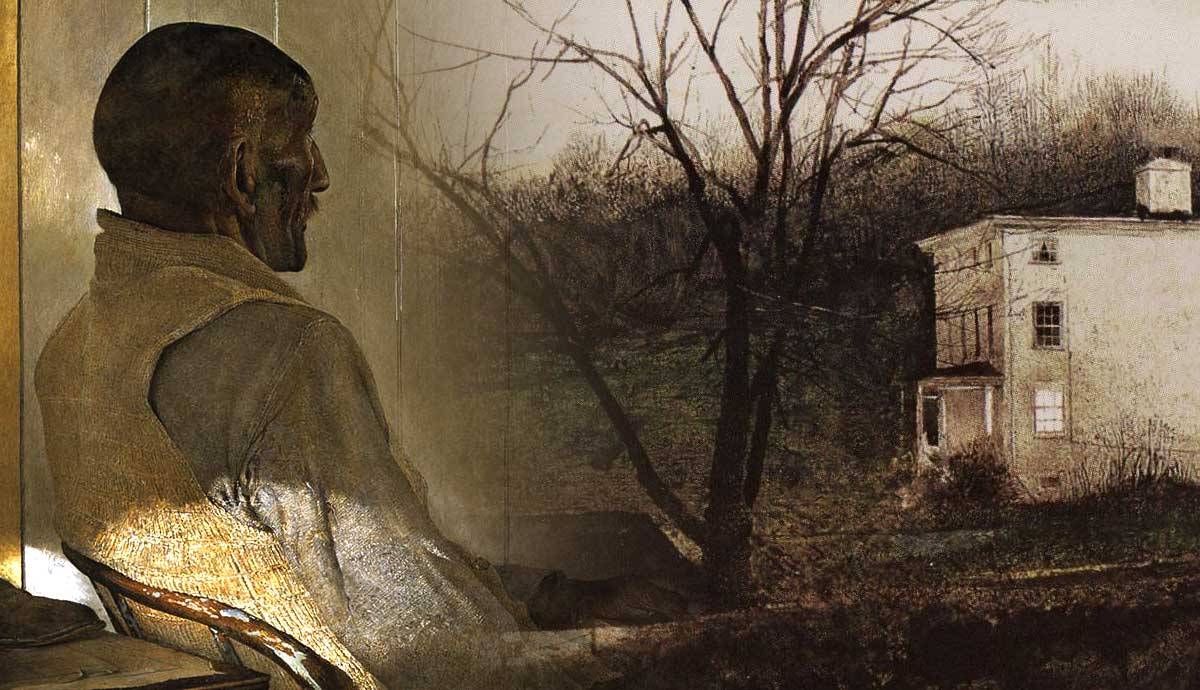 The great American Regionalist painter Andrew Wyeth painted some of the most enduring images of the 20th century. With his trademark meticulous, realist style, and dusty barren color schemes, Wyeth captured the enigmatic beauty of the American wilderness. This was at a pivotal time in American history, when industrialization was threatening its future. His iconic painting Christina’s World might just be one of the most important images of its era. But this artwork is only one in a lifetime’s worth of artworks from this fascinating artist. In fact, his larger body of work tells fascinating stories about the artist, and the places and people that made him who he was. These are some of his best-known paintings.

The melancholic, atmospheric painting Winter, 1946, is one of Wyeth’s best-known works of art. We see a young man bundled in dark winter clothing as he runs down a grassy hill, with a bewildered expression on his face. Wyeth made this painting not long after his father was tragically hit by a train on Kuerner’s Hill in Chadds Ford, Pennsylvania. It is this same hill that features in the background of this painting. Although Wyeth never explained the exact meaning of this painting, critics have suggested the man in the painting is Wyeth himself, as he struggles to come to terms with the trauma of losing his father.

Wyeth’s most celebrated painting is undoubtedly the iconic Christina’s World, 1946. The artist set this painting in the grassy farmlands of Cushing, Maine, where he was living at the time. In the foreground of the painting is the young woman Anna Christina Olsen, Wyeth’s neighbor. Although at first glance Christina might appear to be casually lying down in the grass, she was inflicted with a degenerative muscle condition (possibly polio) that made it impossible to walk. Christina refused to use a wheelchair. Instead she would use her upper torso to pull herself along. Wyeth made the painting as a tribute to the strength of spirit he saw in Christina. He said, “The challenge to me was to do justice to her extraordinary conquest of a life which most people would consider hopeless.”

In this dimly lit, interior scene, Wyeth portrays his neighbor and friend, an African-American man named Tom Clarke. Wyeth said of Tom, “His voice is gentle, his wit is keen, and his wisdom enormous.” He portrays Tom from a side on view, in a moment of quiet, contemplative repose as the daylight dwindles into the encroaching darkness of dusk. The artist explained the title of the work came from Tom, who would often refer to inanimate objects or insects as “that gentleman”. Wyeth first exhibited this artwork at the Dallas Museum of Fine Arts in 1960. The public were so enamored, they set up a collection box with the title “Help Us Buy This Painting.” In 1962, the Dallas Art Museum purchased the work of art for their public collection.

This austere, silent painting shows the view across a graveyard to the Baptist church beyond. The setting here was near the artist’s summer home in Cushing, Maine. Wyeth chose a viewpoint looking across gravestones to the church beyond, emphasizing the church’s role as a gateway into the afterlife. As with many of his paintings, Wyeth contrasts broad areas of simple, almost flat color with minute, photographic attention to detail. We see these details in the individual blades of green grass and the carved accents on the gravestones and the church’s bell tower beyond. The painting’s title “perpetual care” references the church’s role as a resting place for the soul. But it also alludes to the dedicated patience the artist spent rendering such finely rendered details.

Evening at Kuerners is set in the artist’s home town of Chadds Ford, Pennsylvania. Wyeth adored the place, and he lived here most of his adult life. He made countless paintings dedicated to the area’s rugged and un-spoilt farmland, and the many people who inhabited it. As such, he captured a slice of American life in the 20th century that was off the beaten track. Although this painting has somber tones, it also celebrates the quiet beauty of living in harmony with the land, as the buildings blend so seamlessly with the wide open fields around them.

The Troubles of Pollution: Environmental Impact of Industrialization