What Are Takashi Murakami’s Most Famous Artworks? 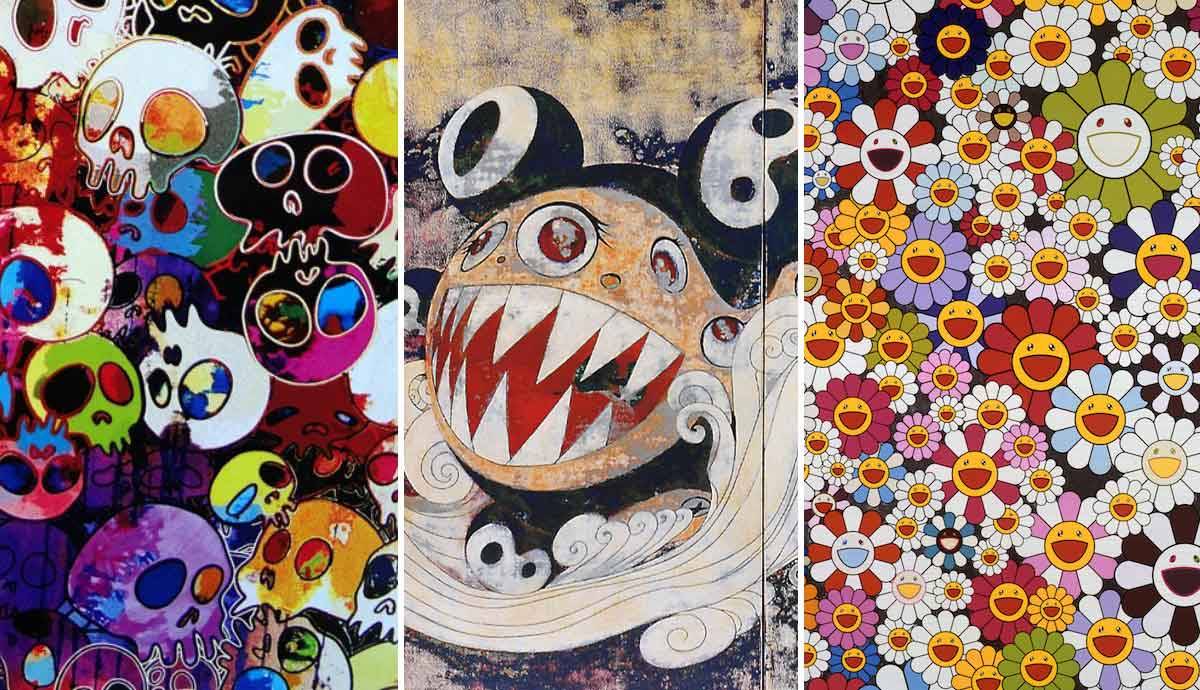 Japanese Neo-Pop artist Takashi Murakami is a superstar in the contemporary art world. He has achieved worldwide fame for his brilliantly bold brand of Neo-Pop, ‘Superflat’ art, and become the figurehead for the Kaikai Kiki art group. Cheerful flowers, cute characters and multicolored monsters in fantastical scenes populate his technicolor world, celebrating the vivid intensity of Japanese popular culture. Throughout his thirty year long career Murakami has produced a wildly prolific body of art, including paintings, drawings, sculpture, as well as fashion, textiles and home furnishings. He thus breaks down barriers between mediums. We look through a handful of his most celebrated works of art and discover what they can tell us about this multi-talented polymath.

In this triptych artwork, Murakami merges a background resembling a historical Japanese nihonga painting with a Hokusai-like wave, and a cartoonish character in an anime or manga style. In doing so, Murakami makes his art a reflection on the long history of Japanese art. The central character in this artwork is Murakami’s avatar, a character named Mr DOB. He paints the character with a gaping mouth, sharp teeth, and a series of large, cartoon eyes. Murakami derived the name of his alter-ego from the slang Japanese phrase ‘dobozite’, meaning ‘why?’ He often paints this character with a maniacal grin, as if mocking the seriousness of the contemporary art world.

Meanwhile this character’s ambiguous name adds to the artist’s desire to question the nature of art and its relationship to the real world. Along with this artwork, Murakami has featured his character as a brand like Mickey Mouse or Hello Kitty on a range of artworks and merchandise. The title of the artwork – 727 – nods towards the Boeing American airplanes that he saw flying over his home in Japan as a child. In naming his artwork after them, Murakami acknowledges the continuing presence of the U.S. in post-war Japan.

Murakami merges cute with creepy in this psychedelic painting of an oversized, multicolored giant mushroom. While it appears like a scene from a cartoon or animation, closer inspection reveals the painting is filled with strange details. These include multiple roving eyeballs, a series of razor-sharp spikes that protrude from is underside, and further, miniature mushrooms in surreal shapes and electric bright colors scattered all around it.

Murakami references the song Champagne Supernova by the British band Oasis in the title of his artwork, which was filled with subtle allusions to drug culture. In doing so, Murakami invites us to consider his mushrooms as hallucinogenic varieties. However, the mushroom also has deeper connotations in Japan due to the mushroom-like cloud left behind by the nuclear bomb the US dropped on Hiroshima in 1945. Therefore, Murakami seems to draw parallels with his strange, mutant-like creatures to the horrors the attack left behind.

Abundant flowers are one of Takashi Murakami’s most iconic emblems. He has developed a distinctive brand of flowers with smiley faces and multi-colored petals, and created a huge range of paraphernalia featuring these cheeky, cheerful characters, from fashion merchandise to wallpapers and works of art. In this offset print Murakami plays with flowers as a multiple, repeat print, decorating the entire surface in various different color variations.

Murakami says the inspiration for his flowers came from his early training in the Nihonga tradition, in which he learned how to paint stylized individual flowers in a traditional manner. However, as with much of his art, there is also a darker strand to Murakami’s flowers. He says their smiling faces reflect the repressed collective emotions held by Japanese locals whose lives were affected by the extreme violence of the Hiroshima and Nagasaki bombings of 1945.

In this offset print Murakami experiments with more overtly sinister imagery, scattering skulls across the entire scene in a clustered clump. Like many of his artworks, Murakami makes a nod towards the death and destruction of World War II, and the long-lasting impact it has had on Japanese society and culture.

However, Murakami also combines this dark imagery with intensely vivid, psychedelic streaks of color. This thereby undercuts the image’s uneasy edge and gives it a gimmicky quality. The title of the work makes a nod towards the 20th century American Color Field painter Barnett Newman, who titled a suite of four artworks Who’s Afraid of Red, Yellow and Blue, 1966-1970. While Murakami thereby points towards Western art traditions as a key influence in his art, he also playfully undercuts the seriousness of Newman’s title, adding the word ‘death’ to the end.

Chakras Open and I Drown Under the Waterfall of Life, 2017

Murakami’s colossal foam sculpture Chakras Open and I Drown Under the Waterfall of Life, 2017, was made in response to the 2011 tsunami near Fukushima in Japan. Nearly 17 feet tall, the sculpture resembles a giant octopus or sea beast and has a skull head and a body covered in angry graffiti. It thus becomes a terrifying symbol of death and the overwhelming power of the ocean.

Sea creatures are a recurring theme throughout Japanese art, symbolizing the unknown forces at work beneath the surface of life, but Murakami ramps up the reference in this colossal artwork, creating a giant mutant to suit the terrifying and visually overwhelming nature of modern society.

Who Is Chiho Aoshima?