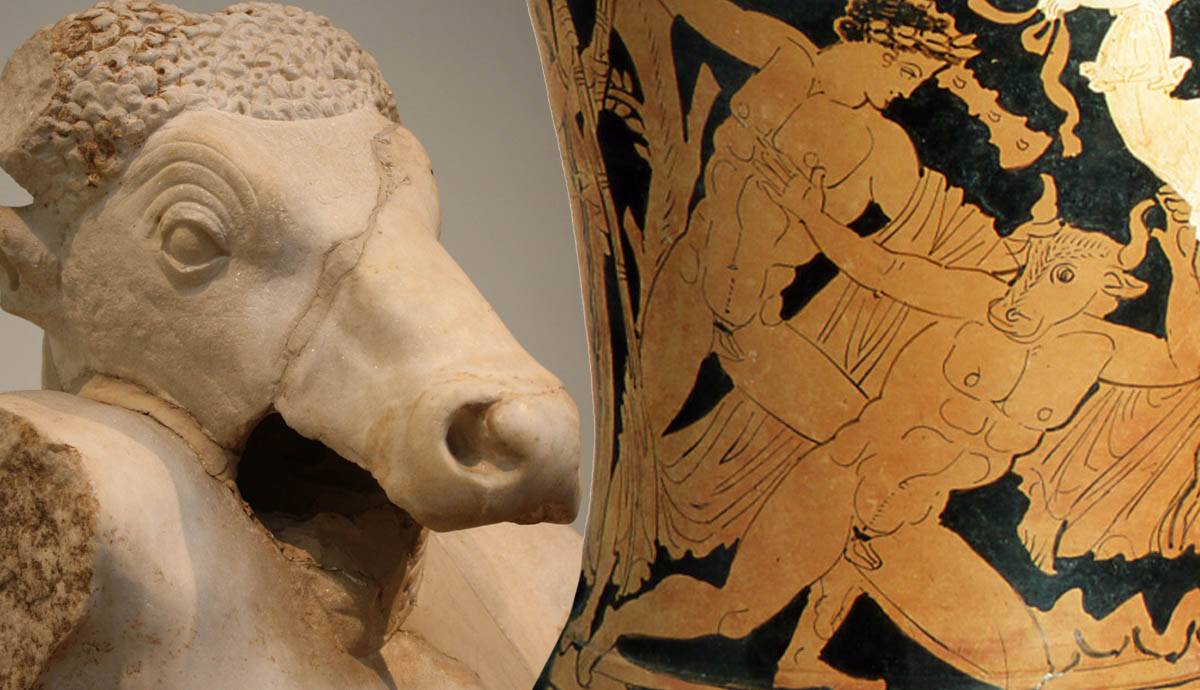 The Minotaur is one of Greek mythology’s most fearsome characters, a terrifying beast with the head of a bull and the body of a man. When Queen Pasiphae, the wife of King Minos, fell in love with a snow-white bull, the pair bore a hideous child together that was half-man, half-bull. King Minos hid the dangerous monster away in a complex Labyrinth designed by the ingenious inventor Daedalus and his protégé son Icarus. The Minotaur remained here, living on regular deliveries of human flesh, until Theseus eventually slayed him. Let’s dive into some of the Minotaur’s stories to learn more.

Like many creatures from Greek myth, the Minotaur came into being under extraordinary circumstances. One day, King Minos of Crete was showing off to his family that he could ask for the gods to grant his any wish. To prove the point, Minos asked Poseidon to summon up a majestic bull, which he would then sacrifice in return. Poseidon granted Minos his wish, making a striking white bull emerge from the sea. But Minos was so taken with the creature that he couldn’t kill it. Instead, Minos sacrificed a different bull, hoping Poseidon wouldn’t notice. But when Poseidon found out, he was so angered, he arranged for Minos’s wide Pasiphae to fall in love with the bull and conceive a monstrous half-man, half-bull child with it.

The Minotaur Took His Name From King Minos

Because the lives of the Minotaur and King Minos were intertwined, the Minotaur’s name was partially derived from Minos, along with the word ‘taur’ meaning ‘bull.’ But the first, birth name given to the Minotaur from his mother Pasiphae was in fact Asterion, meaning ‘starry one’, a reference from the ancient Greeks to the bull constellation named Taurus.

Minos Hid the Monster Away in a Labyrinth

When he was a young bull calf, Pasiphae was able to take care of the Minotaur. But as he grew larger and stronger, he became increasingly violent. Unable to find a reliable food source, the beast began eating people. Something had to be done. So, Minos ordered his most valued inventor Daedalus and his son Icarus to conceive of a vast Labyrinth. Here the Minotaur could be hidden, with no hope of finding his way out. While lying in the maze, the Minotaur was fed on young maidens and youths.

Theseus was the son of King Aegeus of Athens. Angered by the brutality needed to keep the Minotaur alive, Theseus made it his life’s mission to slay the hideous beast once and for all. On his journey into Crete, Theseus met Ariadne and Phaedra, the daughters of King Minos. They immediately fell in love with Theseus.

Ariadne couldn’t bear the idea of Theseus being eaten by the Minotaur. So, she begged Daedalus to help Theseus find his way out of the maze. Daedalus told Ariadne to give Theseus a roll of string, to tie one end to the entrance, and carry the rest with him on his way through. Theseus found the Minotaur in the farthest corner of the maze, and slayed him with his fists (or perhaps the sword of Aegeus). He was then able to find his way back out again with the help of the string.

The Minotaur Symbolized the Liberation of Greece from the Minoans

While the story of the Minotaur is clearly a fictional myth, scholars have suggested the killing of the Minotaur might actually represent the liberation of ancient Greece from the once dominant rule of Minoan Crete. This version of events might seem less dangerous and exciting than the Greek myth, but at least it makes a little more sense!

The Myth of Daedalus and Icarus: Fly Between the Extremes