HomeAnswersWho Were the First 6 Olympians?

Who Were the First 6 Olympians? 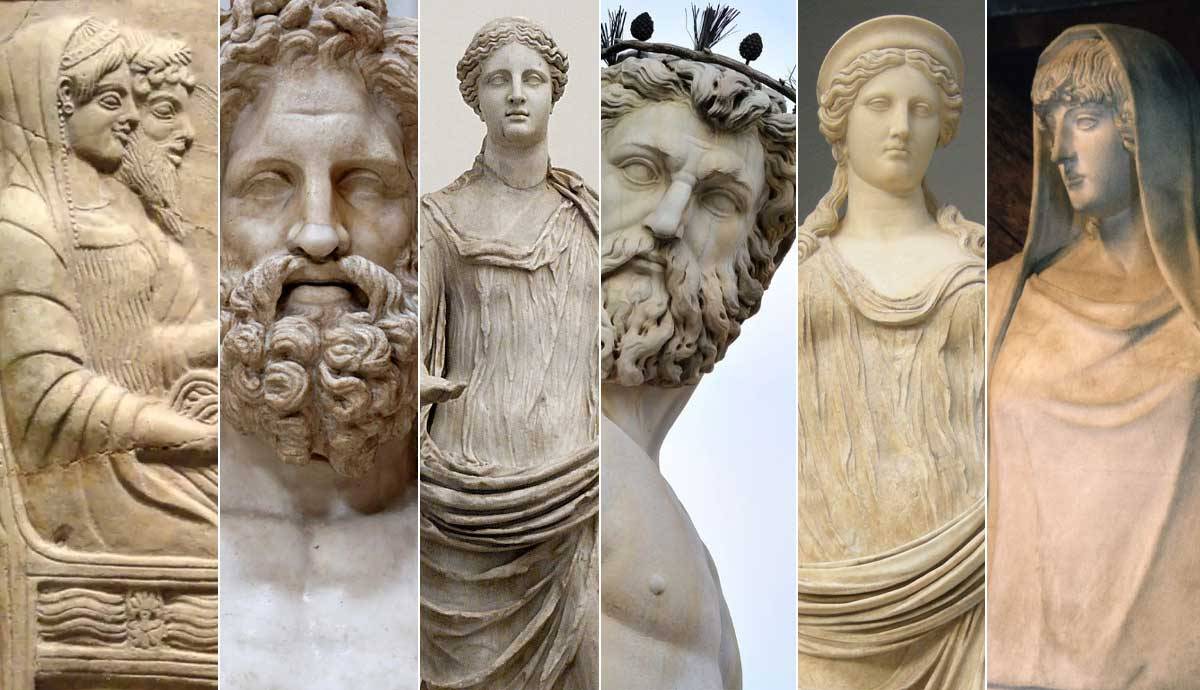 In ancient Greek mythology, the Olympians were a family of all-powerful, immortal deities who resided in the heavenly Mount Olympus in the sky. While the family of Olympians grew over time, it began with a core group of six, who were the children of the Titans Cronus and Rhea. Each of these six Olympian gods had their own special attributes, associations and skills, which they subsequently passed on to their own children and grandchildren through the generations of Greek mythology. But who were the original six Olympians? Here is our handy guide to the original deities who founded the ancient world.

1. Zeus: King of the Olympians

Zeus was the most powerful of all the Olympians, after overthrowing his tyrannical father Cronus. Once he assumed the leadership role, Zeus became the king of all gods, god of the sky and thunder, and ruler of the entire universe. He is often seen wielding lightning bolts, which he would use to strike anyone who dared to defy him. Throughout Greek mythology, Zeus was an incorrigible womanizer, and he fathered hundreds of children with both mortal and immortal women of the course of history. Although he was ruler to the gods, Zeus delegated responsibility for the universe to his brothers and sisters.

2. Hera: Queen of the Olympians

Zeus’ sister Hera also became his wife, and thus the queen of Mount Olympus. As one of the original Olympians, Hera was the goddess of marriage, fidelity, the sky and stars. In this role she blessed weddings and protected women during childbirth. Equally wise, cunning and cruel, she suffered terrible bouts of jealousy and rage over Zeus’ countless extra-marital affairs. As a result, she would often enact cruel punishments on both Zeus’s lovers and the resulting children. Hera had a series of sacred animals, including the cuckoo, the peacock, and the cow.

God of the sea, Poseidon was an inimitable force of nature. He rode a four-horse chariot and carried a large trident which he would use to stir up formidable storms, tidal waves and earthquakes if anyone dared to anger him. He was so short tempered that this happened all the time, and he got himself embroiled in all sorts of disputes against other Olympians, gods, and mortals alike. Often portrayed in art with dense curly hair, a long beard and blazing eyes, Poseidon is one of the more famous gods of Mount Olympus.

Hestia was goddess of the hearth, or the fireplace, in the center of the family home. It was her role to stay at home and keep guard of the fireplace at Mount Olympus, so compared with her fellow Olympians she appears in relatively few myths. Benevolent, benign, and peaceful, she is one of the quieter deities of Mount Olympus. Nonetheless, her role was equally as important as her siblings. Ancient Greeks saw making and preserving a fire as essential for survival, and the fire also represented security, stability and permanence.

One of the more terrifying Olympians, Hades was god of the Greek underworld. It was his role to collect and keep the souls of the dead. Hades rarely left the underworld, so his name became synonymous with the dark, menacing world where he resided. His favorite pet was Cerberus, the ghastly three-headed dog who guarded the entrance to the underworld. In one of his most famous myths, Hades abducted the beautiful young Persephone and made her his queen. But Persephone’s mother Demeter (see below) was so angry, she demanded her return. Finally, they reached an agreement – Persephone spent six months of the year with Hades, and the remaining six above ground with her mother.

Demeter was the goddess of agriculture, harvest and grain. One of the most important Olympians, she was a maternal goddess with close links to the earth, and was responsible for creating, growing, and harvesting cereal grains, which were essential to survival in ancient Greece. This meant her existence was fundamental to keeping the people of ancient Greece alive. When Hades kidnapped her beautiful and beloved daughter Persephone and made her his wife, Demeter searched high and low before eventually finding her.