Why Did Francisco Goya Make His Black Paintings? 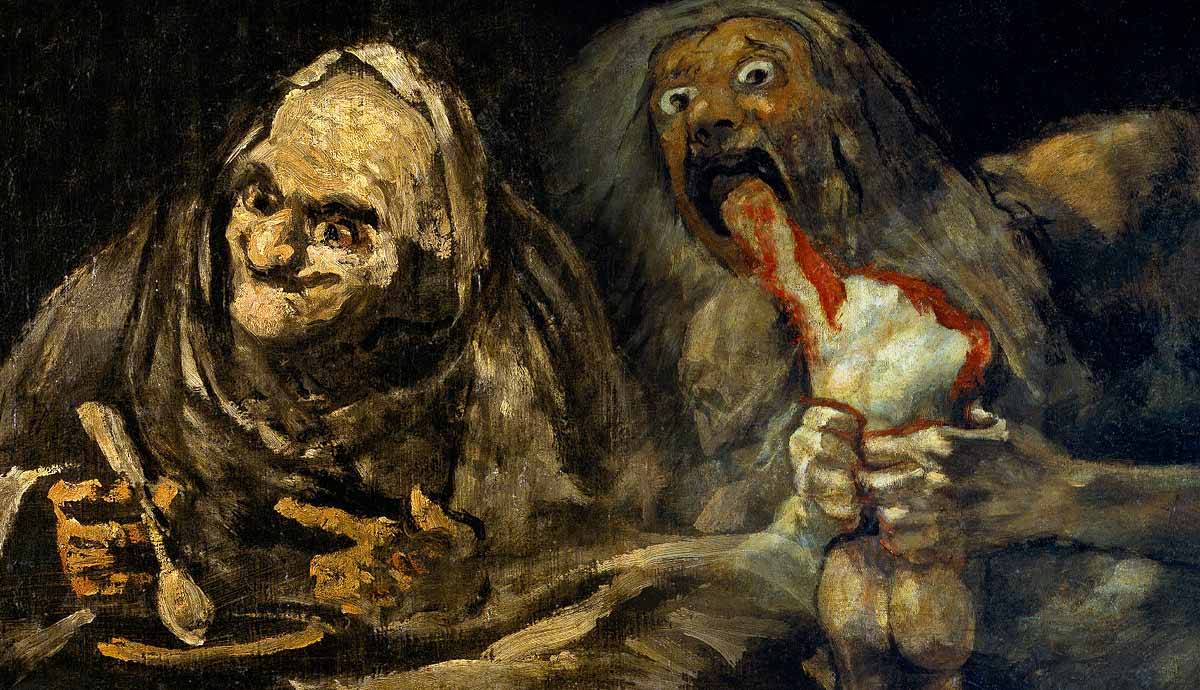 Spanish painter Francisco Goya was a complex and mysterious artist who defies easy categorization. Part Romanticist, part Surrealist and part madman, his turbulent and expressive paintings spanned the entire 19th century, forming a bridge between the old masters and the great modernists. Of all the artworks he made throughout a brilliantly diverse career, Goya’s so-called ‘Black Paintings’ are among the most intriguing, terrifying, and misunderstood.

Originally made onto the walls of the artist’s own home near Madrid between 1819 and 1823, this series of 14 dark, fatalistic paintings are filled with terrible stories of witches, demons and man-eating monsters. The entire suite of paintings have been on display at Spain’s Prado Museum for years. Over the centuries since, many have questioned what possessed Goya to make these artworks. Were they the work of a deranged madman? Or an aggressive form of political satire? Let’s take a look through some of the most popular theories.

Some historians believe Goya’s Black Paintings were a reflection of his increasingly troubled state of mind. By now Goya had been profoundly deaf for several decades, was in his 70s, and he was living alone in an isolated farmhouse in Madrid, known as the Quinta del Sordo (House of the Deaf One). Much speculation has been made about the cause of Goya’s deafness, and whether it might have been a symptom of a larger disease, such as the eastern plague, viral encephalitis, lead poisoning, or a stroke.

Did this mysterious unknown illness affect the artist’s state of mind, leading him to create the Black Paintings? We will never know for sure, but Goya died just a few years after completing these artworks. To add to the mystery, Goya never revealed the paintings to anyone during his lifetime. He moved away from the Quinta del Sordo to France for the final years of his life, leaving his secret house of horrors to be uncovered after his death.

2. Goya Was Making a Political Commentary

Many art historians have disputed the notion that Goya was suffering a delusional state of mind, arguing instead that his Black Paintings were a deeply emotive form of social commentary, reflecting the turbulent times that Goya had lived through. Earlier in his career Goya made paintings that reflected his growing unease with the changing face of Spanish politics during the Peninsular War between Napoleon and Bourbon Spain.

One of these – The Third of May 1808, was so shocking that authorities hid it away in storage for over 40 years. Were Goya’s Black Paintings an extension of his distaste for authoritarian politics led by King Ferdinand VII? It seems likely, given the famine, brutality and poverty that Goya had experienced in his lifetime, that this was at least part of the driving force behind his Black Paintings. One clue that leads towards this hypothesis is the presence of 20 different political figures, including Napoleon, hidden within the suite of paintings.

3. A Satirical Reflection on Life

Although many of the Black Paintings are hard to look at, there does also seem to be a thread of dark humor running through many of them. In an interview with The Guardian in 2019, Prado’s in-house Goya specialist Manuela Mena argued that Goya made the paintings as a form of social satire. She said, “he was actually an optimist with a great sense of humor, very rational and very clear in his mind, right to the end of his life.” So, the goblins, witches, and demons that populate these paintings might just be mockeries and caricatures of the worst aspects Goya saw in humanity.

4. A Private Form of Self-Expression

Goya was undoubtedly an expressionistic painter, whose raw, emotive language went on to influence the giants of modern art including Salvador Dali and Pablo Picasso. In many ways we can read Goya’s Black Paintings as a private form of self-expression, almost like a visual diary, made when no one else was looking. Goya never named the paintings himself, perhaps because he didn’t want the outside world to see them. Art historians later titled them the ‘Black Paintings’ due to their predominance of somber black and brown tones, which suggest a murky underworld with no daylight.

5. They Were a Product of Their Time

Finally, some historians, such as Goya’s biographer Janis A. Tomlinson, argue Goya’s taste for the grim and gory was in line with the time in which he was living. Although we might find such subject matter difficult to digest today, Tomlinson argues that Goya was, at least in part, painting the same kind of subject matter as other like minded Spanish artists of the 19th century, who all seemed to share a fascination with grim folklore, mythology, and darkly satirical stories.