HomeStories7 Reasons Why Constantinople Was So Important

7 Reasons Why Constantinople Was So Important

In the mind of Medieval individuals, for more than a thousand years, Constantinople held the title of one of the most important cities in the world. Here’s why. 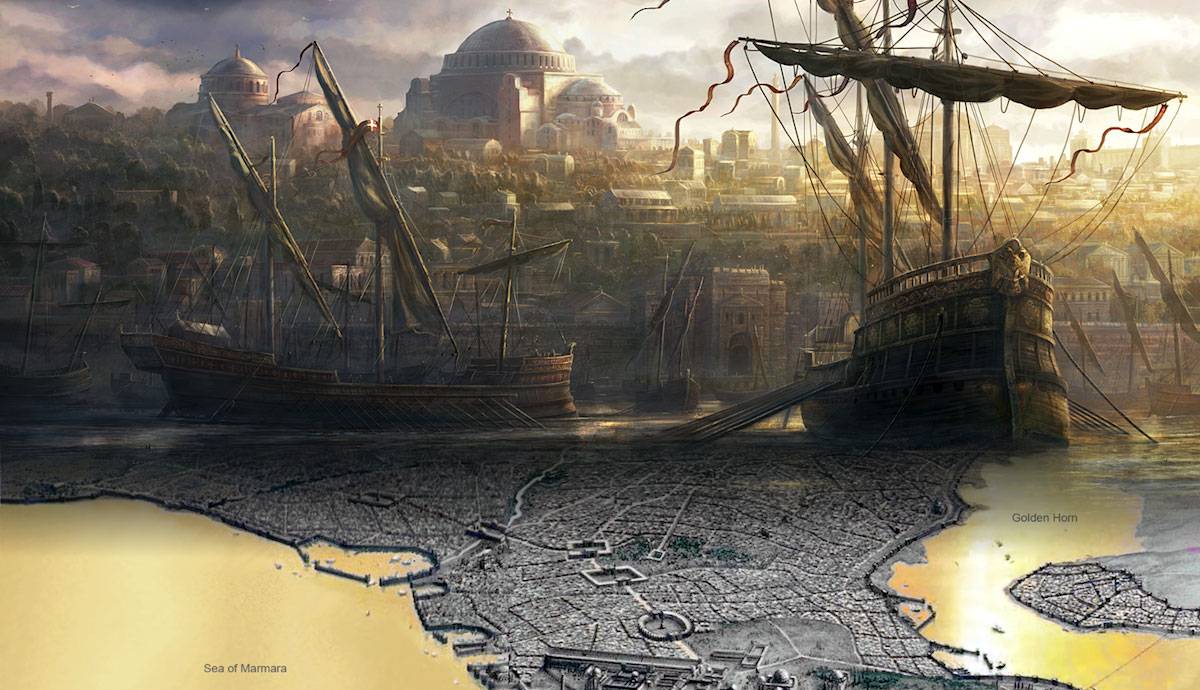 Constantinople, the contemporary city of Istanbul in Turkey, was the capital city of the Roman Empire for more than a thousand years. Rising from an ancient Greek colony established in the 7th century BCE, it came to be one of the most important cities of the Middle Ages. In 324, Emperor Constantine officially moved the capital of the Empire from Rome to the city of Byzantium and named it Constantinople, after himself. This event sparked more than a millennium of history infused with Greek culture, Roman state organization, and Christianity. Until the 29th of May 1453, Constantinople, along with its politics and religion shaped the life of the Middle Ages in the region.

On the crossroads of ancient commercial and military roads, Constantinople was chosen as the capital of the Roman Empire. The main reasons for this choice were based on the political and military situation that called for a strong center in the eastern part of the Empire. The small city of Byzantium, between two continents and two seas, connected to both the Black Sea and the Aegean and Europe and Asia, was the obvious choice.

The position of Constantinople, with its surroundings and natural harbors, secured an uninterrupted supply of wheat and other necessities of a big city. An important geographical factor is the Sea of Marmara and the Golden Horn Bay, which surrounded two-thirds of the city and made its defense easier. The city was defended from the European side by a 45 km-long wall structure, the Theodosian Walls, named after emperor Theodosius II.

From its earliest period, Constantinople had a great influx of citizens. Based on the writings of John Chrysostom, around the year 400, the city had around 100,000 Christians (and even more citizens). Historians assume that the city numbered around 400,000 citizens before the Great Justinian plague of 542.

Since its foundation, the capital was considered a unique urban environment, a City par excellence, compared to other settlements. Even during the Late Byzantine period, the myth of the Imperial city, the political and religious center of Orthodox Christianity, compensated for the reality of the declining empire.

2. Constantinople as the New Rome

More than any other of its physical characteristics, the city’s identity was laid on its multidimensional symbolism. Constantine shook the world of Late Antiquity by moving its center from the Italian Peninsula to the east, from the Old to the New Rome.

The Byzantines used the term Rome, New Rome, or Second Rome for their capital, and the inhabitants of the Byzantine Empire were Romaioi, and the Empire was Romania. The name “Byzantine” is an expression coined later in history. Their emperors were the direct successors of Roman emperors. This connection to Rome represents a particular source from which the conception of the absolute power of Byzantine emperors and their claims on the world beyond the borders of their empire was derived.

The idea of the imperial city inherited from Old Rome and its concept of an eternal city had to be integrated into the Christian doctrine, in which the city would last until the End of the World and the Last Judgment.

3. Constantinople as the Christian Capital

On 11th May 330, Constantinople was consecrated and became the first Christian capital in the world. The importance of its consecration is proven by the yearly celebrations of this day in Byzantium. The idea of Constantinople as a universal Christian capital, equal to a New Jerusalem, was complex and fundamental to Byzantine political ideology. The Byzantine emperor was frequently referred to as the “Lord’s Anointed” and compared to figures such as Moses, Elijah, and David. Like these biblical figures, the Byzantine emperor was the leader of God’s chosen people, in this case, meaning all Christians. This meant that the ideology of the new capital needed to be infused with Old Testament biblical influences.

The monumental example of this idea remains intact in the lunette above the portal of the south vestibule in Hagia Sophia. A symmetrical composition focuses on the Virgin Mary enthroned holding the Christ-child. Emperor Constantine flanks her on one side and Emperor Justinian on the other. Emperors are offering models of the city and the church to them. Their vows and dedication to the Virgin identify the city and its main church as two earthly elements of the heavenly city, or the Heavenly Jerusalem.

4. The Cult of the Virgin Mary

The Virgin Mary, known as the Theotokos (Mother of God) in Greek, was central to Byzantine religious identity. To Byzantines, Theotokos was the mediator between suffering humankind and Christ as well as the protectress of Constantinople. The importance she held is seen by an uncountable number of her representations in art, sacred places, and liturgical hymns dedicated to her.

Аfter the 3rd Ecumenical Council in Ephesus in 431, Mary was affirmed as Theotokos. During the reign of Theodosius II, the gathering in the city of her relics and icons as material confirmations of her presence began. The emperor’s wife, Aelia Eudocia, discovered an icon of Theotokos in Jerusalem and brought it over to Constantinople. The image of her holding the Christ-child was believed to be an authentic portrait of the Theotokos done by none other than Saint Luke the Apostle. In the consciousness of Byzantines, this was a proto-icon, whose authorship and confirmation of the Incarnation of Logos made it equal to the words of the Gospels.

Identified as Theotokos Hodegetria (Our Lady of the Way), through imperial ceremonies and symbolism, it rose to the rank of the imperial palladium. Thus, Byzantines believed in the idea of their capital as the chosen residence of Theotokos as her earthly dwelling. The city was dedicated and identified with her. From this sprang the idea of the Virgin’s wish to be with her people in her city, reaffirming the chosenness of the Byzantines. Especially in the times of great sieges, the Virgin Mary was the bastion of the capital.

5. The Churches of Constantinople

An important aspect of Constantinople as a Christian capital was the number of religious buildings built in the city and its surroundings. Nearly all of these churches and monasteries don’t exist anymore, but according to some estimations, Constantinople had around 1,000 churches throughout its eleven-century-long history. These churches housed around 3,600 relics belonging to 476 different saints.

According to Byzantine tradition, Constantinople was the Holy City, where the second coming of Christ was awaited. Described by pilgrims and travelers as a spatial icon, the city’s sacredness transcended its historical, architectural, and urbanistic realities.

In the eyes of a Medieval man, a church was more than a building decorated with marble and gold. It was a space where the influence of holy relics and icons could be experienced. The power of these relics and icons was spread out throughout the city by processions in which they were carried. From the moment it was founded, Constantinople started “collecting” Christian relics. By the 12th century, Constantinople was considered even in the West as a city reliquary (a container or shrine in which sacred relics are kept).

6. The Ruler of Constantinople

We have already mentioned the importance of Byzantine political ideology for the idea of Constantinople as a universal Christian capital. In the center of that ideology stood the ruler of Constantinople and the entirety of the Christian world. Despite historical circumstances, the idea of emperorship was firmly believed in by the Byzantines. As was the case with the pagan Roman Empire, the imperial authority conserved its divine character in the Christianized empire.

A Byzantine emperor is the Chosen of God; he is called to rule by Divine Providence and fulfills the Divine Will as a sovereign of the empire protected by God. The emperor was considered the leader of all the world and the protector of the Christian faith. He was the only legitimate emperor on earth, not only chosen by God, but also the successor of the Roman emperors dating back to Augustus.

This idea dominated the life of Constantinople and emanated from monuments, art, seals, coins, speeches, written documents, and the ceremonies of the court. Surprisingly the supremacy of the Byzantine emperor was recognized even by independent Medieval countries. Many non-Byzantine nobles and monarchs held Byzantine court titles that they obtained from Constantinople. Thus, Medieval countries were a part of the hierarchy of states, on whose summit stood the Byzantine autocrat as the head of Christendom.

7. The Apocalypse Is Coming

Apocalyptic literature had a very rich and popular intellectual tradition in the history of the Byzantine Empire. In the minds of Byzantines, the end of the Empire was associated with the end of the world. By the 15th century, the Empire was left with only a small area around Constantinople, further magnifying the apocalyptic role attributed to the city throughout history.

According to the Byzantine and generally European apocalyptic tradition, the return of Constantinople under Christianity was also prophesized. The Last Roman Emperor would “tame” the Blond Peoples (associated with Nordic peoples) and eventually defeat the “Ishmaelites” and take the capital back with their help.