HomeAncient HistoryYersinia Pestis: When Did the Black Death Really Begin?

Yersinia Pestis: When Did the Black Death Really Begin?

Bacteria infected rats, rats infected fleas, fleas infected humans. The Black Death, depopulating Europe from the 14th to 17th centuries, began when the bacteria began. It was not in 1347. 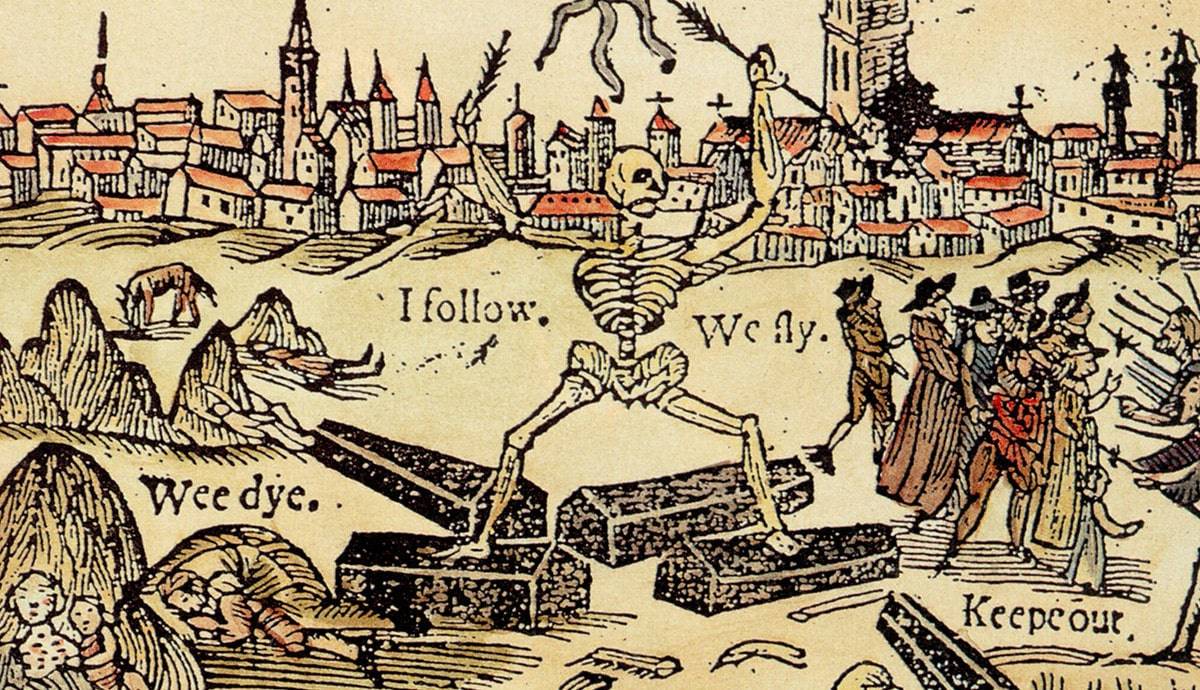 The mental image of the beginning of the Black Death in Europe is of rats fleeing a ship full of corpses and heading into the city in 1347. But live rats were not the problem. The problem lay with the dead rats. Voracious, starving fleas fled dead rats just like the live rats fled the dead ship. A gene enabled the bacteria’s survival in the flea’s foregut as it blocked digestion. Frantic to eat, the flea bit, swallowed, then threw it all up, accompanied by bits of bacteria. The gene ymt was crucial to initiating bubonic plague. Now DNA analysis is pinpointing the time when the ymt gene first turned a relatively benign bacterium of Yersinia pestis into humanity’s deadliest microbe.

In 1800 BCE, a man and his companion were laid in a grave framed in wood. Positioned carefully in a semi-fetal position, they faced each other. In a time and place dominated by nomadic steppe people, the two grave inhabitants, labeled by archeologists as RT5 and RT6, came from a more sedentary culture, the Srubnaya. They inhabited a wide area between the Dnieper River and the Urals Mountains, about 2000 km (1250 miles), and lived in houses partly dug into the ground, constructed of wood with a steeply sloping thatched roof. Like their purely nomadic ancestors, the Catacomb Culture and before them the Yamnaya People, the two grave occupants mostly ate dairy and meat from their herds and gathered wild plants and seeds.

They raised cattle and horses, taking them to distant pastures to graze. Unlike their ancestors, when Srubnaya people died, they were laid in timber-lined pits. They probably spoke an Indo-European language, the ancestor of such diverse languages as English, Bengali, Russian, Spanish and Persian.

During their 400 year occupation of the area, from 1900-1200 BCE, the Srubnaya people may have participated in a religious initiation ceremony that consisted of sacrificing dogs. Based on the number, condition, and age of the remains of 64 canines found at a site, and a reliance on Indo-European myths, it is considered possible that older, well-cared for pets were sacrificed as part of male initiation rites.

If true, dogs were another possible route for disease. Today dogs can be infected with Yersinia pestis, probably by catching a diseased rodent, and they can contaminate their owners. This is relevant because RT5 and RT6 died of Yersinia pestis, and not just any variety; the Y. pestis, which in all probability killed them, had the ymt gene. That gene was the last piece of the puzzle that fully activated the bacteria that initiated the Black Death.

Before the discovery of the Bronze Age remains of RT5 in Samaria, Russia, the earliest known date for a Yersinia pestis was 950 BCE in the Iron Age. But the RT5 find did more than just add 1,000 years to the existence of Y. pestis. It also resulted in a much more detailed phylogenetic tree, a construction similar to a family tree but for genes. RT5 was closely related to the common ancestor that led to both the Justinian Plague and the Black Death strains, but the RT5 strain came after the common ancestor of a strain in China that was fully virulent and responsible for human bubonic plague. That meant that 1800 BCE bacteria was not as old as it gets. Molecular clocks and phylogenetic analysis found that Y. pestis probably has been fully capable of causing bubonic plague since at least 3000 BCE.

The discovery of RT5 also meant that Y. pestis had lost its alibi as a suspect in several historical plagues with unknown sources: the Hittite plague, a possible Egyptian plague, and several Biblical references to plague.

There were three types of plague produced by Y. pestis, all prevalent during the Black Death: bubonic, septicemic, and pneumonic. Bubonic plague replicated in the lymphatic system, creating the characteristic black buboes ballooning from the lymph nodes. Septicemic plague infected the bloodstream. Pneumonic plague infected the lungs, was transmitted by air droplets, and was 100% fatal. Inevitably, the impossibly high fatality rate made it less common. The bubonic and septicemic versions were 30-60% fatal. In order to catch the bubonic and septicemic versions, the bacteria needed to enter the bloodstream or the lymphatic system, which happened by a flea bite, and for the flea to bite, it needed the ymt gene.

The Other Yersinia Pestis

In the meantime, other Yersinia pestis varieties proliferated. These bacteria had the components to make human beings sick and may have even killed them, but many details are still unknown. Fortunately, research is relentless.

Many genomes are publicly available online. By doing a search of the genomes from mass graves, the oldest Y. pestis genome to date was found in the teeth of a 20-year-old female Neolithic farmer in Sweden from 4900 BCE. The bacteria, although unquestionably Y. pestis, did not have the crucial ymt gene. Without the gene, the bacteria cannot take up residence in the foregut of the flea, and the microbe explodes. Nevertheless, Y. pestis obviously infected people across the breadth of the Eurasian continent. How it infected people is still unknown, but hypotheses abound.

The bacteria may have been able to inhabit the hindgut of the flea. Certain rodents then and now are a natural reservoir of the bacteria, including rats and marmots. It is possible that the rodents infected themselves when they groomed their fur, ingesting the bacteria from the flea’s feces. If the rodents could be infected by ingestion, then perhaps people could, too. Although the steppe people did not have a literary tradition, the diets of the steppe people had been noted by Ammianus, a Roman historian from the 4th century, and said to include a variety of foods including, occasionally, rats and marmots.

Another footnote said that the nomadic people would not stop to cook the meat but warmed it up between the saddle and the horse. Y. pestis is killed at 40 C (104F), so cooking would have killed the bacteria. Of course, hearsay evidence by a biased historian based on a diet 2,000 years later is not evidence, but it might be a hint. What is clear is that the people were infected in some manner and it could not have been by a flea bite without the ymt gene.

By 1800 BCE, the bacteria was primed for a human plague; but until the climate caused a rodent explosion, the bacteria lived in equilibrium within its rodent host. Infected fleas would bite the rodents, but some rodents acquired immunity and lived. As new rodents were born, many would die of the disease but there were always some that did not. As a result, there was a tentative truce between rodent, flea, and bacteria populations, until the climate changed.

Research shows that warm springs followed by wet summers produce a bumper crop of rodents which correlates with the beginning of bubonic plague pandemics, including the Black Death. As the rodents multiplied, so did the fleas, but since the new larger population was mostly new rodents, the percentage of dead rats killed by the bacteria was much higher than in previous years, leading to far too many hungry fleas without anything on which to feed.

They launched onto any warm-blooded animal. The death ship arrived, docked in a busy harbor; the deck littered with corpses of people; dead rats hidden in the hold. The living rats fled into the city only to die in the walls and floorboards and rafters of warehouses, stores, and houses; places within which the fleas found mice, other rats, dogs, cats, horses, and people. Only when the rats were dead did they become pools of infection. It was a matter of timing.

Timing likewise was crucial for the ymt gene inserting itself into the bacteria. If it had been too early in humanity’s development, the gene might have been less important in its natural pool of rodents. Without heavy population densities of a substitute host, the gene might have diminished in value to the organism. It takes a lot of microbial resources to harness a vector like a flea or a mosquito. It would have to be worth it to the bacteria or else the extra baggage might be lost or inactivated. Sometimes evolution works with a ‘use it or lose it” motto, especially in the small chromosomal spaces of bacteria.

On the other end of history, if the gene had been acquired just a few thousand years later, the microbe would not have found human beings such hospitable hosts. Antibiotics and vaccines would have been waiting for it.

As it turned out, Constantinople and its trade routes, the hubs of Europe in the Middle Ages, and the 19th-century populations that suffered through the Third Pandemic provided just the opportunity for the deadly microbe to proliferate among a group of warm-blooded creatures thickly amassed in cities. The ymt gene, although a late arrival, was just in time to be useful for an exponential explosion of their species when the climate changed.

The timing was not a fluke. The genes proved valuable for the microorganism because chance kept rolling the dice until it hit the jackpot. Bacteria has so many ways of acquiring genes and does it so much faster than humanity that it was inevitable that eventually a microbe would win big and people would lose and lose and lose. During the Black Death, people lost at least 25 million times.

The Plague in Antiquity: Two Ancient Lessons for the Post-COVID World