HomeArtFrom Fine Art to Stage Design: 6 Famous Artists Who Made the Leap

From Fine Art to Stage Design: 6 Famous Artists Who Made the Leap 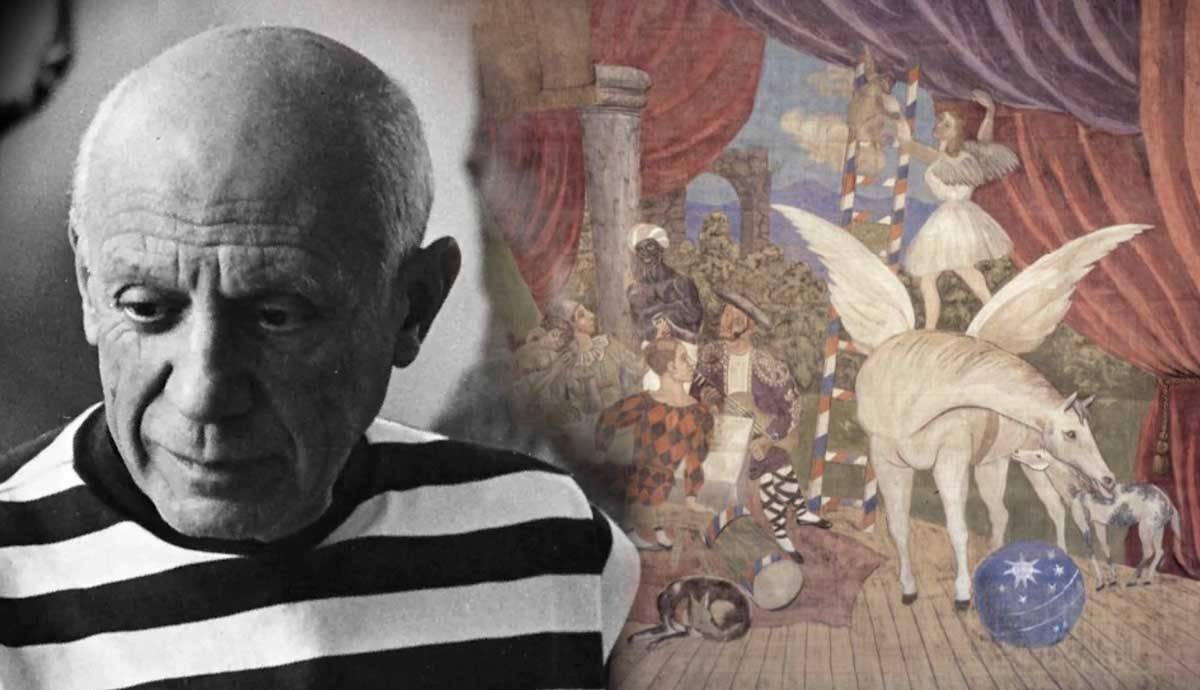 The artists Edvard Munch and Pablo Picasso are commonly associated with their famous paintings, like The Scream and Guernica. At some point in their life, though, they created sets for ballet productions. Many other artists have worked in stage design alongside their careers as artists, to earn more money, or because of their love of the performing arts. Since their work as stage designers does not always get as much attention as their paintings or installations, here are six famous artists who set the scene for plays, operas, and ballets.

1. François Boucher: Master of Rococo as a Stage Designer

The French painter François Boucher was born in 1703 in Paris. It was a time when the Rococo style became increasingly popular. It is characterized by the playful, light nature, and excessive use of ornaments. Boucher’s paintings are famous examples of this style. He often used delicate colors and depicted carefree scenes. The artist was highly productive and claimed that he made over 1000 paintings and 10000 drawings. Boucher was the favorite artist of Madame de Pompadour, the influential mistress of Louis XV. He gave her lessons and created various portraits of her.

François Boucher started to create theater sets early in his career to make money. Through his friend Jean-Nicolas Servandoni, Boucher started doing set design for the opera. He was originally hired to help Servandoni with the landscapes and figures, but when Servandoni left, Boucher was made the chief decorator at the Académie Royale de Musique. He was also involved with Madame de Pompadour’s court theater. A record of a work Boucher exhibited at the Salon of 1742 is the first proof of an original stage design the artist did by himself for the Académie Royale de Musique. The exhibition catalog described it as a design for a landscape […] representing the hamlet of Issé. The painting served as a small template for the larger set of the opera, which revolved around Apollo seducing a shepherdess. Boucher’s painting depicts the design of a village courtyard.

Many of Edvard Munch’s paintings show intense themes like anxiety, death, and love. The Norwegian artist’s mother died when he was only five years old, his sister when he was 14, and his father and brother when he was still young. Munch’s other sister developed mental health problems. These circumstances led Edvard Munch to say: “Illness, insanity, and death were the black angels that kept watch over my cradle and accompanied me all my life.”

His style is characterized by curvy lines resembling Art Nouveau. He did not use them as a form of decoration but to emphasize the psychological aspect of his art. Since Edvard Munch is known for his haunting imagery, it is not surprising that he created the set design for Henrik Ibsen’s play Ghosts.

In 1906, Henrik Ibsen’s play Ghosts was performed at the opening of the Kammerspiele at the Deutsches Theater in Berlin in a production created by Max Reinhardt. Reinhardt collaborated with Edvard Munch who was commissioned to do some sketches for the set. The theater director’s instructions were very specific, and he described the exact atmosphere he wanted Munch to convey. Reinhardt was very satisfied with Munch’s sketches and paintings. He especially praised the color Munch chose for the walls which Reinhardt referred to as the color of diseased gums. The play itself is a critique of conventional morality. It discusses topics like congenital venereal disease and how the ghosts of people can haunt us even after they are dead.

3. Pablo Picasso and the Ballet Parade

Picasso’s life changed with the beginning of the First World War. Friends of his, including Guillaume Apollinaire, and Georges Braque, left to fight in the war or returned to their country of origin. Picasso, however, stayed in France. His friendship with the composer Erik Satie opened up new opportunities for the artist.

He met the poet Jean Cocteau who had the idea for the ballet Parade. He arranged for Satie to do the music and for Picasso to create the stage design and costumes. Picasso was not fond of traveling, but he joined Cocteau on a trip to Rome where they met with the Russian dancer Léonide Massine, who choreographed Parade. During that time, Picasso also met the ballet dancer Olga Khokhlova, who would later become his wife.

The ballet was about a circus sideshow and used modern imagery like skyscrapers and airplanes. Picasso’s work for the piece was rich in contrast. His realistically executed stage curtain differed greatly from his costume designs in the style of Synthetic Cubism. He collaborated with the Ballets Russes on several other occasions. He created designs for several productions: The Three-Cornered Hat in 1919, Pulcinella in 1920, and Cuadro Flamenco in 1921.

4. Salvador Dalí and His Design for The Three-Cornered Hat

Picasso was not the only one who produced designs for the ballet The Three-Cornered Hat. The Spanish Surrealist, Salvador Dalí, created the décor and costumes for the 1949 production of the ballet at the Ziegfeld Theater in New York. The ballet revolves around a miller and his wife. Their happy marriage is disturbed when a provincial governor, who wears a three-cornered hat, comes along, and falls in love with the miller’s wife. The piece has a Spanish setting and includes elements of Spanish dance instead of classical ballet. Spanish Dancing was very popular at the time in the United States and the dancer and choreographer Ana Maria and Salvador Dalí were instructed to emphasize the Spanish quality of the ballet in the 1949 production.

Dalí captured this Spanish quality by creating a typical Spanish landscape with a characteristic white house and floating trees. The oil painting El Sombrero de Tres Picos shows the design of the stage set for the ballet’s second act. Dalí also used elements of this design for the ballet Los sacos del Molinero and the play Don Juan Tenorio. The 18 sketches he did for Don Juan Tenorio, a play that the author José Zorrilla described as a religious-romantic-fantasy drama, are currently held at the Museo Nacional Centro de Arte Reina Sofía in Madrid.

David Hockney is probably best known for his swimming pool paintings, but he also created several magnificent stage sets. Hockney’s body of work includes stage designs for the opera The Rake’s Progress, The Magic Flute, Tristan and Isolde, and Die Frau ohne Schatten. He did not only make designs for the opera, but according to John Rockwell, the artist also blasted opera music while painting.

David Hockney was interested in how working with theatrical space differed from working with a two-dimensional surface. Since the set is part of an open space in which the performers move around, creating the design requires a versatile skill set. The artist noticed how the approach to color was also different. Hockney said that people in the theater were not very bold when it came to using color, because if done wrong the result could look extremely unappealing.

Hockney did not always enjoy the collaborative process that was required when making sets for bigger productions. Since painters often work alone, Hockney was accustomed to creating art by himself. When asked about his thoughts on collaborations after creating designs for the opera, the artist said that he was looking forward to working on his own again.

6. Tracey Emin as a Stage Designer

Tracy Emin, who was considered part of the group YBA (Young British Artists), became well-known in the 90s. Her body of work does not only encompass paintings, but also video art, installation art, and sculpture. Tracy Emin’s installation My Bed made her a finalist for the Turner Prize in 1999. The work consists of the artist’s unmade bed and objects like bottles of vodka, slippers, cigarettes, and used condoms. It was inspired by a time in Emin’s life when she spent four days in bed due to mental health problems. When she got up and saw the condition of her bedroom, she had the idea to exhibit it in a gallery space.

The controversial installation made Tracy Emin a fitting candidate for the position of the set designer for the 2004 production of Jean Cocteau’s play Les Parents Terribles. The play is about a bourgeois family living in one apartment in Paris during the 1930s. The mother is overly possessive of her 22-year-old son, and she is not thrilled once he tells his family that he is in love with a woman. Since the first and third acts of the play take place in the mother’s bedroom which was described as “a living-sleeping-working-having-a nervous breakdown room,” Tracy Emin’s involvement seems ideal. The artist provided the set with clutter, put clothes on the floor, and draped covers in various patterns over the bed. The background was decorated with one of Emin’s blankets saying Without you it hurts (me) living, which seems to emphasize the play’s intense family dynamic.

9 Lesser-Known Paintings By Edvard Munch (Other Than The Scream)

Edvard Munch’s Frieze of Life: A Tale of Femme Fatale and Freedom