From art inspired by nationalism to leading ideas of modern art, here are eight of the most notable 20th century Finnish artists. 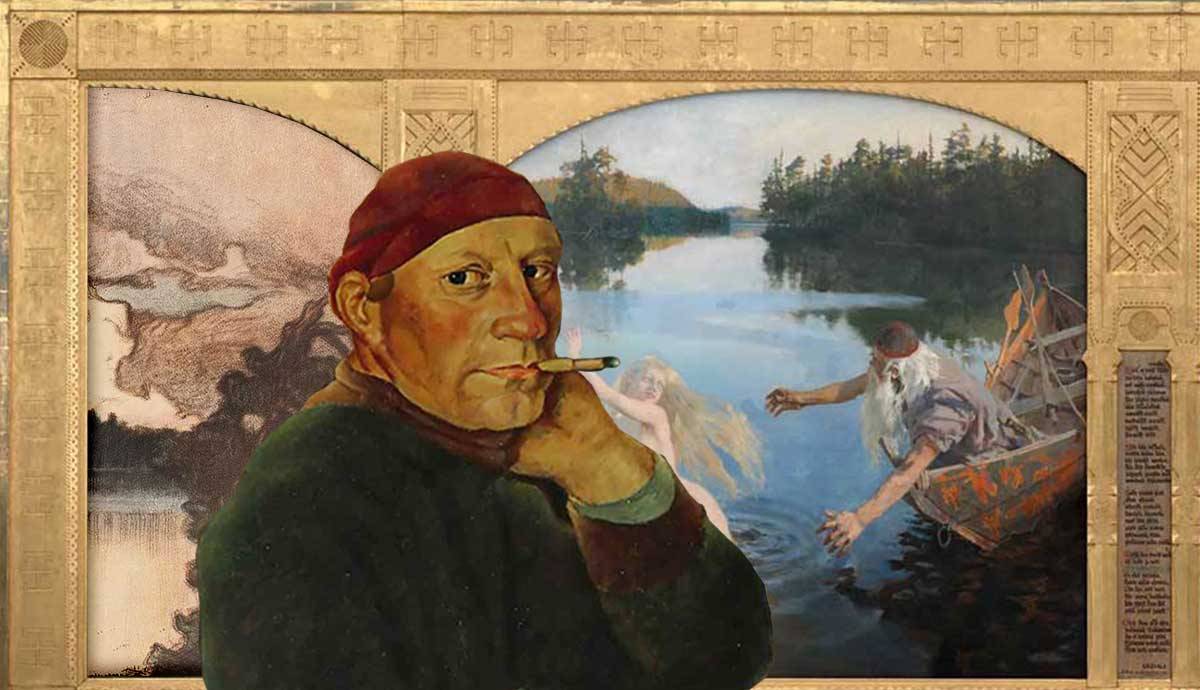 By the end of the 19th century, Finland began experiencing a rise in artistic production, coinciding with the country’s national awakening. Visual art embraced the Finnish form of epic poetry known as Kalevala, Finnish landscapes, and the life of its people as its main inspiration. Besides the rise of art inspired by nationalist ideals, Finnish artists traveled to great centers of European art and participated in the development of new movements and artistic ideas. They worked with some of Europe’s most notable artists but also threaded on their own artistic paths. This article showcases a vast range of Finnish artists, from realists and romantic nationalist painters to artists who dabbled in all of the tendencies of modern art.

Ellen Thesleff was born on October 5th, 1869 in Helsinki to an upper-class Swedish-speaking family. She started her artistic education in 1885, and already achieved recognition in Finland in 1891, at only 22 years of age. At different times, her art has been related to Symbolism, Expressionism, and even Impressionism. In fact, her art escapes all definitions of style. During her long career, she consciously avoided theories and manifests. Roaming through the great art centers of Europe made her an early, international modernist. Inspired by English modernist theater practitioner Gordon Craig, she started working on colored woodcuts, which were a novelty in Finland.

Her interpretation of colors and dissolved shapes, as well as her application of the palette of sunny Italy to the landscapes of her Finnish childhood is what made her unique among Finnish artists. During the last decade of her life, she worked on paintings that came close to being fully abstract. Despite the World War II and her old age, Thesleff remained active throughout the 1940s. In the autumn of 1952, she was hit by a tram in Helsinki and died just over a year later on the 12th of January 1954.

Akseli Gallen-Kallela is a pioneer of the Finnish national-romantic style of art. He also led the fields of handcraft and graphic art in Finland. He was born in 1865 in Pori, as Axel Waldemar Gallen. With Adolf von Becker, he studied French Realism. Furthermore, Gallen-Kallela’s art is stylistically influenced by Finnish artist Albert Edelfelt’s plein air paintings and August Strindberg’s Naturalism, whom he met in Paris. Later in his life, he lectured in Copenhagen and even went across the Atlantic Ocean to study the art of Native Americans. He became known to the public as the illustrator of two key works of Finnish literature, the Kalevala and Seven Brothers (Seitseman veljesta). During the last decade of his life, due to the prevailing wave of modern art, Gallen-Kallela’s works were no longer appreciated. Only after he died in Stockholm in 1931 did Gallen-Kallela come to be admired as the most versatile among 20th-century Finnish artists.

Helen Schjerfbeck, a pioneer among 20th-century Finnish artists, was born in 1862. Schjerfbeck started her studies at the age of eleven. During her career, she taught at the Finnish Art Society’s drawing school in the 1890s, traveled around Europe, exhibited in Paris, London, and St. Ives, and was a prolific art critic. Schjerfbeck’s art in the 1920s and 1930s demonstrates not only her determination to achieve creative renewal but also the effects of changes in lifestyle and aesthetic thinking. Fashion and fashion magazines are an example of a new area of life associated with modernism, and they were objects of interest and sources of inspiration for many artists. Elegant, independent New Women were a novel phenomenon created by modernization and increasingly democratic society. The topic fascinated Helene Schjerfbeck in particular, and most of her works in the 20th century were depictions of modern, professional women.

Although Schjerfbeck liked to portray people, her paintings were not portraits in the conventional sense. She was not interested in the inner life of her models. The paintings were depictions of types or models with no personal features, so most of them cannot be identified. Schjerfbeck even avoided names in the titles of her works, indicating only the profession or status of the model.

Vilho Lampi was a Finnish artist born in Oulu in 1889, but his family moved to rural Liminika when he was 11 years old. The countryside, especially the Liminka River, was an essential element of his art. Lampi studied drawing at the Finnish Art Association from 1921 to 1925. After his studies, Lampi returned to Liminka, where he did farm work and occasionally painted. He had only one exhibition during his lifetime, held at Oulu in 1931, where most of his works at that time were sold. This positive turn of events encouraged him to travel to Paris.

Lampi painted mostly at night and used plywood boards as his canvas. In Liminika, he painted landscapes and the peasant life in which he actively participated. Lampi’s works are filled with portraits of children and self-portraits. These paintings are calm and simplified. Even though his career lasted for only 14 years, Lampi experimented with different styles. A Pointillist technique characterizes his later works. In 1936, Lampi tragically passed away, committing suicide by jumping off a bridge in his birthplace, Oulu.

Sigrid Schauman was born in Chuguyev in 1877. Living to the age of 101, she witnessed many movements and phenomena in art come and go. Concerning social norms, Schauman was one of the most radical Finnish artists. Like many women who pursued art in Finland at the time, she never married. However, Schauman did have a daughter, whose father she refused to marry, and decided to raise her alone. Schauman’s original modernism was inspired by her teacher, Helene Schjerfbeck, who understood her uniqueness as a colorist. Her colorism excluded dark or grey hues, especially in her later years.

Schauman’s concept of art was based on color and an overall mood that emphasized immediate emotion. Alongside her art career, Sigrid Schauman worked as an art critic, publishing nearly 1,500 critiques. As a writer, she evaluated emotional qualities and the formal characteristics of the works. After the age of 72, she spent many years in the south of France and Italy. These years fully clarified her palette, marking a kind of rebirth as an artist and the beginning of a new period of robust creativity.

Eero Järnefelt was born in 1863 to a wealthy family in Vyborg. His mother, being a Baroness, formed an artistic circle around her, including figures like Minna Canth, Juhani Aho, and Jean Sibelius. Järnefelt planned on becoming a schoolteacher, but due to opposition from his father, he began studying fine art. He studied at the Finnish Art Society, but his art matured only when he went to St. Petersburg. His stay in Paris from 1888 to 1891 got him interested in naturalist art.

Järnefelt was also fascinated by the nationalist movement, so by the beginning of the 1890s, nationalist art became the central theme of his work. At the beginning of the 20th century, he moved to Lake Tuusala and was appointed drawing teacher at the University Drawing School. Järnefelt found his ideal Finland in Savonia, depicting its landscapes and people. Some of these paintings, including smaller nature-themed pieces, became the prime examples of Finnish nationalist art.

Elga Sesemann was born in 1922 in Viipuri. She was the boldest colorist and expressionist among the Finnish artists. Elga was interested and influenced by Sigmund Freud’s theory of psychoanalysis, as well as the work of Albert Camus. Another significant influence for Sesemann was music, a constant presence in her childhood.

In a highly personal style, she boldly explored the sentiments of the post-war generation. In her paintings of urban settings, those sentiments merge into melancholy and almost surreal views. The people in the pictures are anonymous, walking silently in the urban landscape. She belonged to the post-war neo-romantic movement. Led by a fusion of pessimism, religion, reality, and fantasy, it gave rise to a visual expression of the general anxieties of the era. In these impressive urban portraits and landscapes tinged with melancholia, existential alienation, and a sense of otherness, Sesemann confronted the trauma of war, distress, and loss.

A sculptor among Finnish artists, Hilda Flodin was born in 1877 in Helsinki and studied under Schjerfbeck at the Finnish Art Society. There, she acquired an interest in sculpture and printmaking. This made her further her studies at the Académie Colarossi in Paris. At the 1900 World Exhibition in Paris, she was introduced to her future mentor, Auguste Rodin. His influences can be seen in her main sculpture from the Paris period, the bust Old Man Thinking. The time in Paris was an unconventional and liberating period in Flodin’s life. She is an early example of the modern “New Woman” in control of her own body and life. The New Woman refused to let others define her lifestyle or sexuality and cherished herself as an individual with freedom of choice. The notion of the New Woman also included the idea of free love, which Flodin practiced in her years in Paris.

Hilda Flodin returned to Finland in 1906, and her connection with Rodin faded. Although Flodin’s career as a sculptor was relatively short, she pioneered the role of Finnish women working in both sculpture and intaglio printmaking. In her later work, she focused mainly on drawing and painting portraits, as well as genre pictures.