HomeAncient HistoryCould Akhenaten’s Monotheism Have Been Due to the Plague in Egypt?

Could Akhenaten’s Monotheism Have Been Due to the Plague in Egypt?

Mounting evidence suggests that the plague may have initiated Akhenaten’s conversion to monotheism when he became pharaoh of Egypt in 1341 BCE. 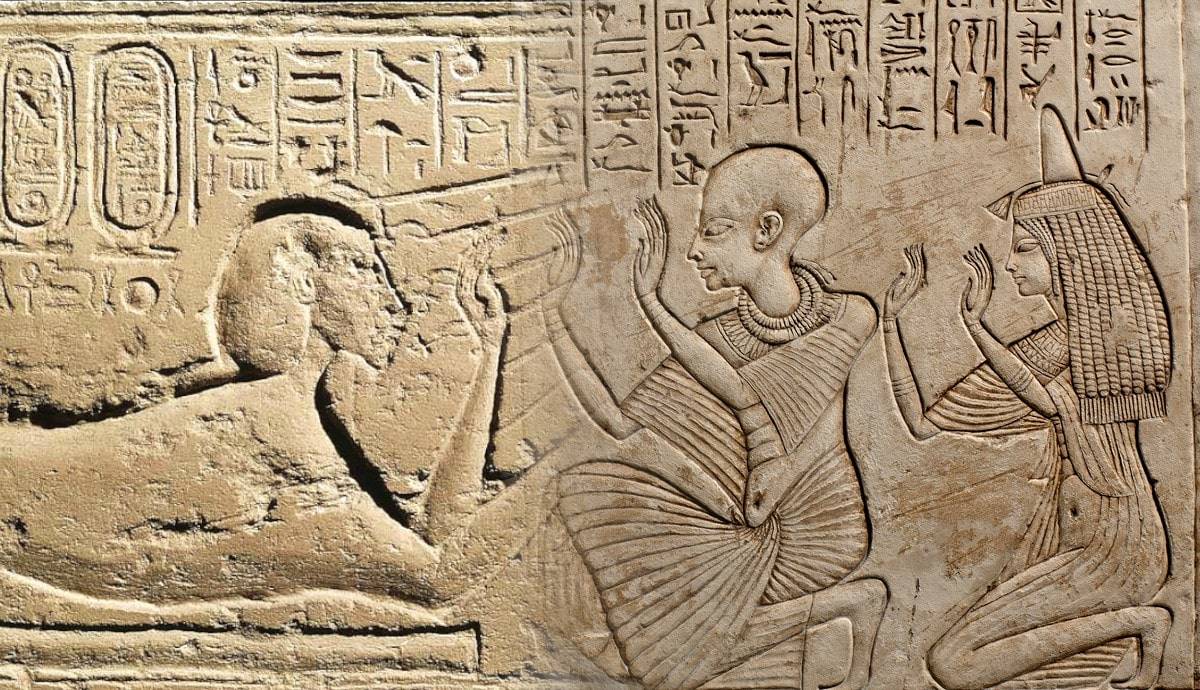 Despite the best attempts of the ancient Egyptians to hide the reign of pharaoh Akenaten, he has been rediscovered. Likewise, archaeologists and historians continue to uncover clues that Egypt may have had several bouts of the plague even though a hubris-driven monarchy may have tried to keep it out of the records. Although Akhenaten inherited a stable kingdom, the wealthiest and most powerful in the ancient world, discord and disease may have led a renegade pharaoh to abandon his religion and royal residence.

The Talatats: Telling the Tale of Akhenaten

Talatats are the stone bricks, as long as a man’s back and almost as wide, that Akhenaten used to build the structures in his new city that he called Akhetaten, known today as Amarna. After his death, subsequent rulers, including his own son, Tutankhamun, tore apart everything Akhenaten had built. Or they tried to. Akhenaten’s reign was so distinctive it was hard to hide, and even harder to erase. Egypt had never seen anything like it before or since. Building changed. Art changed.  Belief in God changed at least for some for a while.

The unique stones, the talatats, with which Akhenaten had built his equally unique buildings, were often decorated. Originally gracing the walls of palaces and temples, they tell stories that aid archaeologists today. Talatats are solid, like facts, but only provide support when placed correctly and in context, and ultimately, the ancient Egyptians tried to hide what they were. Talatats make good metaphors.

Talatat 1: The Hittite Army Brings the Plague Home from Egypt

Whatever organism caused the disease, it was relatively new to the Hittites and it came from Egypt. If sending plague-ridden soldiers to Egypt had been intentional, it was the first recorded employment of biowarfare. The microbe at fault, whether parasite, bacteria, or virus, became a microscopic Trojan horse, while the actual Trojan horse, if it existed, still lay 200 years in the future.

There are several possible reactions of a monarch to a plague among his people. The Hittites demonstrated one. The Hittite king, Mursilli II, a remaining son of Suppiluliuma, wails to the gods and points to misdeeds of his father and grandfather as one of the reasons the gods may be angry with Hattusha. He promises to fix the wrongs they committed and he records it all, both the prayer and the promises.

The Egyptian pharaohs, not known for their humility, may have had an entirely different reaction. The pharaoh did not have to admit the plague existed at all and Egyptian records were notoriously full of hubris with few laments. In addition, denying a plague, or at least not acknowledging it, may have been an astute political move. Enemies of a healthier country might have considered it an opportunity if the wealthiest, most coveted of nations had a weakened populace. Arguably, it would have been in the best interests of Egypt to present an impenetrable front.

Talatat 2: Amenhotep III and the Plague

Evidence of a plague in Egypt begins with Amenhotep III, Akhenaten’s father. He inherited a vast kingdom with secure boundaries due to his predecessors’ military prowess. With secure borders came immense wealth because of the gold coming from the Nubian mountains. In turn, Amenhotep III strengthened the kingdom further, not through battle, but by cementing agreements and making allies. There were no wars during the time of Amenhotep, which makes it odd that he commissioned over 700 large statues of the goddess of war and pestilence, Sekhmet.

In How Disease Affected the History of the Egyptian Empire, the author points out that not only did Sekhmet gain in popularity during Amenhotep’s III reign, but devotion to Ptah, creator, and protector of life, increased. A small god, Bes, who was the protector of health and home, also gained adherents.

In Year 11 of Amenhotep III’s reign, the pharaoh began construction on a new summer palace in Malkata. Perhaps he did this to escape a plague-ridden Karnak. It would be a weak conjecture except, perhaps not coincidentally, the pharaoh’s scribes stopped recording from Year 12 to Year 20, 1380 BCE to 1373 BCE. Amenhotep who had documented the smallest projects since the time of his coronation ceased making records.  The silence lasted six years. In Year 20, the records begin again, lasting until the end of his reign in Year 39. Finally, it is suggested that by the middle of Amenhotep’s reign, tombs were built hastily and more people were dying as couples than was the norm.

Talatat 3: Transitioning to the All-Powerful and Only Sun God

Amenhotep IV/Akhenaten did not wait long to start changing the religion. Within months of assuming the throne, he made a speech. The words were found inscribed on stones that were later repurposed for another pharaoh’s building construction. King Amenhotep IV claimed that the current plurality of gods had failed, except the evidence of their failure seems a little thin on the surface. The country was at peace. There was great wealth. The pharaoh commanded more lands and people than ever before in their history. By most standards, Egypt was at the apex of success.

In the fifth year of his reign, Amenhotep IV decreed a new city and a new name for himself. He had a young family and a wife, Nefertiti, to whom he was clearly devoted. The couple probably had three daughters when they left Thebes for Amarna: Meritaten, Meketaten, Ankhesenpaten, all under the age of five. The princesses and Nefertiti were often depicted on the walls of Amarna in sweet family scenes, contrary to previous Egyptian artistic tradition. For a man especially devoted to his family, fear of the plague may have run exceptionally high.

To complete the picture, there was a political struggle between the pharaoh and the priests of Amun. By removing Amun as a deity, Akhenaten decisively cut off any power plays the priests might have attempted in the name of “Amun”. Akhenaten announced that Aten only communicated through him, the pharaoh.

If a plague hit or grew worse, it may have been a sign that the worship of Amun was indeed spiritually suspect and Akhenaten could, with a clear conscious, shed the shackles of the priests of Amun and take up the adoration of the one true God, Aten, an idea that his father had resurrected from the Old Kingdom for much the same reason, under the heavy shadow of the Amun priesthood.

Once he established himself at Amarna, Akhenaten rarely left it. Traditionally, pharaohs spent a large part of the year traveling to various festivals throughout Egypt that were held in honor of the gods. Since there was only one god now, Akhenaten stayed in Amarna. Whatever that did to him politically, it conceivably could have had the result of protecting him and his family from the plague, except that it did not.

Talatat 4: Year 14 in the Reign of King Akhenaten

By the 14th year of his reign, Akhenaten and Nefertiti had six daughters. Three more had been born since arriving at Amarna: Neferneferuaten Tasherit, Neferneferure, and Setenpen. Setenpen was five. Akhenaton had at least one son, Tutankhamun, who had been born by Year 14 but his mother was probably not Nefertiti.

Year 14 was disastrous. The royal couple lost Setenpen (5), Nefernenure (6), and Meketaten (10). The king’s mother, Queen Tiye, and a wife of Akhenaten, Kiya, perhaps the mother of Tutankhamen, were also buried that year. The plague seems a likely candidate.

Initially, it was thought Nefertiti had died also for the records concerning her seem to stop about then, but she reappears beside Ankhenaten’s side in a later accounting, and it is thought, she outlived her husband. She may have even ruled briefly.

If Akhenaten thought that by throwing everything he had into the worship of the Aten, that he and his family would be blessed and live in peace, Year 14 is when he discovered how terribly wrong he was. Indeed, his final years were far more shadowy and he died three or four years later.

Akhenaten and Talatat 5: The Cemetery at Amarna

In 2002, archaeologists discovered the cemeteries of the workers who lived in Amarna. Some 20,000 to 30,000 people lived there during its short existence of fourteen years. The results of the graveyard analyses are shocking. Around 45% of the people in the cemeteries are between the ages of 8 and 20, usually the healthiest age group and the least likely to populate cemeteries. Most of the skeletons show signs of malnutrition and stunted growth.  By measuring long bones and teeth development in comparison to other sites, the developmental delays were shown to be severe in Amarna. An adult in Amarna was significantly smaller than his peers elsewhere.

Ultimately, DNA analysis will answer the question about the existence of the plague. Until recently, only bacteria and parasites could be detected with DNA analysis; however, a new procedure holds the promise of identifying viruses, too. In the meantime, some of the results from the cemetery seem to correspond to the possibility of a plague. The youth of the people who died, like the daughters of Akhenaten, was unusual unless there was a plague. The malnutrition could also be attributed to a famine, which often falls upon plague-ridden countries that lose the manpower to work the fields or transport the food.

But there’s one more thing, that could only have contributed to the harshness or the obdurate blindness of the person in charge, and again, the talatats tell the tale. Degenerative joint disease was excessively common in Amarna adults. Around 77% of adults had it in at least one joint, the most severe cases in lower limbs and spine, the less severe in the upper limbs. Talatats are not light. They weigh 70 kg (154lb). The ubiquitous injuries could quite conceivably correspond to regularly lugging weights of 70kg on the back. The testimony from the bones of their colleagues that ended up in the cemeteries indicates that the people hauling these ponderous stone slabs must have been weak and hungry, too.

The actual talatat stones do not tell of any of this. There is no hint of plague, famine, or harsh working conditions. The stories carved on the walls are full of happiness and abundance. Food is everywhere. The warmth of Aten shines down on all: Akhenaten, his wife, his children, and his people. The art is full of humor and affection, a horse scratching its leg, his wife kissing their daughter, a man feeding cattle. It is perhaps consistent with the reign that Akhenaten wanted, the reign he tried to have. But according to the cemeteries at Armana and the fate of his own family, it is neither what he gave, nor what he received.