European witch-hunting became a widespread phenomenon in the medieval period and reached its zenith in the 17th century. Witch-hunters would stop at nothing to drive out a suspected witch. 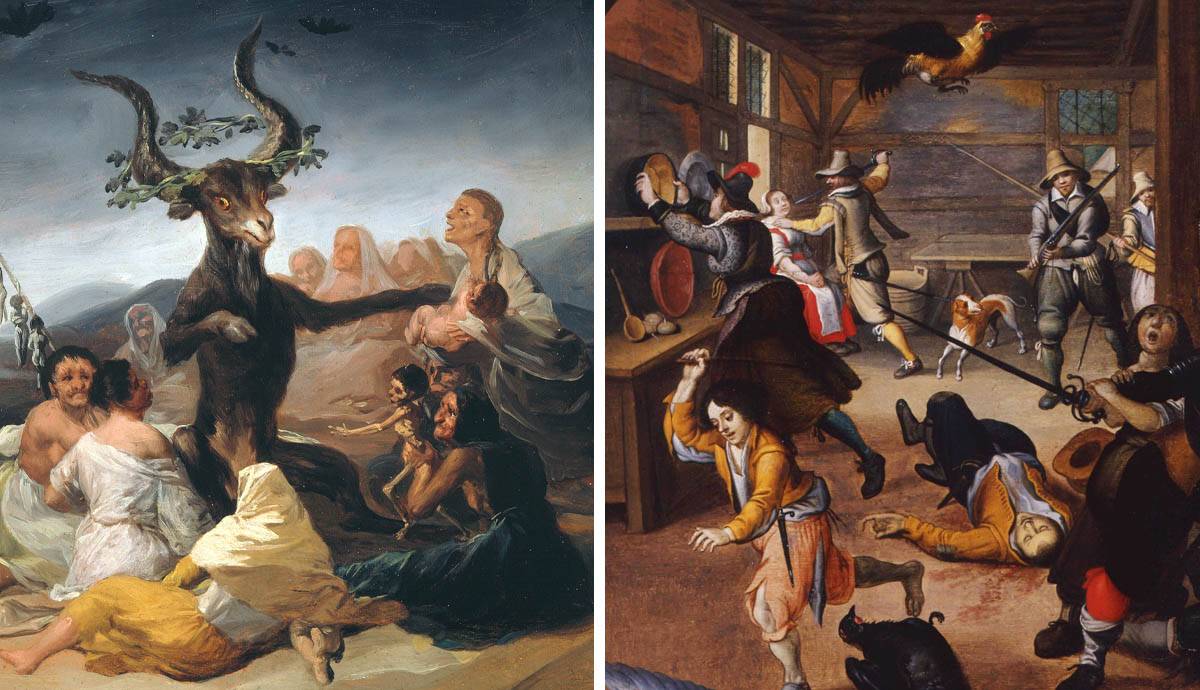 The exact number of people executed during the European witch-hunting craze is unknown, though estimates run to the tens of thousands. In some parts of Europe, such as Germany, the majority of the accused were female, whereas, in Iceland, male witches predominated. A papal bull issued in 1484 by Pope Innocent VIII denouncing witches was seized upon by German Inquisitor Heinrich Kramer, who wrote a handbook on the identification and treatment of witches in 1486. There were various signs that a person was a witch, and there were several methods used to extract a confession from the accused.

In 1428, the first systematic European witch-hunt began in Valais, Switzerland. This witch-hunt lasted eight years and resulted in the deaths of 367 people. To be condemned, a person had to have at least three neighbors publicly state that they were a witch. The majority of those accused in the Valais witch trials were male peasants. These individuals were subjected to torture, under which confessions were extracted concerning meetings with the Devil — who had supposedly urged the accused to avoid mass and confession, in exchange for the reward of the ability to fly. Others confessed to having the power to kill their neighbors or to change into werewolves.

The condemned were mostly burnt to death, with a few being beheaded. Victims were tied to a ladder that was pushed into a pyre. As final mercy, the authorities tied bags of gunpowder around the witches’ necks to hasten their deaths in the flames.

Joan of Arc: Witch-Hunt Cause Célèbre

Possibly the most famous victim of burning at the stake for witchcraft and heresy was Joan of Arc. However, Joan was not killed during the witch-hunting craze period, rather, she was more a victim of politics. Witchcraft was simply a convenient way to get rid of her.

Joan had been subjected by her English captors to 15 examinations, both public and private, before being subjected to a trial in an ecclesiastical court, who found her guilty of heresy. A translation of her trial records stated that “the poison of heresy” had had a transformative effect, turning her into a “member of Satan”. It was determined that Joan was “a blasphemer against God”, and thus she was burnt at the stake in 1431 in Rouen, where it is said she died of smoke inhalation before the flames consumed her.

One of the biggest European witch-hunts took place in Bamberg, Germany, from 1626 to 1631. Of the one thousand people convicted, 900 were burnt at the stake, some of whom were fortunate enough to have been beheaded first. This was one witch-hunt that did not discriminate; people of all ages, genders, and classes were killed during the Bamberg Witch Trials.

It all began in 1626 when people petitioned the local authorities, asking why witches and wizards had sent frosts to destroy their crops. The Prince-Bishop, Johann Georg Fuchs von Dornheim, launched an investigation, and before long one woman was arrested and confessed to causing the frost.

This was one witch-hunt where torture could be used without restriction, resulting not only in confessions but in the extraction of new names. Under torture, the accused confessed to participating in the Witches’ Sabbath, malevolent magic, and sexual intercourse with Satan and his minions. There were so many victims of this witch-hunt that a special building, the “Witch House”, was built in 1627. Torture methods used at this time to extract confessions and accusations from victims included the use of thumbscrews, leg vises, and strappado.

Finally, the husband of an accused woman called Dorothea Flock managed to escape to nearby Nuremberg and made a complaint to the Emperor, who intervened. The Prince-Bishop who spearheaded the Bamberg Witch Trials was removed from his position of power, but not until after he had made a very handsome profit seizing the lands of those he sought to destroy.

Johann Georg Fuchs von Dornheim was replaced as Prince-Bishop in 1631, thus ending the Bamberg Witch Trials. Yet the European witch-hunting craze was not finished. It would rage on for another 20 years, and the last execution for witchcraft in Europe did not take place until 1782.

The greatest number of executions for the crime of witchcraft occurred in Germany during the European witch-hunting craze of the early modern period, with modern data estimating that 42 percent of witchcraft trials that ended in death took place there.

Burning was the most common method of execution for witches in Europe; in England and Northern America hanging was the order of the day.

Methods of Identifying a “Witch”

There were several ways that a witch could be identified, according to the witch-hunters of the era. One such sign that a person was a witch was any mark on the skin, such as a mole, an age spot, or a birthmark. These were seen as a mark of the Devil, and one which the witch used to suckle her “familiar” — a demon that helped the witch in their evil-doing, disguised as a domestic pet such as a cat or a dog. Given that most people have some sort of blemish on their skin, witch-hunters were assured of unearthing a witch by using this method.

Another method of uncovering a witch’s true identity was to prick them with pins. If they did not bleed, then it was a sure sign that they were under the Devil’s control. Some unscrupulous witch-hunters used a retractable pin, so once again, the accused had no hope of passing this test.

Early on in the European witch-hunts, women who were single or elderly were vulnerable to suspicion. Historians attribute this to patriarchal attitudes; single women and widows lacked male protection. Similarly, a woman with a bad temper or a loose mouth was deemed highly suspicious. Men and women who had healing powers using herbal medicine were also targeted.

The “swimming of witches” was another method of identifying a witch during the European witch-hunts. The accused was stripped and thrown into a body of water, with a rope tied around their waist. It was believed that the waters would reject those marked by the Devil, so if the person floated then they were denounced as a witch. If they sank, then they would be pulled out of the water by a rope around their waist. Unfortunately, many people drowned in this manner. Whilst this method was used in Western Europe, it was more widespread in Eastern Europe; water ordeals used by Slavic communities tended to use them as an antidote to periods of drought.

The last official witch trial may have taken place in Poland in 1775 (though there are conflicting records about this). The Doruchów Witch Trial allegedly began after members of the community asked officials in a neighboring village to investigate evidence of sorcery. It was said that 14 women were arrested after being accused of using magic to harm the wife of a local nobleman. Three of these women died after being tortured, with the remaining women being burned at the stake. This witch trial is credited by some historians as begetting the Polish government’s 1776 ban on torture and witch trials.

The End of European Witch-Hunting

There are several theories as to why the European witch-hunting craze happened, such as Catholicism and Protestantism vying for dominance, and the Little Ice Age that caused widespread loss of crops and livestock that resulted in sickness and starvation. These witch-hunts were further fuelled by greedy and unscrupulous witch-hunters, who stood to make considerable financial gains from finding and executing so-called witches in large numbers.

Various political factors which historians have identified as contributing to the European witch-hunting craze, such as the Thirty Years War, eventually came to an end, thus ending a period of political instability. Intellectual factors also helped bring the European witch-hunts to an end, with the Enlightenment encouraging people to take a more rational approach to the concept of witchcraft and to reject superstition. Advances in science meant that moles and birthmarks could be explained as a normal part of human physiology. Thankfully, many European countries began to issue laws that abolished the hunting of witches. Essentially, when there was stable government and economic security, paranoia surrounding witchcraft declined.

The European witch-hunts were good examples of the abuse of localized power. There were many incidents of witch trials in Europe that happened under the jurisdiction of village authorities, where “justice” was meted out by local judges and priests. Germany, France, Switzerland, Belgium, and the Netherlands saw the greatest number of prosecutions for witchcraft; the Catholic countries of Italy, Spain, and Portugal had fewer prosecutions and far fewer executions of “witches” (and these countries were more interested in the persecution of heresies not related to witchcraft).

The last person executed for witchcraft in Europe was a woman called Anna Göldi. She died in Switzerland in 1782, at the age of 48. Anna was born into a poor family. She had an illegitimate child with a mercenary, and this child died in infancy. Anna was accused of murdering her baby, so she fled to another canton. There she found work serving a wealthy family. She lost this job after her employer’s daughters accused her of witchcraft. One claimed she had found needles in her milk and the other claimed to have vomited metallic items. Anna left the family’s service and afterward her employer accused her of witchcraft.

Under torture, Anna confessed, and she was found guilty and decapitated. It was revealed much later that Anna had had an affair with her employer, and when she threatened to reveal it, he conveniently took care of her with an accusation of witchcraft. Anna exemplified the most represented demographic murdered during the European witch-hunts — female, single, over 40, and poor.