HomeArtThe Harsh Materiality of Frank Auerbach in the School of London

The Harsh Materiality of Frank Auerbach in the School of London

Frank Auerbach is a British painter known for his intense works and demanding process. Beyond his significant status in the history of modern art, he remains an essential contemporary artist. 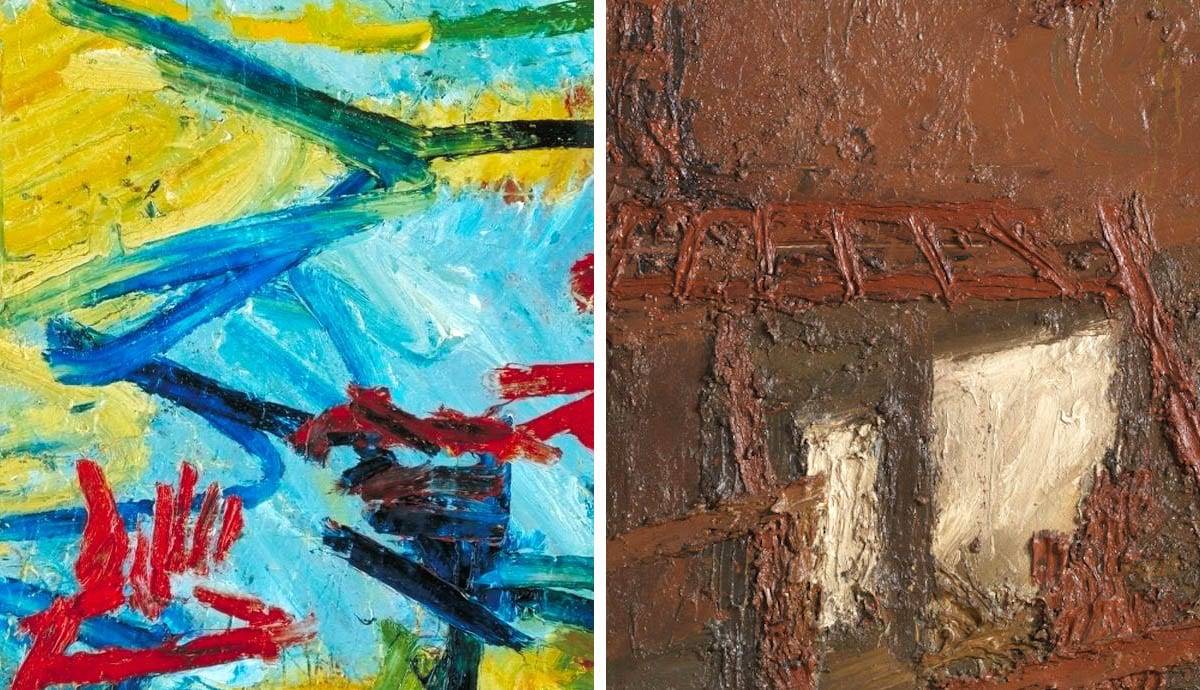 The painter Frank Auerbach was born in Germany in 1931. To escape the Nazi regime, Auerbach’s parents sent him to Britain in 1939, where he has lived since. Auerbach had his first solo show in 1956 and has remained a fixture of British art throughout his career. He has typically enjoyed a much less prominent role than other painters in his orbit, like Francis Bacon and Lucian Freud. Over the course of nearly 70 years in the public eye, Auerbach has remained consistent. The artist committed to his harsh materiality and intensive style of painting, while remaining revelatory and relevant to contemporary art.

Frank Auerbach and the School of London

Frank Auerbach’s paintings exhibit harsh figuration which is emblematic of post-war British art. Emerging alongside painters such as Leon Kossoff, Francis Bacon, and Lucian Freud, Auerbach’s work bears similarities to each. Still, Auerbach’s paintings stand apart and are uniquely abrasive among the School of London, which is home to numerous, famously abrasive painters. His work demonstrates perhaps the greatest tolerance, not only for abstraction, but for distortion—ugliness even.

At once, Frank Auerbach attacks the senses with masses of thick, saturated paint applied with violence that is preserved in the topography. What defines him is a willingness to indulge in fantastically messy painting, with his portraits often leaving just a vaguely head-shaped form, marred with lines, pressed into the surface, searching for the features.

In Head of Gerda Boehm, a swirl of colors, blending in and out of each other, varying in consistency, begin to suggest a head more by the density of marks where the head should be, rather than visual legibility. Frank Auerbach’s paintings hold onto their representations by the barest amount. Only the blatant contrast of his colors, and the force of his brushstrokes cause any of the marks on his paintings remain visually distinct amid the violence of his process.

Those colors are another of Frank Auerbach’s signatures. Though Auerbach’s early work tended more neutral, sometimes even grayscale, he has clarified that this was never an  artistically motivated decision. The early works were made in subdued earth tones because he could not afford brighter pigments in the quantity necessary for his process until the 1960s. Once his financial concern was obviated, Frank Auerbach’s palette dramatically shifted in favor of the intense, saturated colors we see in his mature paintings.

Most of his contemporaries tended towards a much more restrained palette. Even in the case of someone like Francis Bacon, who does involve some purer, more saturated colors, he restricts himself to just one or two such hues at a time, often involving the color just as an overall background.

Auerbach’s paintings are composed of streaks of brilliant, straight-from-the-tube colors, which alternately stand against each other and blur into a grayish mud. These colors run across the canvas, within distinct forms, and without them. The palette is more reminiscent of Auerbach’s stylistic ancestors, the Expressionists of the early 1900’s: painters like Ernest Ludwig Kirchner and Franz Marc, with their garish, exaggerated, almost arbitrary color.

Frank Auerbach’s Bacchus and Araidne, for example, features the same untreated rainbow of cadmiums and ultramarine as a piece like Franz Marc’s The Unfortunate Land of Tyrol. Still, Auerbach sometimes  applies these vivid colors with a fervor surpassing any historical precedent. Perhaps among the Abstract Expressionists in America, a similar color sense can be found in the paintings of Willem de Kooning. Although, Auerbach’s color is largely unprecedented within his immediate group of mid century British artists.

Though Auerbach’s work is grounded in many of the same philosophical and theoretical concerns as the rest of the School of London, his sense of color is unparalleled among them in its bombast. Even Auerbach’s closest stylistic colleague, Leon Kossoff, who practiced a similarly materially intensive style of painting, was always more restrained with color. Physically, visually, and in totality, Auerbach archives a forcefulness all his own.

As it happens, Frank Auerbach’s similarities to the early, German Expressionists cease with these formal issues, because the formal issues are, themselves, the point of Auerbach’s work. The Expressionists distorted and intensified their vision of the world to make palpable an emotional response to the world. Auerbach is, instead, in a space of questioning the potential for painting to even begin to communicate such experiences. For him, the visual exaggeration is an attempt to capture something real of the subject with the imprecise language of painting. Auerbach’s paintings become so heavy with paint because of his determination to connect them to the material reality of the subject.

The difficulty of this task results in a massively time-intensive process. Early on, Auerbach would endlessly layer his paintings until arriving at something acceptable. In recent years, he has come to favor an alla-prima approach; he creates a painting all in one sitting, painting wet into wet, then scraping the canvas clean if he is not satisfied with the result.

In the content as well as form of his painting, Frank Auerbach is nothing if not dedicated. He cycles his way through a few familiar subjects; a recurring series of sites in London for the landscapes, and a trustworthy set of models, accustomed to his laborious working habits, for the portraits. While the Expressionists were guided by the immediacy of emotion, Auerbach is more reserved. His painting demonstrates an unequaled conviction in the labor expended in expressing it, as opposed to the urgency with which it is scrawled on the canvas.

The Harsh Geometry and Materiality of Auerbach

Another hallmark of Auerbach’s work is the angularity. Though Auerbach’s paint mixes on the canvas to soft-edged indistinction, these moments of uncertainty are often enclosed with thick, straight bars of black paint. The geometry in Auerbach’s painting is perhaps most obvious in his landscapes of London, with all the right angles of the city’s architecture. Particularly, this is evident in his series of construction sites, such as Mornington Crescent, with the skeletons of buildings erected amid the post-war wreckage, drawn as criss crossing bars of color.

While these architectural scenes reflect Auerbach’s geometric focus most effortlessly, this concern does persist in his figurative painting; the same constructive, straight bars outline the forms of the human head and torso. Also of note is how Auerbach positions his models. Their heads and toros are tilted, or laid flat, such that they begin to mimic the harsh angularity of the city around them. Compositionally, Auerbach’s Reclining Head of Julia II appears just as much aligned with his cityscapes as his portraits.

In the context of contemporary art, Auerbach is distinguished not by his differences to his contemporaries, but by his pure expression. The expression of their shared concern: the real materiality of painting, as a contrast to the illusory nature of representation. Auerbach’s painting came from a tradition of deconstructive, representational painting which was developing in the mid 20th century, focused on the new theoretical functioning of painting following a period of social turmoil and reordering.

Though Auerbach has some company in the present day, with other holdovers from this era and tradition of painting, like Anselm Kiefer and George Baselitz, the work of these artists appears distinct compared to more recent painters interested in the same overwhelming materiality which defines all of their work. When Auerbach came to prominence, painting suffered immense anxiety: mirroring the trauma of the world wars, entering a crisis, questioning its own viability as a medium moving forward.

As of now, that anxiety has been resolved in many ways. Painting has maintained a new niche, further removed from its hegemonic position in visual culture; Auerbach came to his style when the old form of painting was dying, younger artists are coming to theirs as a painting is born again. Painting has accepted a less strenuous role, and artists who might bear a superficial resemblance to Auerbach in terms of an intense materiality, like Dana Schutz or Alison Schulnik, demonstrate a far different tone than anything from around the midcentury. Rather, their works are playful in their experimentation with the form of paint and painting, uninflected with the tremendous anxiety of the post-war era.

Auerbach’s paintings remind us of a painting scared of itself. They arrive at a time when painting’s dominant position in the art world was threatened by more immediate mediums like photography and film. The materiality of painting was an inescapable and terrible reality. In contemporary art, painting is on the fringes of mainstream culture, and materiality appears as a sort of relief from the immaterial digital manner through which we experience most contemporary art currently.

Frank Auerbach’s work reminds us of the contingency of painting and our relationship to it. The specific anxieties of his time have shaped Auerbach’s work through to the present day, where they stand in clear contrast to more recent concerns. In no way does this imply that Auerbach’s work is any less vital now. Rather, it is because of his alternate relationship to painting that his work is increasingly necessary. It approaches painting from a position outside of our collective, present understanding. It warns against identifying our present conception of painting as unaffected or natural.

Frank Auerbach and his paintings perform a direness and diligence that is without a recent parallel. Presently, his work stands as a relic, originating from a lost conception of painting and as an emergently crucial bellwether, indicating the trajectory of painting towards something new.