HomeAncient HistoryWhat Was the Hellenistic World Like? Alexander the Great’s Legacy

What Was the Hellenistic World Like? Alexander the Great’s Legacy

Alexander the Great’s reign lasted a mere 13 years. Yet, his achievements had an immense impact, creating one of the most fascinating cultural mélanges in history — the Hellenistic world. 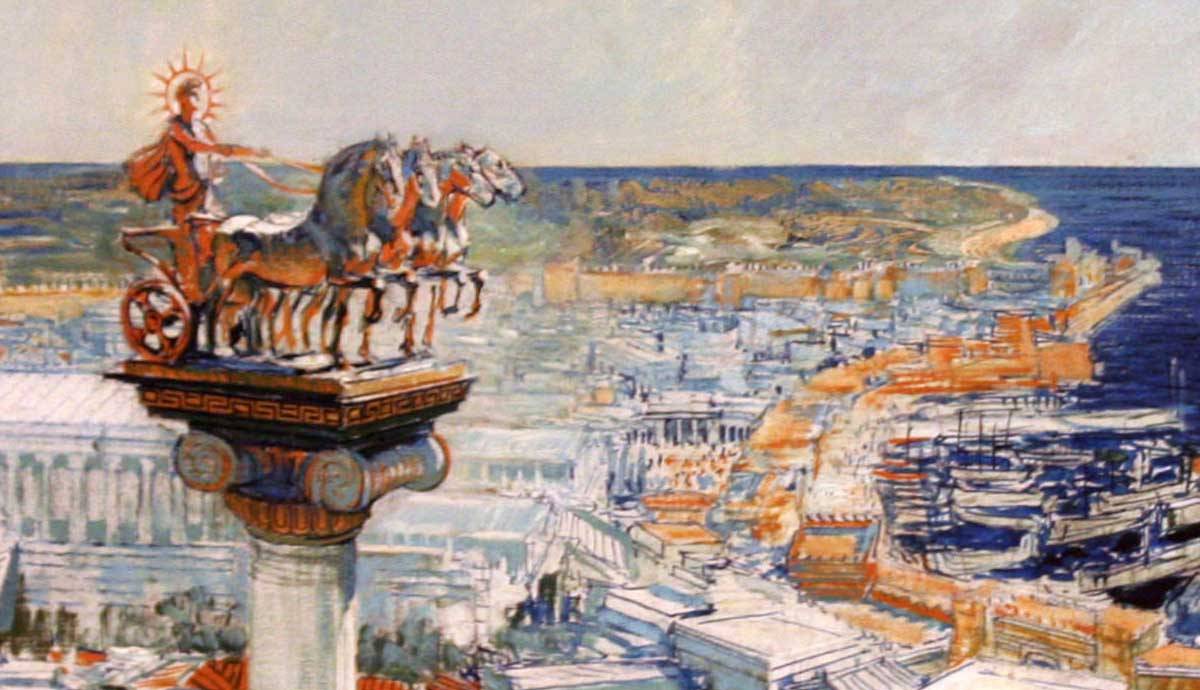 Alexander the Great is well known for his grand military conquests, which created a vast Empire, stretching from Greece all the way to India. Unfortunately, he died young, and the Empire soon collapsed in a series of wars led by his successors. Yet, Alexander the Great left a lasting legacy: the Hellenistic world. Its rival dynasties waged bloody wars, but also engaged in trade, exchanging people and ideas. The result was the emergence of a unique cultural network that spread Greek ideas and culture across the lands ruled by Alexander’s successors.

For three hundred years, Hellenistic culture, religion, science, and art, shaped and unified a vast area, from Eastern Mediterranean to the Himalayas. The impact of Hellenization was so powerful that when the Romans conquered the last Hellenistic kingdom, they too fell under the spell of Alexander the Great’s legacy. In turn, the adoption of Hellenistic ideas reshaped Roman culture and society, laying the foundations for our modern world.

In 334 BCE, Alexander, king of Macedon, and his army composed of Macedonian and Greek troops, invaded the Persian Empire. Ten years later, Alexander the Great was the ruler of a vast Empire that stretched from the Mediterranean shores to the Indus River. However, soon after Alexander’s untimely death in 323, this vast realm began to fall apart as his generals and successors — the diadochi — fought each other for supremacy. By 300 BCE, three generals emerged as the victors, establishing powerful dynasties that would rule and battle over the Hellenistic world.

In the West, the Antigonids reigned over the Kingdom of Macedon, which encompassed roughly the area of present-day Greece and the southern Balkans. Further south, across the vast expanse of the Mediterranean Sea, lay Egypt, the fief of the Ptolemaic dynasty. Finally, the largest part of Alexander’s former Empire, the enormous territory stretching from Asia Minor to India, was under the control of the Seleucid kings. For the next three centuries, these three dynasties created a unique vibrant world, as united by culture and learning as it was by statecraft and steel.

The World of Cities

Alexander the Great established several cities bearing his name in his conquered territories. Not to be outdone by their former master, the diadochi, too, founded settlements across the Middle East, as far as Afghanistan and India. Inspired by the Greek polis, these cities became the most recognizable feature of the Hellenistic world. They all had a similar layout and the same set of public buildings, like the city council (boule), public square (stoa), temples, theaters, libraries, and gymnasia. Monuments, statues, and inscriptions filled the streets and squares, celebrating the achievements of wealthy patrons — rulers and prominent city members.

Despite paying tribute to their absolutist kings and providing soldiers for numerous wars, each city was a self-governing community, had its own separate laws and coined its own money. Initially, the cities were populated by Greeks and Macedonian settlers — either veterans of Alexander’s conquering armies or immigrants brought in to bolster the new regimes. These people worshipped their traditional gods — the Greek pantheon — and temples of Zeus, Athene, and Apollo soon popped up on rocky outcrops (acropolis) above cities. The locals moved in as well, adopting the lifestyles of the colonists. However, they also brought their own traditions and beliefs, which fused into a fascinating mélange — the Hellenistic culture.

A Blend of Old and New

Hellenistic cities, be they large capitals like Alexandria ad Aegyptum, Antioch, Ephesus, or other smaller towns, all played an essential role in disseminating Greek language and culture throughout this vast region. Even the old urban centers that predated Alexander the Great’s conquests gradually became Hellenized. While the rulers and the aristocracy spoke classical Greek, the lower classes (those living in the cities) used koine — a sort of colloquial Greek — in everyday communication. The usage of the common tongue facilitated trade and the spread of ideas from city to city and from kingdom to kingdom. Moreover, the Greek ideas ventured beyond the boundaries of the former Alexander’s Empire, traveling by ships to India and even further to Southeast Asia.

The Greek mindset dominated the Hellenistic world, but cultural influences went both ways. In Egypt, the Ptolemies portrayed themselves as pharaohs, while in remote Bactria, the Indo-Greek kings became patrons of Buddhism. Egyptian sacred cults spread throughout the Middle East and the Mediterranean, as did mystery cults from Mesopotamia and Iran. These newly minted deities joined the established pantheon. The best example of this religious syncretism is undoubtedly Serapis, a blend of the Egyptian gods Osiris and Apis with the Greek god Zeus, initially promoted by the Ptolemies to unify the Greeks and Egyptians but later adopted by the Romans. Many Hellenistic rulers embraced the oriental idea of divine kingship and, like their founder — Alexander the Great — they were worshiped as living gods, a thing which would have appalled earlier generations of Greeks.

The Golden Age of Culture and Science

Although the Hellenistic kingdoms were essentially military monarchies, these rulers enjoyed flaunting their power and wealth. The best way to do so was through patronage of the arts, which filled the Hellenistic world in quantities not seen before, from opulent royal palaces to the city streets. Unlike their predecessors, Hellenistic sculptors focused on individuals, paying special attention to human anatomy, emotion, and expression. As a result, some of the best-known works of Greek sculpture belong to Hellenistic art: the Venus of Milo, theDying Gaul, Laocoon and his Sons, and the Nike of Samothrace. The Hellenistic elites were the first art collectors, and the period signaled the beginning of replication and mass proliferation of art objects.

Architecture, too, reflected the vast wealth of the elites. Rulers and city councils strived to impress, and they succeeded. Massive royal palaces displayed the immense power of kings and, by extension, the realm. With their lavishly decorated Corinthian columns, giant temples were a source of pride for every citizen, leaving a visitor with the impression that they were truly in the presence of the gods. However, large scale and exquisite designs were not limited only to religious or royal buildings. The Pharos lighthouse, one of the tallest buildings in the ancient world, dominated the skyline of Alexandria. Along with the temple of Artemis in Ephesus and the Colossus of Rhodes, Pharos was rightly considered one of the Seven Wonders of the Ancient World.

Hellenistic kings spent vast sums promoting science, transforming the cities into intellectual powerhouses. Scholars, philosophers, scientists, and engineers from all parts of this diverse and vibrant world would meet and exchange ideas and knowledge, leading to remarkable scientific discoveries. Athens remained a preeminent university town, but enormous libraries, museums, and even zoos sprang up in the big new cities of the Hellenistic world — Pergamum, Ephesus, Antioch, and above all, Alexandria. The famous Library of Alexandria, which contained over 500,000 volumes, attracted foremost intellects of the ancient world, such as inventor Archimedes, naturalist Theophrastus, mathematician Euclid, and geographer Eratosthenes. In addition, Alexandria’s vibrant Jewish community,  one of many scattered across the Hellenistic world, translated their scriptures into Greek — the Septuagint — embedding Greek ideas into the religious thought of Judaism and, later, Christianity.

Alexander’s the Great’s Legacy Beyond the Hellenistic World

While Greek language and culture permeated the cities of the Hellenistic world, for many people living in the countryside, it remained an exotic, alien thought. As a result, rural populations retained their traditional ways of life and their native languages and culture. Nowhere was this more evident than in Ptolemaic Egypt, where the capital of Alexandria and the major Greek-inhabited cities of the Nile delta stood in stark contrast with the hinterland. After all, the first Ptolemaic ruler who deigned to learn the native language was the last member of her dynasty — Cleopatra VII Philopator.

This animosity between the rulers and the natives led to a series of revolts, undermining the kingdom’s stability and offering an opportunity for an ambitious upstart. After taking control of the Western Mediterranean, Rome looked eastwards to the wealthy Hellenistic kingdoms. The first to fall was Macedonia, in 168 BCE; the final one was Ptolemaic Egypt, annexed by Rome in 30 BCE. Yet, while Rome extinguished all of the Hellenistic dynasties, it did not eliminate the Hellenistic world. Instead, the conqueror was absorbed by the very thing it had conquered. Under the auspices of the mighty Roman Empire, Hellenistic thought, ideas, and culture spread to the areas never reached before — to the Atlantic coast, the rivers Rhine and Danube, and even across the English Channel. By embedding itself into the Roman culture and society, the legacy of Alexander the Great outlived the Roman Empire, becoming an integral part of western civilization and, by extension, our world.