HomeStoriesThe Counterculture Hippie Movement of the 1960s and 1970s

The Counterculture Hippie Movement of the 1960s and 1970s

The counterculture movement was the result of a generation that rejected social norms and traditional ways of previous decades. 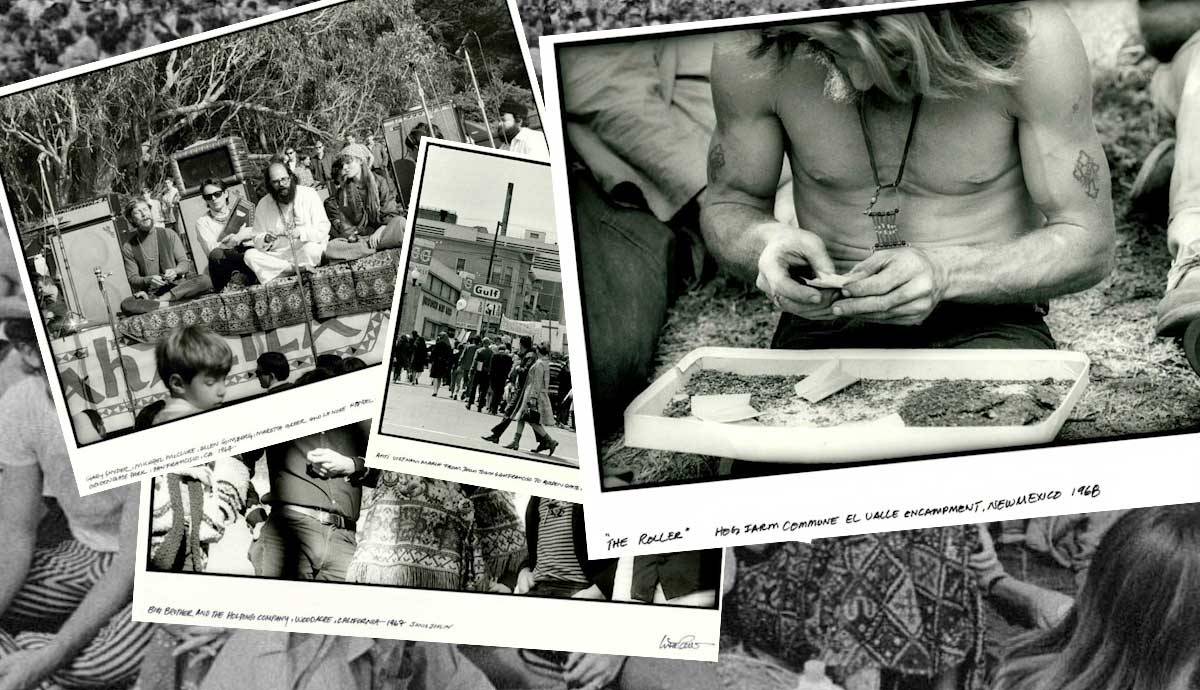 A new identity was born at the start of the counterculture movement in the late 1960s. This youth movement criticized consumerism, promoted peace, and yearned for individualism. The 1960s and ‘70s revolutionized pop culture and encouraged social reform. This 20-year period was a turning point in history that influenced future decades, and still has an impact on the present day.

The counterculture movement involved youths who rejected mainstream American culture and societal norms. The “American dream” was no longer a goal for this new generation. Prior to the 1950s, the ideal woman was a housewife who cared for the children, cooked, and cleaned the home. Men were expected to find a steady job and be the provider for the family. Counterculture began to boil up in the late 1940s and seeped into the 1950s with the beat movement. This movement involved literary “hipsters” who rejected social norms, often referred to as beatniks.

The beat movement was the foundation of the counterculture movement that emerged in the late 1960s. Beat poetry began in New York City in the 1940s and made its way to San Francisco a decade later. Beatniks focused on topics that clashed with mainstream culture and ideas. These perspectives carried into a slightly younger group in their teens to mid-20s.

In the latter half of the 1960s, San Francisco became a hotspot for tens of thousands of youths who shared the common desire for peace and freedom. Haight-Ashbury was the most notable San Francisco neighborhood that drew in almost 100,000 youths during the summer of 1967, who soon became the heart and soul of the counterculture movement. This summer of youth migration became known as the Summer of Love, which marked the prominence of a movement that would impact decades to come.

Consumerism was at an all time high in the 1950s. World War II encouraged production of goods, provided an abundance of jobs, and motivated those on the home front to support their nation by spending. The economy finally felt relief for the first time since the booming age of the Roaring Twenties, before the Great Depression collapsed it all. People were focused on building families, working a steady job, and buying homes. Appliances, cars, and TVs were at the top of consumers’ list to modernize their homes. Additionally, consumer credit became a popular way for people to afford more things.

The counterculture movement rejected most things that were praised by the government. This included consumerism. The hippie-style clothing worn was often hand-me-downs bought at flea markets, yard sales, or second-hand shops. This was a purposeful effort to avoid buying from major brand-name stores and contributing to mainstream consumerist habits. Most of the counterculture movement youths were children of the middle and upper-middle class. They opposed everything that the previous decades were all about: wartime support, materialism, and work.

The Hippie Identity of the Counterculture Movement

Not everyone involved in the counterculture movement was involved in the hippie movement. The two merged together because of matching perspectives. The hippie identity wasn’t actually accepted by hippies themselves at the time. Many preferred to be called a “freak” or “love child.” The term “hippie” was coined by local media outlets in San Francisco.

Hippie stuck as a derogatory identifier of rebellious youths participating in counterculture. It later manifested in a much lighter sense. It is generally no longer viewed as an insult to the modern-day hippie. Individuals who referred to people as hippies in the ‘60s and ‘70s were called “straights.” This phrase referred to anyone who didn’t support the counterculture movement. It described people who followed the traditional and “square” ways of life.

There were a few different types of hippies, including visionaries, freaks and heads, and plastic hippies. Although all youths who identified as love children were against much of the social and political norms of the times, many weren’t activists or protestors. Some groups fit the general description of a hippie but were more politically active and involved in protests. Examples of these groups included the “Diggers” and “Yippies.” Both groups emerged in the latter half of the ‘60s. Yippies stemmed from the Youth International Party. Diggers and Yippies were viewed as radical leftists who were anti-war socialism supporters with anarchist-like points of view.

Visionary hippies closely resembled the intellectual beatniks of the previous decades. They were the original hippies with anti-conventional values that rejected the ways of the generation before them. The freaks and heads were the hippies who sought freedom through spiritual connections using hallucinogenic drugs, such as lysergic acid diethylamide (LSD). Plastic hippies took on the classic hippie fashion, dabbled in drug use, and enjoyed the atmosphere the hippie movement brought. They didn’t fully resonate with the actual roots of the movement and essentially just scratched the surface of what it meant to be a love child at the time.

Hippies were the baby boomer generation. There was a 14.5% population increase between 1940 and 1950. As a result, tens of millions of individuals came of age in the 1960s and ‘70s. This created a vast, rebellious generation that became the main focus for two decades. As with many youths coming of age, taking on rebelling perspectives and defying the common order wasn’t unheard of. However, the number of youths spread across the nation allowed the counterculture movement to expand exponentially.

Anti-War & the Rejection of Mainstream Society

The “American dream” was in full motion for many in the late 1940s and ‘50s. People felt a sense of patriotism. Many supported the first few years of US involvement in the Vietnam War to stop the spread of communism. This was especially apparent for those who lived through the first and second waves of Communist paranoia, known as the Red Scare. Counterculture activists were disappointed in the US government’s involvement in the Vietnam War.

The anti-war movement was a big part of counterculture. Just as Americans were experiencing relief from the Great Depression and the peace of post-WWII, the US entered the Vietnam War. More than two million American men were drafted. Some counterculturists took the opportunity to show their contempt for the war by burning their draft cards. Hippies who were especially against the war were known as “flower children” and advocated for peace and love. The peace sign, created by British artist Gerald Holtom, became an anti-war symbol and iconic representation of the counterculture hippie movement. It was originally designed as a logo for Nuclear Disarmament in 1958.

There were also other movements taking place within the counterculture movement. The Civil Rights Movement waged on from the mid-1950s to the late ‘60s. The Women’s Rights Movement emerged alongside counterculture. People were tired of oppression and discrimination. Youths were yearning for individuality, and many refused to carry on the bad habits of the generations that preceded them.

Perhaps one of the counterculture movement’s most significant impacts was its influence on pop culture. Fashion, music, and media were all affected. The iconic styles that emerged from the counterculture movement were bright, flamboyant, and less conventional. Comfortability and individuality conquered over conservative wear. Twiggy, Cher, and Janis Joplin are just a few women who influenced the fashion scene of the late ‘60s and early ‘70s. Bold colors, patterns, and the free-spirited bohemian aesthetic were in full swing. Part of men’s fashion was heavily influenced by the rock ‘n roll scene that bloomed in the late 1950s. Long hair, bell-bottoms, and vibrant patterns were common among male youths.

Rockabilly, which stemmed from jazz, blues, and gospel from previous decades, had a heavy influence on the counterculture movement. Different subgenres of rock emerged, such as psychedelic, folk, soft, and pop rock. Psychedelic rock fit the counterculture hippie movement scene, making sex, drugs, and rock ‘n roll a common identifier of the ‘60s and ‘70s. These subgenres would influence the punk rock and hair metal scene of the 1980s.

Some of the most iconic and influential singers and musicians popped up in the ‘60s and ‘70s. One of the most defining events of the movement was the 1969 Woodstock Music and Art Fair that took place in a muddy farm field in Bethel, New York. Hundreds of thousands of people attended, well over the estimated number. It was an unorganized mess but so successful it became the epitome of the counterculture hippie movement. People traveled far and wide to attend and indulge in music and drugs. More than 150 musicians attended with 32 musical acts. Some of the most notable performers of the time played at the event, such as Janis Joplin, Creedence Clearwater Revival, and Jimi Hendrix.

Media played a significant role in not only pinning love children and freaks as hippies with a negative connotation but also in romanticizing the movement. After the Vietnam War ended in the mid-1970s, the counterculture movement died down. However, the media continued to idolize the hippie scene. Even today, the hippie movement is often missed by those who desire to live in a more “free” society. However, not everything was as joyous as it seemed.

The large influx of people coming into the Haight-Ashbury neighborhood turned it into a poverty-stricken area that wasn’t well-kept. This led to a lot of crime and changed the scene from a safe haven for artists, intellectuals, and those alike to a dangerous and unsanitary place. The image of peace, love, and freedom from the movement stuck around thanks to the media, but the more bleak truths of the two decades were kept in the shadows.

Memories of the Counterculture Movement Live On

The counterculture movement of the 1960s and ‘70s was arguably one of the most influential time periods in modern American history. A more individualized identity was sought after by coming-of-age outsiders that took over the nation due to the baby boom. Nonconformists emerged and publicly rejected traditional social norms. The anti-war perspective encouraged an idealistic peace and love movement that made the decades somewhat euphoric.

Pop culture was forever changed, with fashion and music taking on revolutionary forms. The bohemian aesthetic is still appreciated and reappears in fashion in waves. The media romanticized the movement so much that it would forever be remembered as a time when people felt the most free, which holds some truth to a certain extent. The defiance of mainstream culture helped push other movements forward, such as the Civil Rights and Women’s Rights Movements. It was truly one of the most captivating and transformative moments in social and cultural history.

By Amy HayesBA History w/ English minorAmy is a contributing writer with a passion for historical research and the written word. She holds a BA in history from Old Dominion University with a concentration in English. Amy grew up in the historic state of Virginia and quickly became fascinated by the intricate details of how people, places, and things came to be. She specializes in topics on American history, Ancient and Medieval England, law, and the environment.