How Did Japanese Art Influence Impressionism? 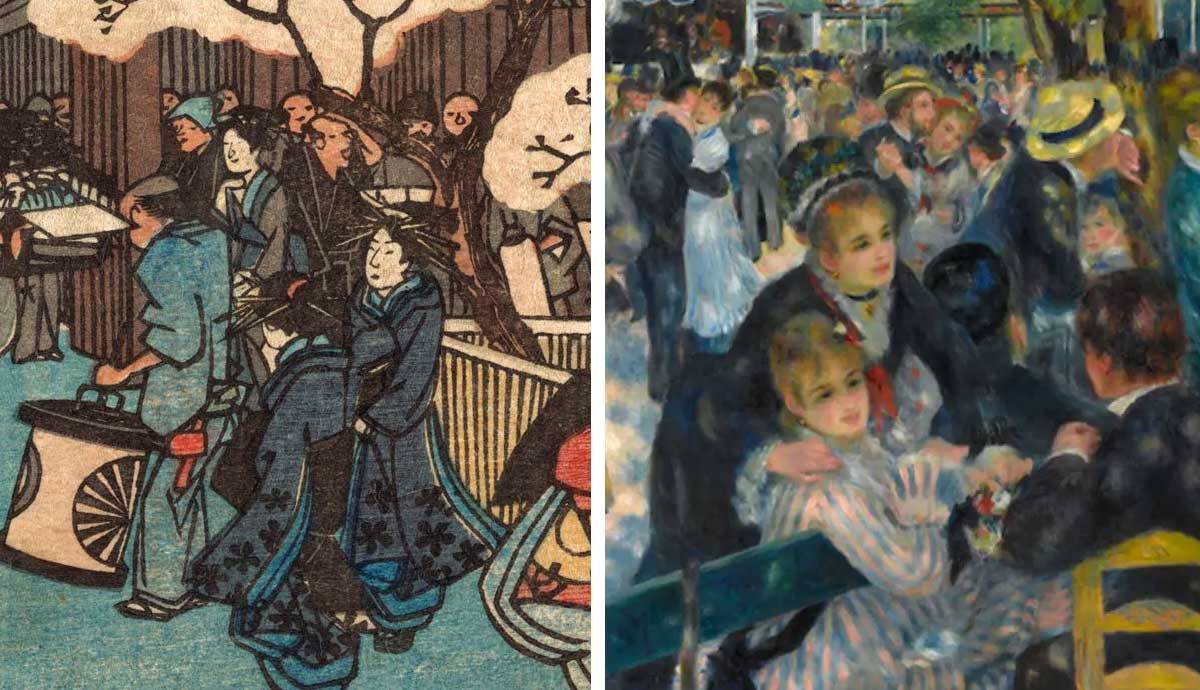 French Impressionism was a breath of fresh air for the European art world. Its artists introduced luminous colors, honest subject matter and bold new compositions. But did you know that many of these qualities we so admire in Impressionism came from Japanese art? During this remarkable period in European art history, Japanese artworks flooded the Western market, and their widespread popularity inevitably trickled down into artistic practices. This trend is sometimes referred to as Japonisme. Many of the leading Impressionists even collected Japanese art. For example, Claude Monet’s home at Giverny reveals his own intimate collection of ukiyo-e prints. We look through the most fundamental concepts the Impressionist stole from Japanese art.

The close, cropped compositions prevalent in Impressionist art were as influenced by snapshot photography as they were by Japanese woodblock prints and folding screens. Edgar Degas integrated this popular Japanese trope of cutting into images in many of his most famous works of art. In his backstage ballet dancers Degas explores how cropping an action sequence mid-scene can create the spirited sensation of movement. This practice also gives his art a fresh spontaneity that can become lost in more staged, formal compositions.

Another trick the Impressionists borrowed from Japanese artists was the exploration of unusual angles and directional lines of perspective. Japanese artists often made wide-angle, panoramic scenes seen from a high vantage point, and sometimes from one side.

Many Impressionist artists painted wide angle views when portraying the vast boulevards of Baron Haussmann’s remodeled Paris. They did this to show off the city’s wide roads and streets, as seen in Camille Pissarro’s Boulevard Montmartre on a Winter Morning, 1897. Meanwhile, other Impressionists played with the Japanese tradition for sharp angles and directional lines that draw us into the distance, such as Gustave Caillebotte’s busy street scenes.

One trademark feature of Japanese art that sets it apart from Western art of the 19th century is the use of bold, flat panels of color. Impressionists adopted this decorative, design-like quality as a radical and modern new way of making art. For example, in Mary Cassatt’s intimate, interior scenes, we see her emulating the linear contours and flattened forms of Japanese prints. In doing so, she rejects the Western classical traditions for suggesting the form and volume of the human body.

Decorative, brightly colored floral motifs are a recurring theme in many different styles of Japanese art and design. The Impressionists were particularly fascinated by them. In much of Claude Monet’s late art, we see the influence of Oriental flowers coming to the fore.

In fact, Monet’s entire water garden at Giverny was based around Japanese flora and fauna. He even designed a curved Japanese bridge as its defining feature. Meanwhile, the famed Water Lilies he painted there are a true homage to Oriental plants and flowers, which played a vital role in both the artist’s art and his life.

In many Japanese ukiyo-e prints we see women taking part in domestic, sometimes deeply intimate scenes, performing daily rituals like brushing their hair or bathing. Both Edgard Degas and Mary Cassatt explored similar ideas in their own art, while also documenting private scenes from their own lives.

Many Impressionists adopted both the visual imagery of Japanese art and the social commentaries of Baudelaire into their astute observations of Parisian city life, particularly Pierre-Auguste Renoir, who enjoyed capturing the brimming optimism of thriving young people in the city center.