HomeArtKay Sage: The Mesmerizing and Tragic Life of a Brilliant Artist

Kay Sage: The Mesmerizing and Tragic Life of a Brilliant Artist

Kay Sage was one of the most talented, active, and exhibited women surrealist painters and yet she is not famous. She had a remarkable life and a tragic death. 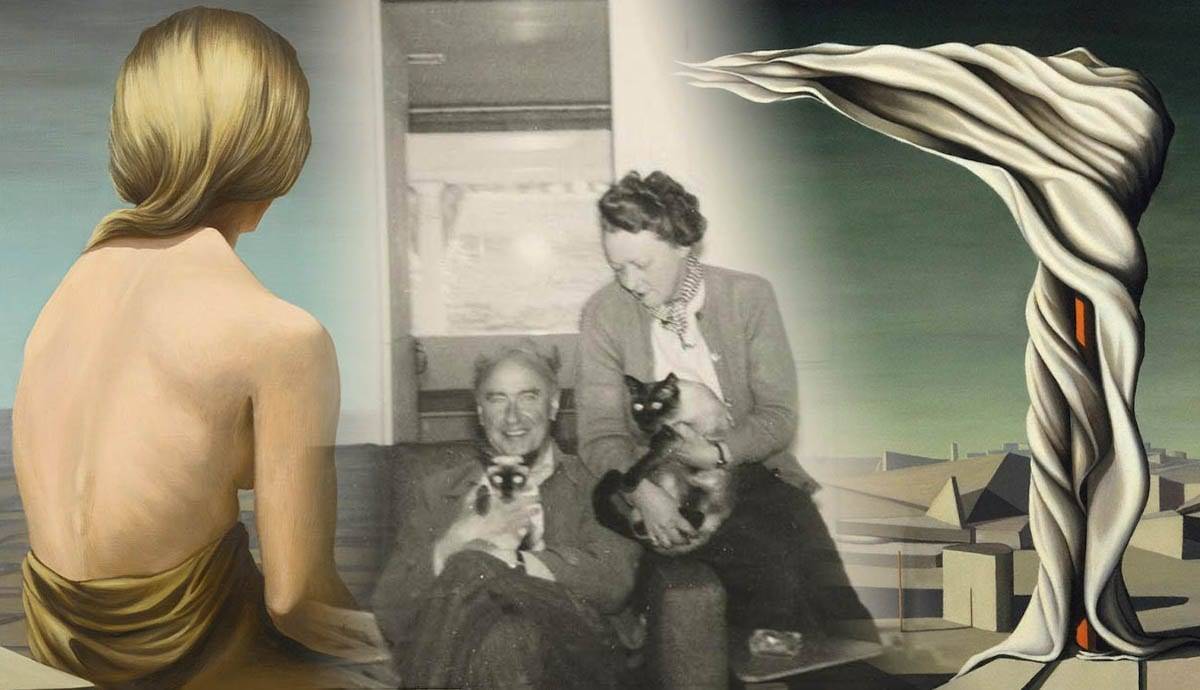 Women surrealists represent a lost chapter of the history of art. Besides Salvador Dali, Rene Magritte, and other famous men surrealists, plenty of formidable women artists practiced Surrealism invisibly but with equal skills. Kay Sage was a surrealist painter and poet, perhaps one of the best-known, yet not famous. She had a remarkable life, helped numerous European artists during World War II escape to the USA and had a spectacular collection of artworks that she later offered to several art institutions.

Kay Sage’s life story carries something glorious, dramatic, and mythical. She was born in 1898 in a prestigious family in New York, a daughter of the businessman and state senator Henry Manning Sage. Her mother, Anne Wheeler Sage, was an eccentric cosmopolitan woman who left the States after her divorce with Kay, still a child, to travel around Europe. Little Kay traveled a lot during her childhood and thus cultivated a broad artistic flair and a non-negotiable sense of freedom. From a very young age, she spoke many languages.

She adopted her mother’s bohemian taste from an early age, which impacted her artistic temperament. Kay Sage had an unquiet mind, seeking shelter in artistic creation. She started drawing and writing poetry when in school. Her decisive artistic pathway, though, began in Rome. She studied painting in the Scuola Libera Delle Belle Arti and joined the Venticinque Della Campagna Romana, a frivolous bohemian group of landscape artists who made excursions outside the city for painting. In this carefree state of mind, she met, fell in love with, and later married the Italian Prince Ranieri di San Faustino.

Although happy initially, the marriage eventually obliged her to neglect her actual life preferences and creativity to follow the royal ways. She was too bohemian and independent to compromise with the prince’s pretentious circle and responsibilities. Her incidental meetings and friendship with the American poet Ezra Pound and the German sculptor Heinz Henghes were catalytic for her life decisions. In 1935, she left the prince, moved to Paris, and devoted herself exclusively to her art.

When Andre Breton and Yves Tanguy attended the Paris’ Salon des Independants in 1938, Kay Sage’s paintings attracted their attention and admiration. They hadn’t heard this name before. They didn’t even know if she was a man or a woman. And this ignorance was a favourable occasion as her gender would later be a somewhat restrictive element regarding her work’s evaluation by the male-dominated art criticism of the time.

Her eventual meeting with the surrealist painters was the beginning of a beautiful friendship –or not always such a beautiful one. She was in her 40s, attractive, wealthy and independent, probably frightful for them. Andre Breton’s slight contempt towards women artists, plus his socialistic idealism, wouldn’t let him accept Kay Sage’s artistic ambition and royal past. The fact that she painted like a man didn’t matter anymore. He never acknowledged her as a surrealist. Yves Tanguy, on the other hand, fell for her – absolutely and irreversibly. They would stay connected forever.

Her interactions with the Surrealists during the end of the 30s transformed Sage’s creative idiom, leading her to a new artistic identity. She even forgot her previous art education declaring later that she was self-taught. Despite Breton’s disapproval, Kay Sage would always consider herself a surrealist painter.

When World War II started, she helped most Surrealist painters of her circle escape from Europe to New York. Using her connections and acquaintances, she founded The Society for the Preservation of European Culture, an organization through which she brought European artists to the USA, organized exhibitions, and promoted surrealist painters. At the same time, she helped many artists and their families financially, including Andre Breton, survive in the States.

Surrealist Painters – His and Hers Surrealism

Sigmund Freud’s interpretation of dreams had a tremendous impact on the arts of the first half of the 20th century. The idea of the repressed unconscious drives that move under our perception of reality, leaving undetectable but crucial traces on its surface, was one of the most critical dynamics that shaped the western artistic practice of the time. Freudian theories laid the foundation for several movements and amongst them was Surrealism.

Surrealist painters and poets, through obscure and dreadful dreamscapes, investigated the mind’s mysterious wastelands and negotiated repressed instincts and unconscious desires. And the times were really hard. Before and after World War II, European artists had to deal with irreparable traumas and anxieties concerning the war, social inequalities, poverty, and threatening technology, as well as the expatriation of many of them.

Yves Tanguy had been already considered a distinguished surrealist member before following Sage to the States, where they finally got married and settled in Connecticut. Kay Sage bought an old colonial manor and transformed the area around it into a landscape reminiscent of Tanguy’s paintings.

Tanguy’s art brought the weight of anxiety and an uncanny feeling of not belonging, his vast deserts and peculiar unidentifiable creatures representing his estrangement sentiment and his rejection of reality.

Kay Sage surged Tanguy’s mysterious and troubled mind and art, the enigmatic sceneries of his thought, with admiration and willingness to stand beside him. Her most productive years were the ones around their encounter and their life together. Tanguy was her strange attractor: a force fatal and creative at the same time.

There is an interesting change of subject in her paintings after meeting the surrealists and Tanguy. There is undoubtedly an influence of the vast Tanguy’s landscapes. But there is also a kind of despair that wasn’t there before. Of course, there was a great war around that time, too much destruction and fear that couldn’t leave her intact.

Her paintings are poetic and blue. Like sceneries for Samuel Beckett plays or dystopian science fiction – sad cartographies of a strange world. She was deeply inspired by Giorgio de Chirico’s shadowy sceneries and enigmatic arrangements. The first painting she had ever bought was de Chirico’s, and his artworks would remain a lifelong reference for her.

Everything seems still and lethargic in Kay’s imagery, like a walk through a post-apocalyptic landscape or a bad premonition. There are mysterious scaffoldings and peculiar buildings, an allure toward architectural paradoxes. Placid anxiety and a feeling like pacing towards a nightmare, but not reaching it. There are peaceful seas and ghostly shipwrecks, lunar sceneries, and obscure humanoid shapes, all in plain light.

The doom is not apparent. Looking at them is like having a disturbing dream; it’s deeper than pure melancholy or gloomy apathy, rather an indiscernible sense of vulnerability and risk.

Kay Sage had a restless personality. She had an anxious mind and she was always on the move. However, her paintings showed a stillness or should we call it – insufferable inertia. Her perpetual life motion when looking at her artworks seems to hide a pursuit of immobility. As if she wanted to rest, but couldn’t find her harbor. Her life had been a wandering, endless search that stopped before Yves Tanguy.

Yves Tanguy was devoted but unbearable. Their meeting in Paris had produced a moderate scandal considering his ex-wife and the affair he had with the collector Peggy Guggenheim before meeting Sage. Despite the artistic dinners and parties that Kay Sage had continuously organized, Yves’ settlement in the rural Woodlands of Connecticut was somewhat lonely and intolerable for him. He reduced his painting time and increased his drinking, ending up regularly drunk and aggressive. He insulted and humiliated Kay Sage in front of their friends. There are testimonies about his violence towards her, his outrageous behavior, and her silent bearing.

Unfortunately Sage, a woman so independent and unstoppable regarding her passions and dispositions, did not escape these internalized patriarchal impositions. She had divorced the prince —because her creativity was damned during their marriage— but could not leave Tanguy despite the fact that he treated her like that. She considered him the love of her life and her primary inspiration. We could assume that all this intensity he was creating between them was twistedly inspirational and addictive for both of them.

He died an alcoholic in 1955, falling out of bed and hitting his head. He was only 55 years old.

After his death, there was no tomorrow for Kay Sage. The first time she tried to kill herself with a pill overdose, she failed. So, she devoted herself to painting and keeping Yves Tanguy’s legacy. She wrote and published his catalog raisonné, and she kept painting until she almost lost her vision. She then mainly focused on her poetry that was alike but also different from her painting. Sad, absurd, and quiet.

Kay Sage had been writing since her youth. If her paintings have titles that sound like poetry, her poetry could describe images she never had made. There are empty rooms with more than one colored door, blackbirds, ivory towers, and blood-stained aprons. There is pure surrealist imagery in there, sometimes harsher or “noisier” than her paintings. There is also color in her poems, more intense or expressive than in her pictures. And sometimes, surprisingly, there is humor.

Some of her poems are mysterious, dark, and enigmatic; others are playful, light and humoresque, adopting the surrealist literature’s mischievous experimental mood.

In her autobiography, she talks about writing as a form of exhibitionism more brutal than painting. However, there is no sight of apparent brutality in her writing. In reality, her poetry keeps the elegance and the mystique of her painting while expressing her incurable loneliness and boredom. The brutality she experiences in writing is rather an inert process of investigating her constant feeling of impotence (possibly because of her gender) or even a slight —or strong— guiltiness towards Tanguy’s end; something we could guess through her self-identification with the blackbird as a symbol of death.

The most frequent motif in her work is the egg. Its symbolic meanings are apparent considering her problems with solitude, estrangement, and captivity in a world that she did not understand. Her egg-self exists with the precious but fragile shell, showing a prison of life and creativity that can hatch or be disparaged by predators. Feeling constantly like a stranger in her environment, which was odd for such a cosmopolitan woman, Kay Sage named her autobiography China Egg.

During the last years of her life, she almost lost her vision entirely and couldn’t paint anymore. She decided to commit suicide, and this was her second attempt. This time, she wouldn’t permit herself to fail. On January 8, 1963, she shot herself in the heart.

In her suicide note, she wrote: “The first painting by Yves that I saw before I knew him, was called ‘I’m Waiting for You.’ I’ve come. Now he’s waiting for me again – I’m on my way.”

By Gelly GryntakiBA Physics, MA Art Conservation, PhD Science & Contemporary ArtI am an art curator, writer and researcher, mother and feminist, reader and translator. I am interested in queer theory and gender performativity, posthumanism, science and science fiction, and artistic activism. I regard contemporary art as a multi-dimensional space where all those fields can intersect and interact. I hold a BA in Physics, an MA in Art Conservation, and a PhD in Science and Contemporary Art. I have collaborated with several institutions, media, and artists and I am a permanent contributor to the Greek issue of The Art Newspaper. Museums and bookshops are my favorite places.