Robert Delaunay was one of the most fascinating painters of the 20th century that pushed abstract art to its limits. 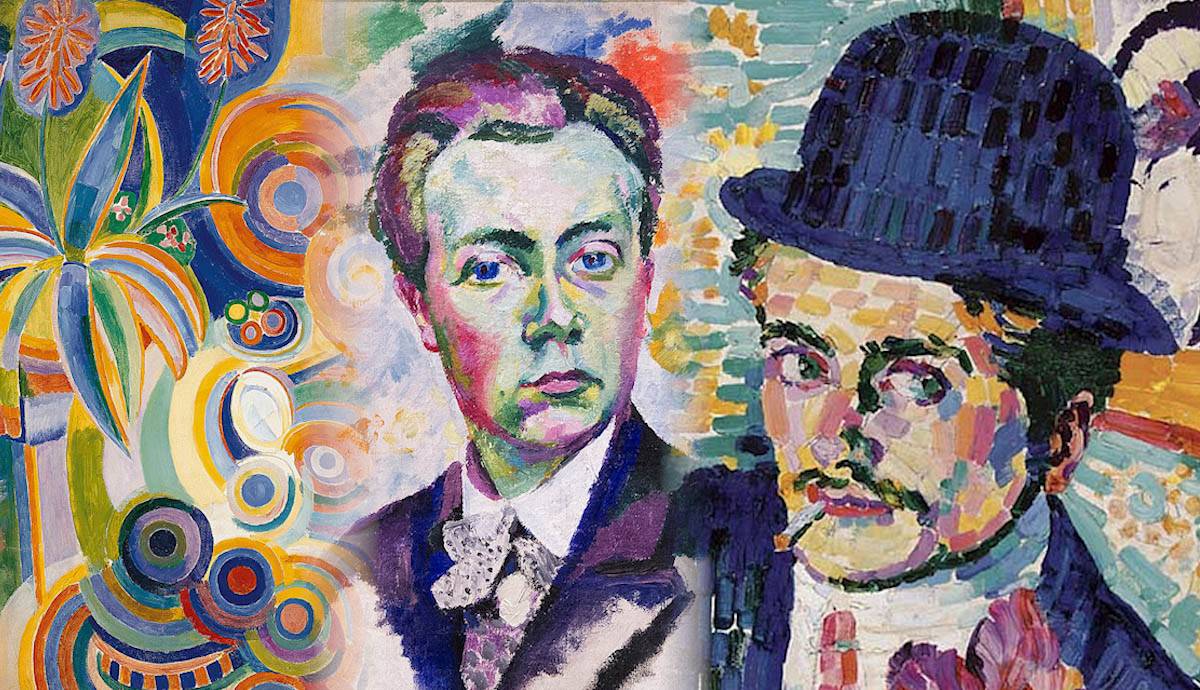 The French artist Robert Delaunay was one of the most influential figures in the 20th-century art world. Not only did he leave a mark on modern painting but he also introduced the concept of color to Cubism. Robert and his wife, Sonia Delaunay, were pioneers of Orphism. Known for bold, vivid colors, various geometric shapes, and concentric circles, their works affected the development of abstract art. Delaunay wanted to introduce a new way of non-representational painting by depicting various shapes, colors, lines, and even emotions. Instead of making something that was more representational and naturalistic, he tried to simplify or exaggerate things in order to make a statement.

Robert Delaunay was born on April 12, 1885, in Paris, France. He was born to a wealthy, upper-class family. However, his parents divorced when he was still young. Thus, he was raised by his uncle and aunt, Charles and Marie Damour. In a similar situation, Delaunay’s future wife, Sonia, was also raised by a wealthy uncle and aunt in Saint Petersburg. She later became his longtime companion both in life and in art. Delaunay attended the Ronsin’s Atelier at Belleville, where he worked for two years for a theatre designer and designed only theatrical sets. After this, he began experimenting with painting. He took inspiration from Paul Gauguin, Henri Rousseau, Georges Seurat, Pablo Picasso, Claude Monet, and Paul Cézanne. These painters played a huge role in his artistic development.

His Early Techniques and Artistic Style

When Robert Delaunay first started painting, he applied dots of color that resembled a mosaic. This technique was known as divisionism. His early works from 1906 were characterized by the systematic use of circular shapes in flat colors. The Delaunays experimented with styles of different movements like Fauvism, Surrealism, Cubism, and Neo-Impressionism. This was before they developed their own style. A new sub-movement became known as Orphism or Simultaneism. At the age of 25, Robert Delaunay was at the height of his career, exhibiting a series of his paintings and gaining a great reputation. As his style matured, he concentrated on painting with vibrant colors in geometric shapes. Delaunay believed that because of the fact that a movement of shapes is constantly interrupted by the effects of light, a painting must be based on the appropriate choice of colors.

Despite the fact that Robert Delaunay expressed talent from an early age, it was only when he met his wife Sonia that he realized that his true passion was art. In 1908, Delaunay met Sonia Terk, who at that time was married to the German critic and gallery owner, Wilhelm Uhde. She came from Russia to attend the Academie de la Palette in Paris and soon became a key figure of the Parisian avant-garde.

For Sonia the marriage with Uhde ensured her stay in France, while for him the marriage became a perfect camouflage for his homosexuality. Delauney was a regular visitor of Uhde’s gallery, so meeting her there was inevitable. Robert and Sonia soon became lovers, and Uhde agreed to a divorce. Robert and Sonia got married in November 1910. Soon after their marriage, they moved to Paris, where Robert developed his distinctive style, using bold colors to highlight the depth and tone of paintings.

Robert Delaney tried to make non-objective abstract art paintings in order to convey a feeling of simplicity using geometric forms. He combined his earlier mosaic style with the geometric deconstruction of Cubism. However, he quickly moved from that cubist manner towards pure abstraction. He wanted to explore the relationship between form and color and create abstract color juxtapositions.

Robert Delaunay, along with his wife Sonia, founded the Orphism movement. It was a subcategory of Cubism with components of Fauvism, which was developed in Paris between 1912 and 1914. His work was admired by the French poet Guillaume Apollinaire, who first invented the term Orphism. The word Orphism derives from Orpheus, who was a figure of Greek mythology, a mystic artist, musician, and painter. Apollinaire first gave the name Orphism to describe the lyricism of the works of Delaunay. Delaunay is considered to be the most important representative of Orphism along with his wife Sonia Delaunay, Frank Kupka, brothers Duchamp and Roger de la Fresnaye.

The characteristics of the Orphism movement include brightly colored works, faceted compositions, color contrasts, and an abstract approach to the subject matter. Delaunay was particularly interested in depicting objects through color, movement, depth, tone, expression, and rhythm of the painting. Although the Orphism movement lasted for only two years until the outbreak of World War I,  it had a strong impact on several artists, including The Blue Rider group of German Expressionists such as Wassily Kandinsky and Franz Marc.

Between 1909 and 1912, Robert Delaunay began producing a series of the Eiffel Tower paintings which established him in the artistic world. In these paintings, Delaunay demonstrated his love for Paris, while also introducing people to Orphism in its most pure expression. The Eiffel Tower became a major motif for artists in recognition of the major role that technological development and innovation had in the first part of the 20th century.

Delaunay painted many depictions of both the Eiffel Tower and Paris as seen from a window, and this geometric composition is like an introduction to abstract art. In the Simultaneous Windows, the outline of the Eiffel Tower appears beyond a window, broken down into a series of colored panes. He created different facets of intense colors, giving an atmospheric character to the work. It’s Delaunay’s typical style of showing how colors can make figures stand out. In the Red Eiffel Tower, Delaunay depicts the tower as a symbol of modern life in a new technologically based metropolis. The rich red color is heightened in contrast to the pale blue background, which again emphasizes the tower’s dominance on the Parisian skyline. His work was described as a synthesis of Impressionism and Cubism but the dynamic forms and plumes of smoke or clouds are more reminiscent of Futurism.

Life in Spain and Portugal

At the beginning of World War I in 1914, Robert and Sonia Delaunay moved to Spain. From there they went to Portugal. During their stay there, they developed friendships with Mexican painter Diego Rivera and Russian composer Igor Stravinsky. Robert Delaunay continued to combine figurative and abstract art elements, exploring the dynamic arrangement of color. He even adopted a new technique by mixing oil with wax to preserve color luminosity.

Delaunay’s stay in Portugal was one of the most productive and colorful periods of his career. The warm sunlight of Madrid and Portugal, the contrasts of splashes of color in the women’s dresses, the colorful markets, and the dream-like atmosphere inspired both artists. In 1920, the Delaunays returned to Paris, where they continued to create abstract art with vibrant colored geometric shapes and designs. After experimenting with different styles, from mosaic paintings to the Eiffel Tower series, Robert started to incorporate circles, rings, disks, and curved colored bands into his paintings. By painting circles in different colors, the artist wanted to show the cycle of human life, in which a man evolves from child to old man.

The International Exhibition of 1937 turned out to be an amazing experience for the famous couple. The Delaunays were commissioned to create large murals to adorn the sculpture hall of the Salon des Tuileries. For this work, Delaunays drew inspiration from airplane propellers, swirls, and plumes, creating a powerful illusion of constant motion. The Rhythm n.1 painting is one of these murals. It expresses a rhythmic variation through bright colors and repeated geometric patterns. Robert Delaunay’s approach was following the spirit of technological progress. In 1939, these monumental compositions were exhibited at the first Salon of Abstract Art at Galerie Charpentier.

The Legacy of Robert Delaunay

By 1941, Robert Delaunay was already diagnosed with cancer. He passed away on October 25, 1941, in Montpellier, France. Today, Delaunay’s paintings can be found in the most notable museums and private art galleries around the world. The artist has been credited for bringing color to Cubism and inspiring young artists to look for new directions in art. He certainly left his mark on the history of abstract art.

For more than 30 years, Sonia and Robert have been partners in life and art. They became one of the most notable artistic couples in art history. After the death of Robert, Sonia devoted herself entirely to preserving and promoting her husband’s legacy. She lived for another 38 years and continued to organize exhibitions of Robert Delaunay’s works while creating new paintings and designing textiles. The legacy of Robert and Sonia Delaunay proves that their ideas are still relevant even today, with their color combinations and geometric shapes being as appealing as ever. Their effusiveness for art and color has had a lasting appeal.