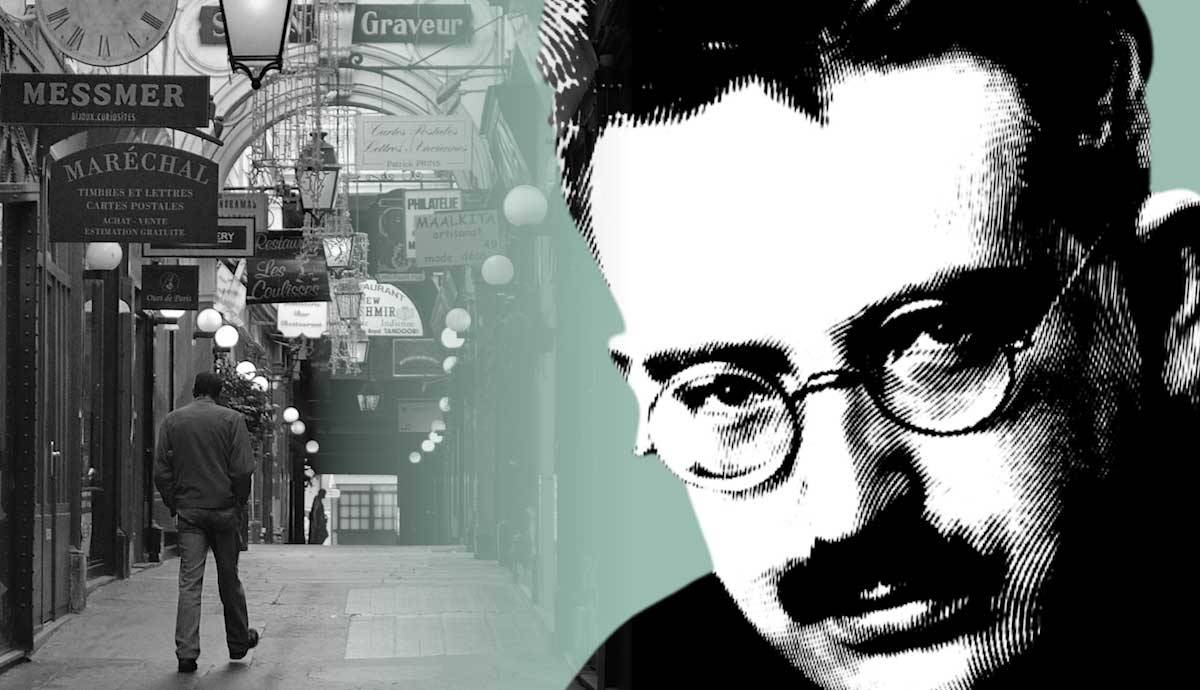 The Arcades Project is not a finished text. What survives of Benjamin’s work on the book is bundled into headings and drafts: a mixture of quotes, aphorisms, and longer sections. Left in this state – somewhere between a plan, an encyclopedia, and a ruin – at the time of Benjamin’s death, the Arcades Project maps the strands of the philosopher’s thinking about modernity, poetry, and commerce in Paris’s arcades. Alternating between Benjamin’s own words and a choir of other voices, the text describes the rich, technicolor novelties of industrial production: exotic clothing, art nouveau ironwork, and electrical devices. In the text’s many echoes and repetitions, Benjamin seeks to understand the source of these objects’ captivating appeal, and the political implications of the wave of novelty washing over the twentieth century.

The Arcades Project is a cluster of obsessions. Obsessions that run through Benjamin’s writings, seeming at times to be closely connected to one another, at others to merely be drifting in the same expansive mind. It is hard to identify the edges between obsessions; Benjamin is fascinated by commodities – combs, scarves, hats, artworks, sex – and their mass production, but he is also very specifically fascinated by Paris’s arcades, their iron and glass canopies. Poets and philosophers crop up again and again (Fourier, Marx, Baudelaire) and seem to congeal into a single thread of commerce and fetishes, materials and theology.

The structure of the text lets us in on the nature of these obsessions, scattered notes seem to repeat names, phrases, and images despite different contexts and headings. Whatever dazzling, distracting quality Benjamin finds in objects on display in the arcades is also found in certain quotes and ideas, drawing him back. World exhibitions, snatches of Apollinaire, Fourier’s impossible dreams of conquering nature, and the Parisian prostitute are all woven into the maximalist dreamscape of the arcades.

‘It is one and the same historical night at the onset of which the owl of Minerva (with Hegel) begins its flight and Eros (with Baudelaire) lingers before the empty pallet, torch extinguished, dreaming of bygone embraces.’
(Arcades: J67, 3)

Materialism and Eros find their culmination and meeting point in Paris’s arcades: where commodities are enhanced with the seductive glow of living beings and living beings – from processions of shoppers to the prostitutes of Paris – glitter with the sheen of rare commodities.

What is Commodity Fetishism?

In attempting to explain the importance and allure of the arcades, their spectacular as well as their economic power, Benjamin repeatedly refers to Marx’s notion of the commodity fetish. The idea of the fetish is significant for Benjamin because it explains why the arcades’ treasures, and the objects of industrial-capitalist production more generally, are so novel and so captivating, when conventional Marxist ideas of value fail to explain their quasi-magical powers. If the sustaining enthusiasm of industrial capitalism is to be understood, it must be understood not only as a function of economic interests, but also of psychological effects.

It is worth, in the course of explaining what the commodity fetish means, returning to Freud’s discussions of fetishism, and their emphasis on displacement. Fetishism for Freud begins not merely as an obsession but as the displacement of another obsession, a relocation of the erotic energy of one object of desire to a new one – one unrelated to the cause of desire. While in Freud this displacement is always sexual in character – the analysand substituting some body part or inanimate object for the true, Oedipal object of desire: the mother – in Marx the displacement character of the fetish becomes useful in explaining how we perceive value in commodities.

For Marx the substitution is of the commodity for the social and labor relations that produced it. In other words, the comb that we might fetishize is invested with the significance and animation of the laborer who worked to produce it. In the fetish, however, we forget this social character of the object, and the labor invested into its production, and treat the value of the object as inherent to it. Marx famously proposes three kinds of value: ‘use-value’, ‘exchange-value’, and simply ‘value’, but all these refer to ways in which commodities relate to people. In short, whereas value is always actually social in character, commodity fetishism describes the process by which we perceive value as innate, pre-social, and almost divine – the commodity’s ‘theological niceties.’

Commodities possess a use-value derived from practical utility, the comb’s usefulness for tidying and untangling one’s hair, as well as an exchange-value – what people are willing to pay for a given object – but most crucially to the commodity fetish, there is the value produced in an object by the time involved in producing it. This time, what Marx refers to as ‘socially necessary labor time’, involves all kinds of social relations between workers, employers, colleagues, and so on.

Fetishism in the Arcades Project

Nowhere is this detachment between the social relations of production and exchange, and the physical commodity clearer than in the arcades. Like the world exhibitions which appear time and time again in the Arcades Project, the arcades themselves mingle natural rarities and luxuries with artificial ones, and artificial emulations of organic ones. No distinction, therefore, presents itself between objects invested with socially necessary labor time, and objects discovered in their saleable state. In the arcade, these distinctions dissolve under a broader umbrella of artificiality. The phantasmagoria of the arcades is sustained by their enclosure and distance from grubby streets. The laborers who produce these objects and the materials from which they, and the arcades themselves, are constructed are cast out of sight.

Clothes and lithographs in the arcades are cut off from labor more effectively than in the small village shop, where objects are still obviously in thrall to social relations. In the shops and covered streets of Paris, under unwavering lamplight, Benjamin notices that inanimate objects seem to come to life for the shopper-onlooker, animated by fetishism rather than by real social and labor relations. ‘Combs swim about, frog-green and coral-red, as in an aquarium’ (Arcades, 1927 draft); in images like these, and countless quotes, Benjamin paints the arcades as a perfect seduction, the ultimate capitalist dreamscape.

The Arcades Project’s visions of artifice, excess, and seduction vacillate between fantasy and nightmare. In one moment, the image of Saturn’s rings as an iron balcony appears as a kind of fin-de-siècle fairy-tale, the next it represents total colonization by industrial capitalism. This ambivalence pervades Benjamin’s writings about modernity. While many of the other thinkers associated with the Frankfurt School straightforwardly denounce the effects of industrialized mass production on culture – most notably Theodor Adorno in his The Culture Industry – Benjamin succumbs explicitly to the attraction of modern media and products, even as he worries about their possible consequences.

Benjamin’s famous exegesis of Paul Klee’s Angelus Novus unfolds a comforting Marxist determinism of progress (‘a storm is blowing from Paradise; it has got caught in his wings with such violence that the angel can no longer close them. […] This storm is what we call progress.’, Theses on the Philosophy of History). However, texts like The Work of Art in the Age of Mechanical Reproduction, ‘Little History of Photography’, and the Arcades’ remarks on film all present a less sure-footed view of modernity and the future.

In these texts, Benjamin considers the significance of industrial mass production and distribution for all manner of political projects, including fascist ones. The Arcades Project is concerned above all with the ways in which the arcades of Paris construct self-contained, wholly artificial worlds: ‘the arcade is a city, a world in miniature, in which customers will find everything they need.’ (Arcades, 1928-29 draft.)

These little worlds of glass and iron undoubtedly resembled, for Benjamin, Fourier’s socialist phalansteries, but were in fact sites of capitalism’s explosive expansion, underpinned by the unseen labor of the city’s outskirts. The arcades, in short, are both a political hope and a terrible danger. Like film and lithography, the arcades’ seductive power is politically indifferent, an accelerating material drive at the mercy of fashion. This drive is utopian in structure – seeking to make the world anew in its own materials – but mercenary in its political allegiance.

The storm of progress may well be blowing, but in the lingering confusion of Benjamin’s fragmentary text – its obsessions that might yet weave together into some single tapestry or fall apart on the floor – it hasn’t yet progressed further. The movement of dialectical history seems, as Benjamin refers to several times in the text, to be at a standstill, and has not yet resolved into some definite direction, or at least no more clearly than it was for Benjamin as he walked the interior cities of Paris. As Fredric Jameson’s The Benjamin Files (2020) concludes: ‘This is not a happy ending, but it is not the end of history either.’