HomeAnswersWhat Is the Meaning Behind Edward Hopper’s Nighthawks?

What Is the Meaning Behind Edward Hopper’s Nighthawks? 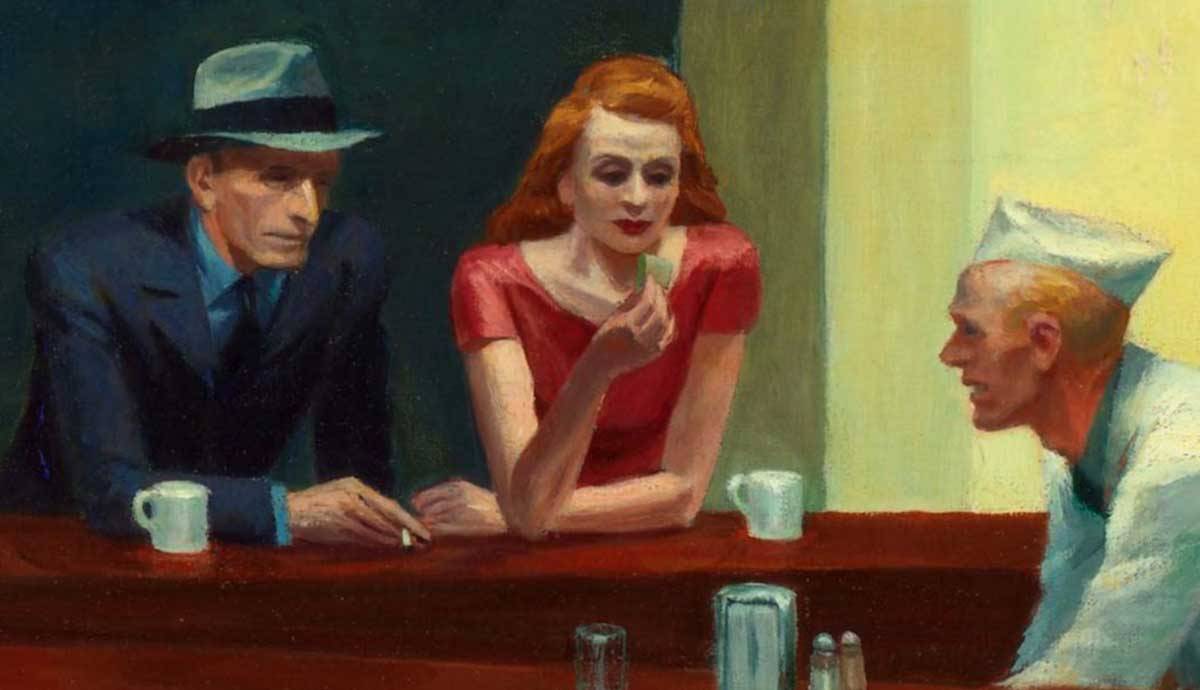 Edward Hopper’s brooding, enigmatic painting titled Nighthawks captured a snapshot of 20th century American life like never before. Four late-night city dwellers hang around in a New York city diner in the small hours, while the streets around them sit strangely silent and empty. Fluorescent strip lighting casts long shadows into the darkness around them, lending the scene an eerie air of melancholia. The painting is an iconic emblem of modern, urbanized life in war-time America. Let’s take a closer look through the key ideas that informed Hopper’s 20th century masterpiece.

In Nighthawks, Hopper sets four very different figures in his late-night diner. Each one in turn seems to be dealing with their own feelings of loneliness and isolation. The man working behind the bar is physically separated from the customers by the long wooden bar, but he is also evidently the only one at work. Meanwhile, the woman dressed in red is the only female present, and her arms form a physical barrier around her, while a man, possibly unknown to her, leans in to try and get her attention. The other man sits opposite them, his back facing towards us and shoulders defensively hunched. Thus, each figure, although grouped together, faces their own internal realm of existential angst. The desolate, empty streets around them only reinforce this quality of quiet unease.

Much like the French Impressionists made paintings of figures set in cafes, bars and restaurants in response to the rise in Parisian urbanism, Hopper’s Nighthawks is also a response to the urbanization and development of New York City. Throughout the early 20th century New York expanded and became a bustling city center with a whole wealth of new opportunities. And as the Impressionists observed, industrialized environments were a mixed blessing. On the one hand, modern cities were vast playgrounds filled with an abundance of jobs and leisure pursuits. Yet they were also gritty and dangerous, with ruthless employers and landlords who were ready to exploit the poorest and most deprived. Hopper hints at both these conflicting qualities in Nighthawks, which tinges an atmosphere of anticipatory excitement with brimming unease.

Hopper situates all his Nighthawks figures behind a long, large glass window, like merchandise on display in a shop front. They carry on their lives as if completely unaware that they are being watched, and this lends the painting a Hitchcockian quality of voyeurism. Except rather than us watching a voyeur spy on someone, we become the voyeurs, looking on as these isolated people hang around in silent desperation. Hopper does not paint any escape route or exit to the diner, so these characters are forever trapped behind a wall of glass to be ogled at and talked about.

It is important to note that Hopper painted Nighthawks two years after the outbreak of World War II. This wider context undoubtedly informed its atmosphere. In particular, Hopper deliberately inflects Nighthawks with the uneasy feelings of dislocation that came about across much of society as a result of war. Hopper draws us to war’s dwindling effect on the population by emphasizing the empty streets beyond the diner. The small group of people in the diner, sitting apart from one another could also be a metaphor for the alienating and isolating effects of war, which removed the structures and beliefs that had once held society in place.

As much as Nighthawks was a response to urbanization and the devastation of war, we can also read this painting as a quiet scene of internal contemplation. Each figure looks down or faces away from us, considering their individual place in the world. This reflects the growing trend of Existentialist philosophy which was becoming popular across Europe and the United States in the mid-20th century. We see similar qualities of introspection and self-reflection in many of Hopper’s paintings, such as Automat, 1927, and Moving Sun, 1952.

Edward Hopper: Get To Know The King Of American Realism In 15 Facts