Regarded as one of the great Finnish artists at the turn of the 20th century, Ellen Thesleff seems forgotten by contemporary art history. 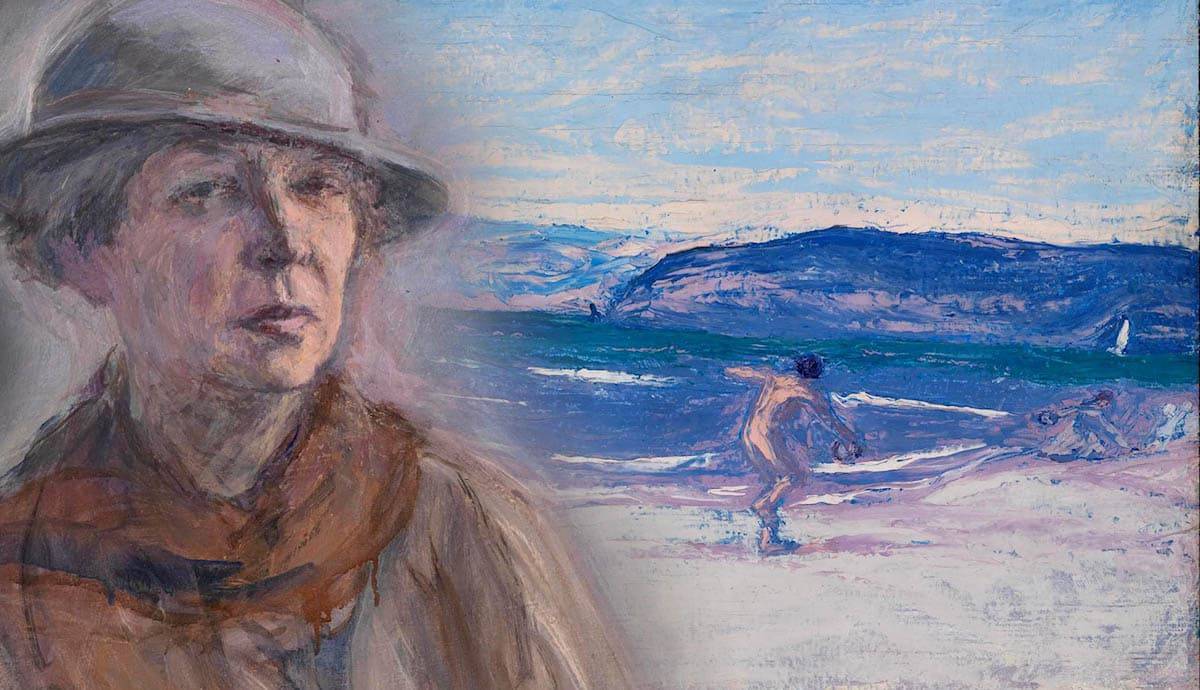 Despite being considered one of the leading artists of the Golden Age of Finnish art and one of Finland’s earliest Symbolist and Expressionist artists, Ellen Thesleff, is not a familiar name in European art history. Being a master at capturing color, light, and movement, she showed skill and versatility in all aspects of artistic creation. A woman who achieved widespread acclaim already during her lifetime was a cosmopolitan by nature, being equally known at home in Finland, France, and Italy. Considering her treatment of color, her pioneering woodcut techniques in Finland, and gradually evolving her art to a point nearing pure abstraction, Thesleff was a groundbreaking artist.

Ellen Thesleff was born on October 5th, 1869, in Helsinki to an upper-class Swedish-speaking family known for leading a bohemian lifestyle. This lifestyle enabled and encouraged Ellen to pursue an artistic career with the unconditional support of her parents and siblings. Ellen’s brother, Rolf, provided her with business advice and handled sales and commissions. Her sister, Gerda, a physiotherapist who never married, ran the household and took care of daily errands on her behalf. Her sister Thyra’s four daughters also played an important role in her life.

Devoid of conventional gender constraints, Ellen began her studies at the age of 16. From 1885 to 1887, she studied at the Adolf von Becker Academy in Helsinki and spent a part of 1887 at the Finnish Art Society’s Drawing School, which later became the Finnish Academy of Fine Arts. As her interest in art started early, so did her travels.

In 1888, she went on a Grand Tour of Europe with her father. This tour was considered essential to a well-rounded education. After returning to Finland, she studied under Gunnar Berndtson and finally made her debut and met with critical acclaim with the painting Echo in 1891.

Ellen Tesleff traveled to Paris in 1891 in order to further her studies at the Academie Colarossi. During her stay, a new movement in art was taking over Paris: Symbolism. Young artists started questioning prevailing notions of art and infused their work with elements of mysticism and spiritual introspection. Symbolist art emphasized the artist’s subjective experience of reality. A young art student like Thesleff needed only to socialize with peers in studios or cafés to come in contact with this movement. Thesleff painted and spent time with Magnus Enckell, her former classmate from Finland, who had close ties to the movement and its literature.

The peak of Thesleff’s Symbolist period is her Self-Portrait, created between 1894 and 1895. The small-scale artwork made with pencil and sepia ink is considered a masterpiece of the Golden Age of Finnish art. This self-portrait, with a pale face emerging from the darkness of the background, was highly regarded even at the time of its creation. It epitomizes the attitude of inwardness, characteristic of Symbolist art at the turn of the century.

Ellen Thesleff continued her travels in 1894 and went to Florence, a city admired by Finnish artists. From the early 1900s, her visits to Italy became longer and more frequent. In Italy, Thesleff turned from Symbolism to Expressionism. In 1904 while visiting Munich, she was introduced to the works of Wassily Kandinsky’s group Phalanx. This made her consider using pure, bright colors in her paintings.

Her new style shows the use of lively colors and vivid portrayal of the human figure in motion, a forceful treatment of form, and thick layers of paint. Ellen worked on smaller-scale canvases, which enabled her to paint in nature. Thesleff loved to roam the hills around Florence and walk by the banks of river Arno, preferring to paint in the morning or late in the evening. Sunlight and mist enveloping the landscape, giving it a radiant glow, is a major characteristic of her work at the beginning of the 20th century.

Forte dei Marmi, a spa town near Florence, offered Ellen Thesleff a perfect opportunity to live out the principles of vitalism and connect with nature. Her paintings in this period portray people in motion and their interaction with their surroundings. In 1907, Thesleff met Edward Gordon Craig, who became her artistic mentor. Craig’s theories and theater projects greatly influenced her woodcuts. They collaborated at the School of Theatrical Design at the Arena Goldoni theater. Thesleff also traveled to Florence in the 1920s and 1930s, her last visit being in spring 1939.

Murole: In the Center of Finland

Murole, a village in the Ruovesi district of northern Tavastia, served as a secluded refuge where Thesleff painted undisturbed in the company of her siblings and parents. From her early career, the scenery of Murole is easily recognizable in many of her paintings. Thesleff stayed first in the family villa but later moved to her own studio named Casa Bianca, or “the white house” (demolished in the 1960s). Even though lonely wanderings were not considered a suitable pastime for a young woman, Ellen loved roaming the woodlands, fields, and meadows around the village. She was known for rowing a boat to an island in a middle of a nearby lake, where she had many plein air sessions.

Ellen’s interaction with the locals was limited to when Ellen used them as models. The only friend she had in Murole was Sophie von Kraemer, the mistress of a nearby Pekkala manor. This friendship brought some work Ellen’s way. In 1928, Hans Aminoff, the master of Pekkala, commissioned Thesleff to paint murals for the new part of the mansion. Another commission she had in Murole was the altarpiece for the new local church. Thesleff painted two scenes of the Birth of Jesus, but both of these works were rejected.

After the death of her sister Gerda in 1939, Ellen spent most of her time in Murole alone, visiting it probably for the last time in 1949.

Ellen Thesleff did spend a lot of time traveling across Europe, but Helsinki always remained her home. The only scenes she painted of her hometown mainly were immediately near where she lived. Her apartment was situated near the harbor and Market Square in Helsinki. Especially during autumn, the Scandinavian city offered a contrasting experience from the lively streets of Florence since most people stayed at home to escape the cold.

The painting Helsinki Harbor gives a unique interpretation of the city bathed in summer light, with a silhouette of the Helsinki Cathedral. Thin and vertical strokes look as if they had been carved into a block of wood, which shows that Thesleff considered woodcuts of equal importance to painting.

In Finland, next to Helene Schjerfbeck, Thesleff was the only established female artist in the 1920s. In the 1930s, however, women artists began gaining gradual recognition. The Finnish art scene had a busy calendar, and Ellen continually exhibited her art, which once again turned to fantasy and dream-like scenes of her Symbolist period. Her last years were spent in Helsinki, living at Lallukka Artists’ Home, where she was offered a studio in 1933.

The early 1940s marked a grim period for Ellen Thesleff. Besides the beginning of the Second World War, her sister Gerda, with whom she lived, died in the autumn of 1939. She continually fled bombings in Helsinki during the war but eventually resumed her work at the Lallukka artists’ residence.

Being in her seventies in 1943, Thesleff received an invitation to exhibit as an honorary guest at the annual Young Artists exhibition at Kunsthalle Helsinki. This invitation shows the significance and popularity she enjoyed among younger artists. In one of her letters about the exhibition, Ellen writes: “They called me the youngest, a pioneer.” Thesleff continued creating art well into the 1940s, showing that she was still creatively sharp. Works from her late career show the development of a new radical non-representational style, coming almost to complete abstraction. These compositions were built with rhythmic brushstrokes and color returning to their main role. During this period, Thesleff’s view of her work is best described in one of her letters to Elisabeth Soderhjelm. In it, she writes:

“I can certainly say that I have painted. I once thought I could fill the shoes of a northern Leonardo – then other days, I’m not quite so self-assured.”

Ellen Thesleff as a Woman in the Art World

The artistic profession forced Thesleff to hold the balance between expectations and restrictions from her gender, professional goals, and personal desires. She had a firm idea of herself as an artist and creative genius. Aware of her abilities and talents, Thesleff refused to make concessions regarding the content of her work. Deciding to be an artist had obvious consequences for her private life. Like many women artists in Finland at that time, Ellen never married. Even further, she believed that solitude was part of creative work and a sign of a strong ego. She held to this belief so firmly that she even refused to take on students if not in financial straits.

In Finland, women were free to pursue an artistic career but were still defined by political and social circumstances. After establishing an independent country in 1917, the demand to create national art in Finland grew but did not apply to women. In that case, women, including Thesleff, took a more open-minded view of modernist trends. As we have seen with Thesleff, they were free to experiment with styles, forms, and techniques. Before passing away in 1954 at the age of 84, Ellen Thesleff established herself as one of the boldest and most innovative Finnish artists of the first half of the 20th century.