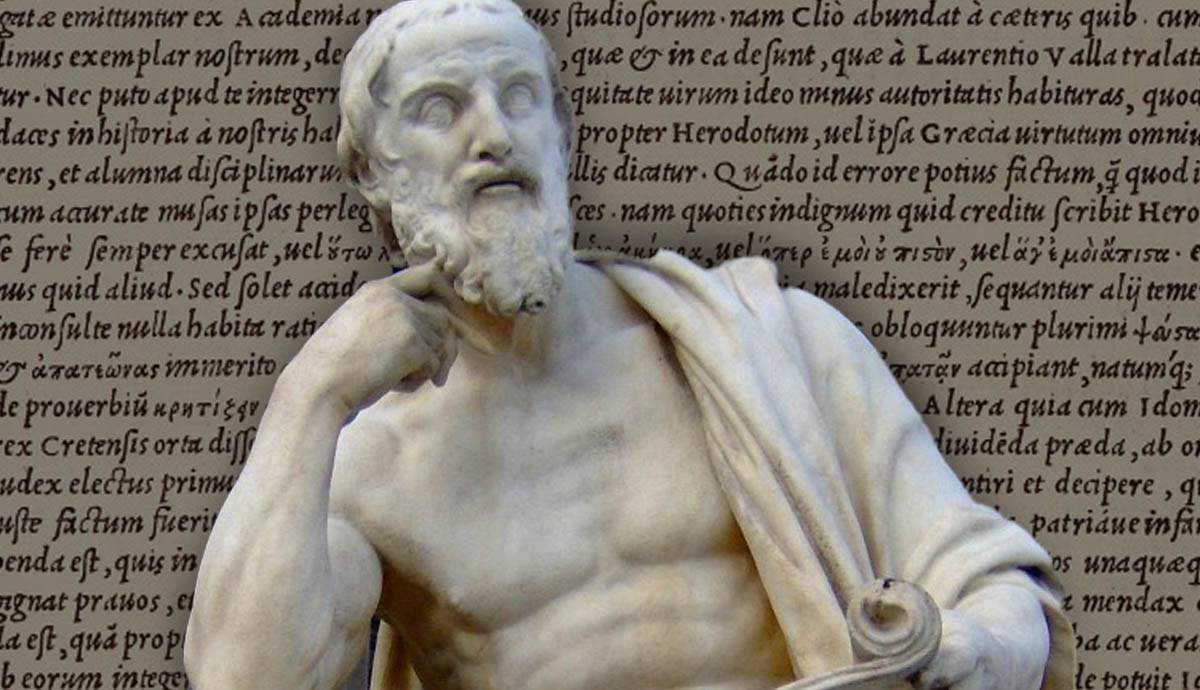 Herodotus was a phenomenally ambitious writer and geographer from ancient Greece, who invented the entire field of history. Roman writer and orator Marcus Tullius Cicero even called him the “father of history.” But Herodotus was also a great storyteller, a powerful narrator who could weave together stories so compelling that many doubted their truth. This prompted the Greek-Roman philosopher Plutarch to call him the “father of lies.” Let’s take a closer look at some of the facts surrounding the life of this historically monumental figure, and separate fact from fiction.

1. Herodotus was a Greek Writer and Geographer

Born in around 404 BCE in the city of Halicarnassus, Herodotus had an insatiable curiosity about the world from a young age. As an adult he travelled widely around the eastern Mediterranean and beyond. He went from Greece to Persia, Egypt and Scythia, along the rivers of Lydia to Sparta, researching human civilizations and historical events. And he was the very first to record his findings in a series of nine books titled The Histories. He covered a broad range of facts, including the lives of prominent kings, famous battles, and ethnographical and geographical backgrounds.

2. Herodotus Is the Father of History

The importance of Herodotus’ Histories cannot be understated. They were so significant that Cicero and many others have since called him the “father of history.” It wasn’t just the extent and range of his historical research that earned him so much respect. It was also the way he brought it all together in a chronological sequence, which no one had ever done before. Before Herodotus, written volumes tended to mesh historical events with the stories of Greek gods and mythological characters. Real history tended to be part of local, spoken family traditions, rather than published books.

3. Some Call Him the Father of Lies

There’s no doubt that Herodotus was a great storyteller, with an innate ability to weave compelling narratives. This meant that in later centuries, he was sometimes criticized and accused of making things up. Renaissance writer Plutarch scoffed at Herodotus’ research, dubbing him the “father of lies.” Others have suggested he brought in “legends and fanciful accounts” to his stories to make them more entertaining to read. But more recently, modern historians and archaeologists have verified quite a large amount of Herodotus’ fact-finding, making his work all the more remarkable.

4. He Recited His Historical Findings to Audiences

It’s hard to imagine today, with information at the tip of our fingers, but for Herodotus to spread his findings far and wide, he actually performed a series of recitals or “performance pieces” related to The Histories. This was a common practice for writers of the time – we might think of these as an early form of self-promotion or advertising. Incredibly, Herodotus even recited his entire Histories book to an audience during the Olympic Games, followed by rapturous applause! A young Thucydides, who would later become a leading writer and historian, was in the audience with his father. Legend has it, Thucydides was so moved he burst into tears. This prompted Herodotus to tell his father, “Your son’s soul years for knowledge.”

5. Herodotus Was a Philosopher

More than just a documentation of history, Herodotus’ The Histories was a great work of philosophical research. Contemporary historian Barry S. Strauss writes how Herodotus explored three philosophical themes related to the nature of society in The Histories. He argues these were “the struggle between East and West,” “the power of liberty”, and “the rise and fall of empires.” But above all else, Strauss argues it was the way Herodotus could really tell a story that became his greatest gift to history and philosophy. Strauss writes of Herodotus: “the sheer narrative power of his writing … keeps calling us back.”

The 6 Most Important Greek Gods You Should Know