Why Did Jeff Koons Make a Giant Puppy? 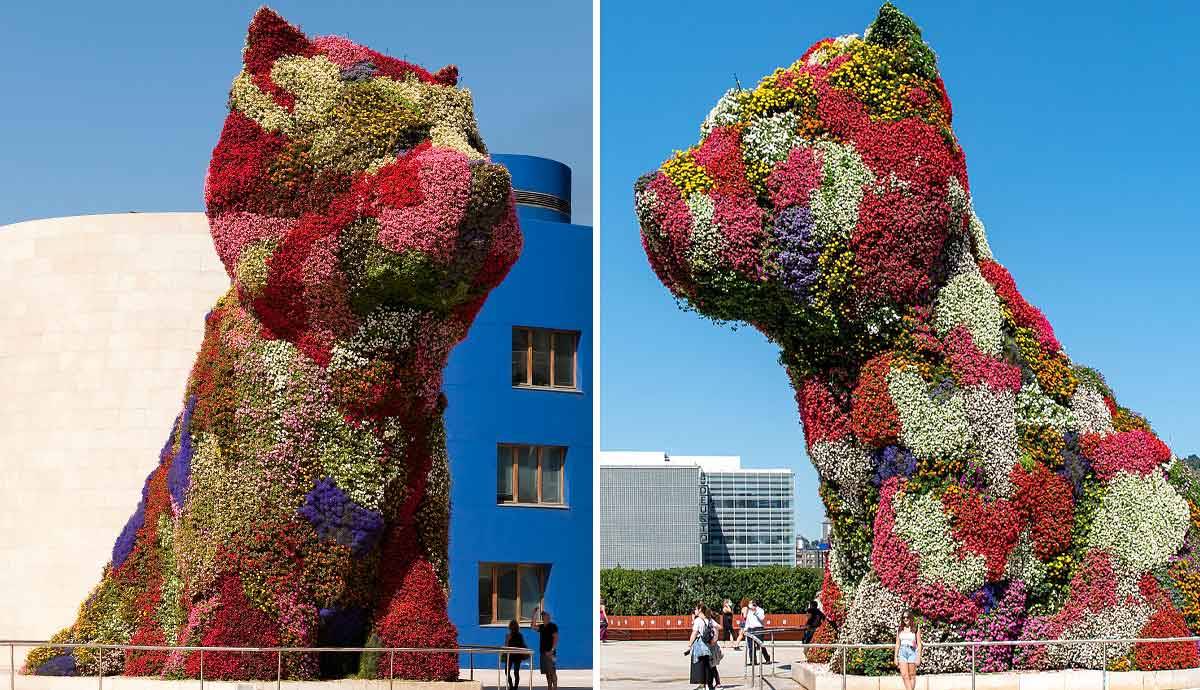 The undisputable king of kitsch, American Neo-Pop artist Jeff Koons has been making his blockbuster art for the past five decades. From large scale public artworks to monumental photorealist masterworks, epic balloon dogs and bunnies, and grotesquely oversized ornaments, Jeff Koons has mastered the art of making a big, bombastic statement by replicating simulations of objects and imagery from everyday popular culture. One of his best-known artworks is his giant, 43-foot-tall terrier Puppy, 1992, made of plants and flowers, and now situated outside the Guggenheim Museum in Bilbao, Spain. But why did he make it? In Koons’ own words, the ultimate aim of the artwork was to instill feelings of “confidence and security.” Read on to find out more.

Ultimately, Koons made his Puppy with the goal of appealing to as wide an audience as possible. Both the puppy emblem and the flowers are universally appealing subjects that the artist chose to deliberately make viewers feel happy and at ease. Koons chose the breed of puppy – a West Highland terrier – because he believed it was a neutral dog with neither male nor female connotations, that most people would enjoy looking at. His terrier also has a timeless, ageless quality that could be from any era. He said, “A West Highland terrier seems neutral… which is good, because I don’t want anyone in the audience to feel alienated.” He also selected topiary for its universal appeal across all strata of society, from those who enjoy large manicured gardens to owners of small backyards.

A Blend of Old and New

One of the most fascinating aspects of Koons’ Puppy is its succinct blend of old and new. The technology required to design the puppy is undoubtedly a symbol of modern engineering. So much so, Koons once commented in an interview, “Puppy is a shelter. It’s built out of stainless steel. It’s like the fuselage of an airplane. You could live inside it.”

Meanwhile, the topiary and flowers that Koons has introduced makes a nod towards 18th century formal gardens, which had to be trimmed and maintained on a regular basis by a gardener to maintain their neat structure. They therefore became status symbols for their owners, displaying their wealth to family, friends and neighbors. Koons has often made reference to historical symbols of wealth and status in his art, which act as a precursor for today’s materialistic, capitalist society. And much like 18th century gardens, Koons’ Puppy requires ongoing maintenance. As well as being frequently trimmed, twice a year the plants and flowers need to be replaced for seasonal varieties. This means Puppy can look quite different depending on the time of year.

A Play on Kitsch Emblems

As much as puppies and flowers have a universal mass appeal, they also have a kitsch, saccharine quality which Koons has deliberately ramped up for theatrical effect. As in many of his works of Neo Pop Art, Koons titillates the viewer by grossly exaggerating the sentimental appeal of these motifs to the point where they become almost ridiculous in their camp grandiosity. Because of this, there is an underlying humor in his Puppy, tinged with just a hint of irony.

An Analogue of Contemporary Culture

Many art historians see Koons’ Puppy as a metaphor for contemporary society and culture at large. Its colossal size might be almost unmanageably large and could easily spiral out of control. But, much like modern society, by being controlled and contained, Puppy stands tall and proud, blooming forth the most vibrant and brilliantly colored flashes of inspirational color and life. The artwork may also be a symbol of our human interaction with nature, and the ways we can harness its beauty while keeping it very much alive. Reflecting on these many meanings, Koons says of the artwork, “It’s a very spiritual piece.”