The story of Yasuke, a figure of legend from one of Japan's most turbulent periods and the first recorded foreigner to be awarded the position of Samurai. 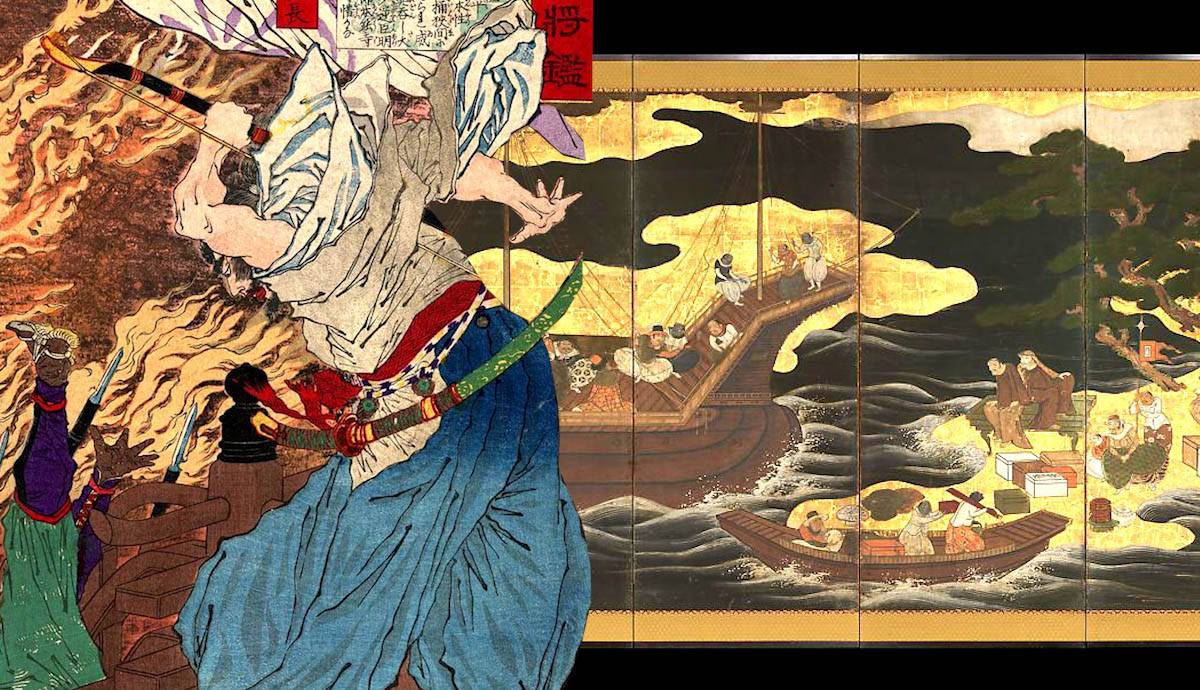 Arriving on the shores of Japan in 1579, during an era of strife and war, a black slave to Portuguese Jesuit monks would rise through the ranks to become a figure of legend. Remembered only by his Japanese name, Yasuke would find himself at the side of one of Japan’s most famous historical figures, Oda Nobunaga, the Demon King. So great was the Warlord’s trust in his African samurai retainer that he was one of only a handful at his side when he was assassinated in 1582 at the Honnō-ji temple.

Despite his legendary status, there are surprisingly few records available relating to Yasuke and, as such, much of his life remains unknown even today. While no one is certain of his ethnicity, Jesuit records that were written decades later say he was likely from Mozambique, though without any evidence. Others suggest that he was of the Jaang, or Dinka people of Sudan who are well known for their dark complexions, great height, and martial prowess, all of which Yasuke was said to have possessed.

It was with the Italian Jesuit missionary Alessandro Valignano that Yasuke would find himself brought to Japan. Accounts differ on whether or not he was a slave to the Jesuit or, rather, a freed servant or even a bodyguard. Regardless, his arrival in Japan proved immediately noteworthy to locals, as foreigners from Africa were considered to be immensely rare and exotic, even compared to their white European counterparts.

Introduction to the Demon King

It would not be until 1581, when Valignano and his entourage departed for the capital of Kyoto, that the legend of the African samurai would truly begin. During this time Kyoto was under the control of one of Japan’s most famous historical figures and first great unifier: Oda Nobunaga. Known as the Demon King for his exceptional prowess in war and strategy during the Sengoku Jidai. Following decades of warfare, Nobunaga had risen in both power and prestige, becoming the most powerful warlord and de facto leader of Japan by 1581.

When presented to Nobunaga by the Jesuit envoys, the warlord could not believe his eyes, having never seen a black man before. Thinking that the man before him was dyed with ink, he requested that Yasuke strip to the waist and scrub his skin. Proving that this was no trick Nobunaga took an immediate and deep interest in the foreigner, gifting him with a sum of money at the end of their first encounter.

Legend of the African Samurai & Friend of the Demon King

While Nobunaga was known as an eccentric when it came to foreign curiosities and style, it was more than a shallow interest that would allow Yasuke to prosper in Japan. Already possessing an understanding of the Japanese language, Yasuke was seen by Nobunaga to be a fine conversationalist and the two were often seen talking together alone or in the company of others. Furthermore, the men shared a great interest in the arts including dance and musical drama. More than anything Nobunaga preferred to surround himself with intelligent, well-disciplined people regardless of class. The fact that Yasuke was one of the few people allowed to regularly dine with him shows how highly he regarded his companion.

It would not take long for Nobunaga to request that Yasuke join his retinue, in service to him as a samurai. Japan had never before seen a foreigner being granted this position and, considering the emphasis that their culture placed on honor and merit, it is highly unlikely that this was due to nepotism alone. While Yasuke was considered to be a giant of great strength there is no chance at all that any man without previous martial training could become a samurai in less than a year where other samurai were trained from a very young age. Regardless of his past, Yasuke now found himself at the close side of the most powerful daimyo in Japan.

Service and the Honnō-ji Incident

Within a year’s time, Yasuke had become an inseparable and very noteworthy part of Nobunaga’s inner circle. Many different officials, generals, and visitors would take note of this massive African Samurai at the daimyo’s side, often mentioning him in their diaries. His imposing stature of almost two meters (189 cm, or 6’2) meant that he towered above those around him and was often praised by Nobunaga as possessing the strength of ten men. As a samurai retainer, Yasuke was expected to accompany his daimyo everywhere and in the summer of 1582, he would depart the capital east with Nobunaga to inspect the recently conquered lands of the Takeda clan. There he would continue to meet with high-ranking and prominent members of the era, including Tokugawa Ieyasu, who would ultimately unify all of Japan and claim the mantle of Shogun.

The trip would be cut short by a request for military assistance in the west by one of Nobunaga’s generals, and the pair would quickly depart westward, stopping briefly in the Honnō-ji shrine in Kyoto to rest. Here Nobunaga found himself betrayed by the treacherous general Akechi Mitsuhide and the shrine came under attack by thirteen-thousand soldiers, with only the protection of a few dozen retainers and servants, including Yasuke.

Despite the hopeless situation Yasuke and the retainers managed to keep the attackers at bay and prevented them from entering the shrine. However, knowing there was no chance of escape Nobunaga and a number of his servants commit seppuku and set the shrine alight, allowing Yasuke to escape to Nobunaga’s son who had also been attacked at a nearby castle.

The Disappearance of a Legend

Unfortunately, even with Yasuke’s miraculous escape, he was not able to get far before finding himself fighting again. Soon he and Nobunaga’s son and heir would find themselves likewise under attack by Mitsuhide’s forces. Again hopelessly outnumbered, he fought on until he was captured after the death of Nobunaga’s son. His fate from this point on is unfortunately unclear, with conflicting reports mostly only existing from second-hand sources. Some say he was killed, while others say that when brought before Mitsuhide, the general compared him to an animal, not even Japanese, and so instead exiled him back to the Christian church in Kyoto.

From this point on, there is no mention or reference to any African samurai, leaving his fate and possible later life as little more than speculation. Likewise, since this period Yasuke remained a largely unknown figure, despite his phenomenal story and status as the first foreign samurai. This is largely due to the fact that, until recently, much of the world’s historical perspectives have been largely Eurocentric and, similarly, Japanese history placed little interest in foreigners of any type. Because of this, Yasuke has managed to fall through the cracks of historical attention until recently. Largely this was due to the records surrounding him being written as mostly first-hand accounts by either Jesuit Europeans, or local Japanese figures, neither of which took more than a casual interest in the man himself.

Art and depictions of Yasuke

Few records and even fewer depictions of the African samurai exist to the modern-day, despite his uniqueness and near fantastical tale. Never drawn or painted by any modern or contemporary artist, there are only two-period pieces of known Japanese art that could represent Nobunaga’s most unique retainer. The first is an ink-box made in the Rinpa style, which depicts a tall, black man dressed in high-class Portuguese attire, which was commonly worn by Jesuits operating from Goa and eastern Africa. The second is that of a black sumo wrestler, facing off against a samurai, commonly believed to be Oda Nobunaga himself. While the artists of both items are unknown it is likely that these are in fact Yasuke as both were made within twenty years following his service to the Oda clan.

Despite having been forgotten for nearly four hundred years, interest has started to rise around Yasuke, as historical perspectives start to change away from their typical ethnocentric viewpoints. A number of works have been made, either based on or inspired by the samurai’s life. These have included several TV programs, stories, and mangas based around his life and the period. If anything the popularity of the legend continues to grow. At the time of writing of this article there are not one, but two major Hollywood studios in the process of creating live-action films starring the enigmatic swordsman. Furthermore, just last April, Netflix released an animated alternate-reality series, simply named Yasuke which has been well received by critics and has a plan for its own manga series as well.

In a world that has so long forgotten the extraordinary tale of Japan’s first foreign samurai, it is a great relief to see growing attention being placed on such a captivating historical figure. Rather than focusing on made-up, white savior narratives found in other Hollywood films regarding Japan and the samurai, we are beginning to see improvements in both diversity and historical accuracy through stories like Yasuke’s. Despite the fact that, even now, we know so little about him such as his origins, much of his personal story, and even his ultimate fate we can fully see and appreciate just how monumental his story was and that he is worthy of his position as the legendary African samurai.

10 Famous Dance Paintings That Will Make You Want to Join