Zdzisław Beksiński continues to bewitch the world with his hauntingly mesmerizing paintings. Surrealist heritage in his works can be recognized through abstractionism, mysticism, and the exploration of subconscious metaphors. 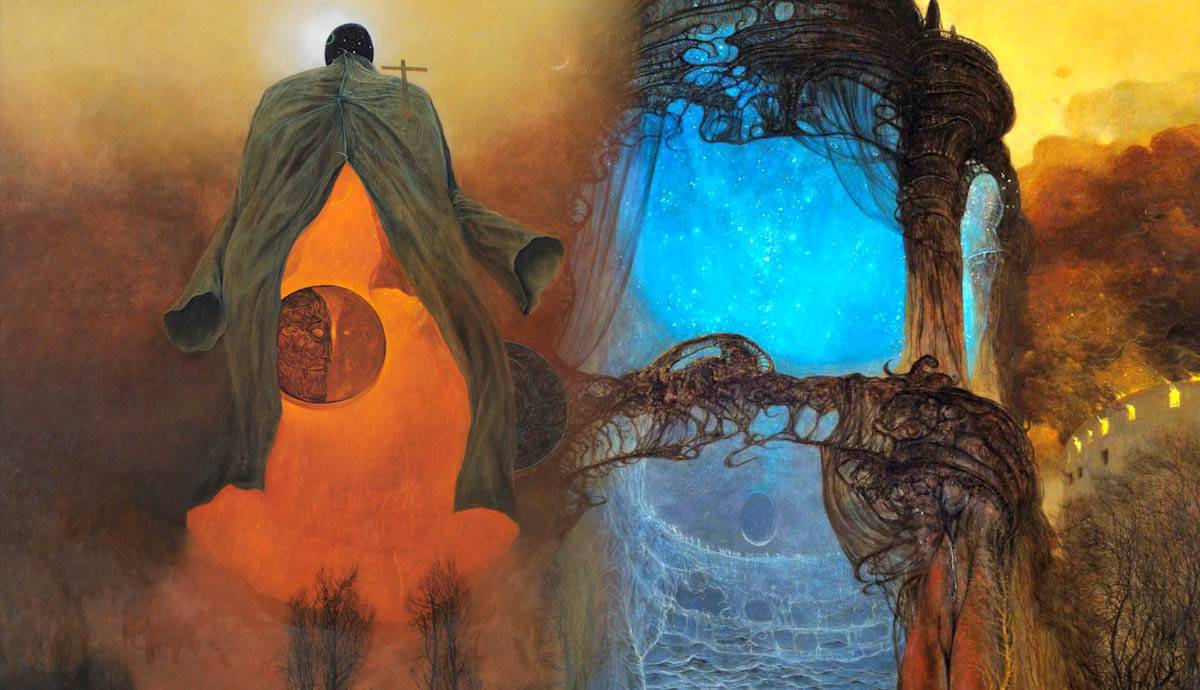 Who was Zdzisław Beksiński? The surrealist artist was born in Sanok, located in the south of Poland. The artist lived out his childhood years amid the atrocities of World War II. He was immensely creative during the reigning communist era in Poland. For a while, he studied architecture in Kraków. During the mid-1950s the artist found his way back home and returned to Sanok. Zdzisław Beksiński started his artistic career by expressing himself in the fields of sculpture and photography.

Along with his artistic pursuits, Zdzisław Beksiński worked as a construction site supervisor. This was a position that he seemingly despised. Nonetheless, he managed to use construction site materials for his sculpting endeavours. The Polish surrealist painter first stood out on the art scene with his intriguing surrealist photography. His early photographs remain recognizable for a myriad of distorted faces, wrinkles, and desolate spaces. The artist also frequently used photographs as tools in assisting his drawing process.

While working as a part-time photographer, his artwork Sadist’s Corset, 1957, caused a considerable backlash in the art community due to its stylized nature, which rejected the traditional display of the nude. His intriguing surrealist photographs never showed the subjects as they were in reality. The figures were always manipulated and altered in specific ways. Behind Beksiński’s lens, everything was obscure and out of focus. The photos were dominated by shapes of silhouettes and shadows.

During the 1960s, Zdzisław Beksiński transitioned from photography to painting, although he never obtained a formal education as an artist. This was ultimately irrelevant since Beksiński would go on to prove his outstanding talent during his long and prolific career. Beksiński’s mesmerizing surrealist creations were never bound to the limits of reality. The surrealist painter frequently worked with oil paint and hardboard panels, at times experimenting with acrylic paint. He would often name rock and classical music as tools that were helping him during his creative process.

The first significant accomplishment of Zdzisław Beksiński was his triumphant solo exhibition of paintings at the Stara Pomaranczarnia in Warsaw. It took place in 1964 and it played a notable role in Beksiński’s rise as a leading figure in Polish contemporary art. The late 1960s were crucial for Beksiński’s conception of the ‘fantastic’ period that lasted until the mid-1980s; death, deformation, skeletons, and desolation adorn canvases from this phase of his artistic career.

During his interviews, the surrealist painter frequently discussed the misconception of his artworks. He would often state that he was unsure what the meaning was behind his art, but he also wasn’t supportive of interpretations by others. This point of view was also one of the reasons why Beksiński never came up with titles for any of his artworks. The artist is thought to have burned some of his paintings down in his backyard in 1977 – he claimed that those pieces were too personal and therefore inadequate for the world to see.

During the 1980s, Zdzisław Beksiński’s work began to attract international attention. The surrealist painter gained considerable popularity among the art circles in the US, France, and Japan. Throughout this period, Beksiński would focus on elements like crosses, subdued colors, and sculpture-like images. During the 1990s, the artist became fascinated with computer technology, editing, and digital photography.

Today, we remember Zdzisław Beksiński as a kind man with an ever-positive spirit and a charming sense of humor, which is quite in contrast with his gloomy artworks. He was modest and open-minded, both as an artist and a human being. In honor of the surrealist painter, his hometown houses a gallery that carries his name. Fifty paintings and one hundred and twenty drawings from the Dmochowski collection are on display. Additionally, The New Gallery of Zdzisław Beksiński was opened in 2012.

Death Prevails: The Tragic End of the Surrealist Painter

The late 1990s marked the beginning of the end for Zdzisław Beksiński. The first sign of sorrow came when his beloved wife Zofia passed away in 1998. Only a year later, on Christmas Eve 1999, Beksiński’s son Tomasz committed suicide. Tomasz was a popular radio presenter, movie translator, and music journalist. His death was a beyond-devastating loss from which the artist never truly recovered. After Tomasz’s passing, Beksiński stayed away from the media and lived in Warsaw. On February 21, 2005, the surrealist painter was found dead in his apartment with seventeen stab wounds on his body. Two of the wounds were determined fatal for the 75-year-old artist.

Before his death, Beksiński had refused to loan an amount of a few hundred złoty (around $100) to Robert Kupiec, the teenage son of his caretaker. Robert Kupiec and his accomplice were arrested shortly after the crime took place. On November 9, 2006, Kupiec received a 25-year-long prison sentence. The accomplice, Łukasz Kupiec, earned a five-year sentence by the court of Warsaw.

After the tragedy of losing his child, Beksiński lost his joyful spirit and became an embodiment of his grim and painful artworks. The artist was left heartbroken and eternally haunted by the image of his son’s lifeless body. Nonetheless, his spirit lives on in the hearts of countless admirers of his work. His art continues to inspire and challenge the minds of all who lay their eyes on his magical canvases.

During his 50-year-long career, Zdzisław Beksiński cemented his reputation as a painter of dreams and nightmares. The horrors of both mind and reality were frequently visible throughout his artworks. Although not formally trained in art, enrolling in architectural studies enabled him to acquire impressive drafting skills. The surrealist painter also learned about the history of architectural design, which would later assist him in presenting various social commentaries in his paintings.

The early 1960s represent the ending of his photography phase. Beksiński thought that this art medium limited his imagination. After his photography phase came a prolific period of painting, which was the most notable period of Beksiński’s career, in which he embraced elements of war, architecture, eroticism, and spiritualism. The themes he explored in his paintings were always diverse, complex, and sometimes deeply personal.

The painter never elaborated further on these themes but instead claimed that, in most cases, there was no deeper meaning lurking beneath the canvas. On the other hand, the political climate of his childhood undoubtedly comes to mind when looking at his paintings. Countless war helmets, burning buildings, decomposing bodies, and general destruction all evoke the atrocities of World War II.

Additionally, Beksiński’s frequent use of the Prussian blue color, named after the prussic acid, also falls in line with other war associations. Prussic acid, also known as hydrogen cyanide is found in the pesticide Zyklon B, and was used by the Nazis in gas chambers. In Beksiński’s paintings, the figure of death is also frequently portrayed dressed in the color of Prussian blue. Furthermore, one of his paintings holds the Latin phrase In hoc signo vinces, which translates as In this sign thou shalt conquer. This collocation was also commonly used by the American Nazi Party.

Perhaps the best way to understand Zdzisław Beksiński’s legacy is to perceive it as an atmospheric art calling for silent contemplation. At first glance, we are bewildered by an interaction of elements that would certainly never occur in real life, which is something that frequently happens when we look at surrealist artworks. Our mental associations collide, creating singular but unfamiliar content. We are left with a strange mixture of chaos, religion, and travesty, all unfolding before us inexplicably.

The post-apocalyptic landscapes in Beksiński’s paintings continue to fascinate the masses with their unique blend of realism, Surrealism, and abstraction. He leaves the world in a state of wonder, forcing us not to look away from the horrors they hold inside, alluding to the fact that strength often hides behind the deepest gloom. Perhaps we should surrender to the melancholia, only for a moment, to uncover the answers we hold within us.

One of Beksiński’s many fans is the famous film director Guillermo del Toro. He thoughtfully described  the works of the surrealist painter: “In the medieval tradition, Beksiński seems to believe art to be a forewarning about the fragility of the flesh– whatever pleasures we know are doomed to perish– thus, his paintings manage to evoke at once the process of decay and the ongoing struggle for life. They hold within them a secret poetry, stained with blood and rust.”

Zdzislaw Beksinski: The Dystopian Surrealist Painter You Should Know

Zdzislaw Beksinski: The Dystopian Surrealist Painter You Should Know

The Rise of Digital Painting: A Contemporary Phenomenon