HomeStoriesZheng He’s Last Voyage: How Ming China Closed Themselves to the World

Zheng He’s Last Voyage: How Ming China Closed Themselves to the World

In the 15th century, Zheng He led seven naval expeditions, spreading the influence of Ming China overseas. Yet, following the great admiral’s death, China shut itself away from the world. 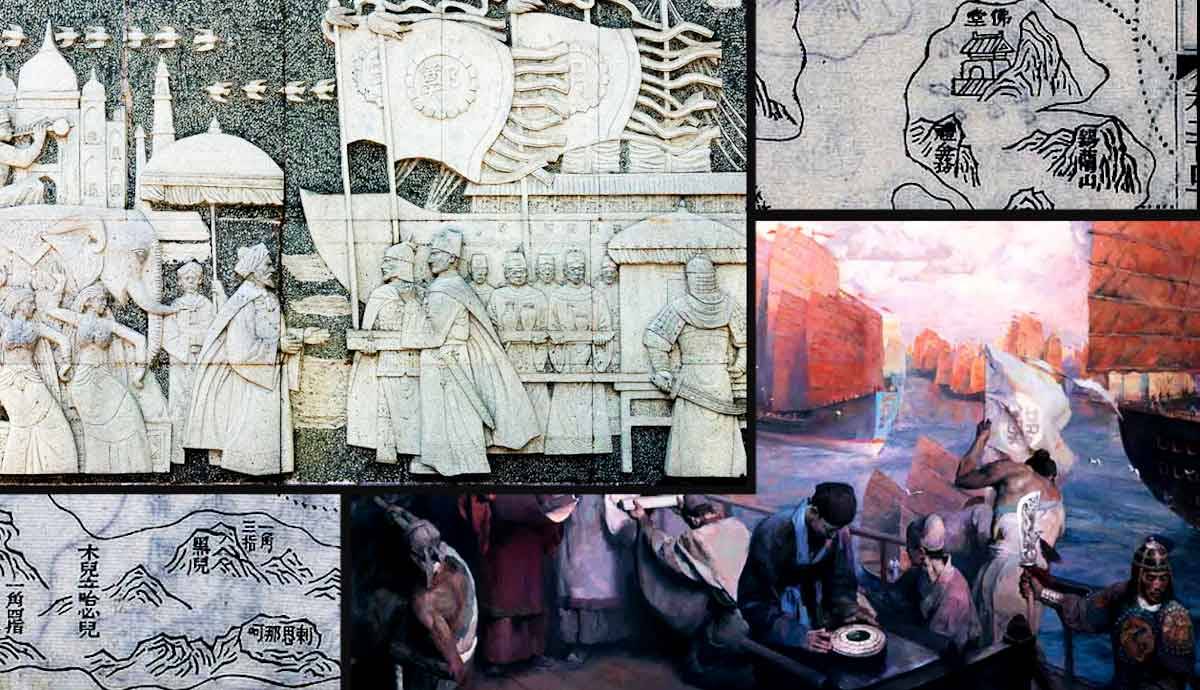 The last voyage of admiral Zheng He and his Treasure Fleet marked the high point of Ming China’s influence on the world’s stage. A seventh naval expedition took Zheng He across the Indian Ocean to Arabia, and to the far-flung shores of East Africa. It also solidified the Ming Chinese tributary system, contributed to by over thirty foreign countries.

Zheng He commanded more than a hundred ships, including giant “treasure ships” — the largest vessels to sail the high seas up to the end of the 19th century. His mission was successful, but Zheng He never saw China again. On his return trip, the 62-year-old admiral died and was buried at sea. Following his death, the voyages ceased, and the Treasure Fleet was dismantled. Ming China shifted its priorities inwards and closed itself to the world — only a few decades before the European explorers ushered in the Age of Exploration.

It is January, and the year is 1431 CE. The place: Nanjing, the southern capital of Ming China and its main port. Everything is ready for another naval expedition to the “Western Ocean.” The mission commander — admiral Zheng He — makes the final preparations and orders his mighty fleet to set sail. Mighty may be an understatement, as Zheng He commands 27, 000 men and over a hundred ships, including giant nine-masted “treasure ships” over 120 meters (394 feet) long and over 50 meters (164 feet) wide. This grand fleet, known as the Treasure Fleet, is on a diplomatic mission to reassert Ming China’s influence and power overseas. The crew knows that they will not see their families for two years, as their trip would take them far west, across the Indian Ocean, to Arabia, and the shores of East Africa.

The Treasure Fleet makes its first stop at Changle, only 800 kilometers (497 miles) south of Nanjing. There, the admiral erects a stele — a massive slab of stone, completely covered with inscriptions. Only after this is complete, the voyage continues. After asking the Goddess of the Sailors — Tianfei — for protection and fair winds, Zheng He states that he has already traveled over 50 000 kilometers (31,086 miles). At first, this sounds unbelievable, as we are in the early 15th century, several decades before the Age of Exploration. Yet it is true. This is the seventh voyage for Zheng He, who has already traversed the Indian Ocean six times. The large stele, discovered in 1938, is a rare surviving record of Zheng He’s incredible career and his fascinating voyages. The stele also offers a tantalizing glimpse into the unfulfilled potential of Ming China — the road not taken.

The Treasure Fleet and Gunboat Diplomacy

In 1431, Zheng He was 60 years old and in poor health. Sitting in his luxurious cabin, the admiral probably reflected on his remarkable life and career, which began in 1371 in landlocked Yunnan province, then under Mongol control. The Muslim boy would probably never have seen the distant sea if not for a tragedy. In 1381, when he was ten years old, his family perished during the Ming conquest. Zheng He was captured, castrated, and sent to serve as a eunuch at the Ming court. Soon he befriended a powerful prince Zhu Di, who would later take the imperial throne as Yongle emperor. To solidify his legitimacy and boost and expand the prestige of Ming China, Zhu Di ordered the construction of the grand fleet — the Treasure Fleet. For its commander, the emperor chose no one other than his close friend and colleague — Zheng He.

In the following decades, Zheng He would take the Treasure Fleet on six voyages, visiting Southeast Asia, India, Arabia, and East Africa. Unlike the later European colonizers or ancient Roman merchants who also engaged in the Indian Ocean trade, the Chinese had a different mission. The enormous navy was designed to coerce  foreign leaders to submit to the Ming and to accept the emperor’s nominal control. It was gunboat diplomacy at its finest. In some rare cases when the sheer size of the imperial  “treasure ships” failed to impress the locals, Zheng He, skilled in the art of war, would employ his fleet’s massive firepower. Thus, it is unsurprising that all six missions were a huge success, flooding Nanjing with exotic gifts and bringing many foreign envoys to the capital. By 1431, over thirty countries, from Malacca to East Africa, became part of the Ming tributary system.

However, not everyone was satisfied with the Treasure Fleet’s accomplishments. Particularly vocal was the Confucian faction, who considered the voyages to be wasteful far-flung cruises. Confucians also opposed the Yongle emperor’s policy of putting eunuchs in high positions. They saw Zheng He, a eunuch admiral, as a major threat. In 1424, the Yongle emperor died while leading a campaign against the Mongols in the north. His son immediately put a stop to the costly expeditions, redirecting the funds for military expenditure, including the rebuilding and expansion of the Great Wall. However, in 1431, the Xuande emperor, Zhu Di’s grandson, approved the seventh voyage.

The Treasure Fleet followed a familiar itinerary, making ports of call in Vietnam and Malacca before transiting the Malacca Strait and entering the Indian Ocean. After visits to Ceylon and Calicut at the southern tip of India, the ships caught a favorable monsoon that took them to Hormuz. Located on the entry to the Persian Gulf, Hormuz was a key point, a meeting place for the maritime and overland Silk roads. After sending an excursion to the holy cities of Islam, Mecca, and Medina, Zheng He ventured further East, reaching the shores of East Africa, and sailing as far as Zanzibar, the expedition’s furthest point. Laden with tribute gifts and foreign dignitaries, the Treasure Fleet returned to China in September 1433, bringing to an end another successful mission.

The fleet, however, came back missing one vital crew member. Admiral Zheng He, who captained Ming China’s vast fleet and commanded all seven expeditions, was not on board. The 62-year-old admiral died on the return journey and was buried at sea. A symbolic tomb containing the great admiral’s caps and clothes was built right outside of Nanjing, where it still stands today. Perhaps this is why Zheng He had had his great stele erected and inscribed, knowing that his time was near.

With the greatest advocate for the voyages dead, the Confucian courtiers began a campaign to systematically destroy all of the records of Zheng He’s voyages. The emperor, now wholly preoccupied with the Mongols and his defensive constructions in the north, ceased the voyages for good and ordered the destruction of the Treasure Fleet. In the following decades, the tributary system collapsed. Instead, Ming China turned inward, shutting itself away from the world.

In an ultimate twist of irony, China withdrew from the world stage only a few decades before European explorers ventured across the high seas, ushering in the Age of Exploration. While the western countries soon turned into maritime superpowers, the vast size and numbers of the Treasure Fleet remained unmatched for centuries to come. Furthermore, European seafarers’ meager gifts failed to impress the locals, who still vividly remembered the precious items and artifacts brought by Zheng He’s mammoth “treasure ships.”

Yet, the era of the Treasure Fleet was over. By closing themselves off, Ming China missed an opportunity to establish a permanent presence overseas, and perhaps even a chance to replace the Europeans as the dominanant naval power in a world that would have been very different from our own. Instead, the international prestige of China gradually faded. When China finally emerged from its long slumber, it faced a much different world, one in which the ruler of “all under Heaven” was inferior on water, while foreign fleets ruled the high seas.

Ritual, Virtue, and Benevolence in the Philosophy of Confucius