When you think of auctions, you’d assume that fast-talking and gavel-knocking is the name of the game. But at elite art auctions like Sotheby’s and Christie’s, a lot of these hot ticket items are sold over the phone. 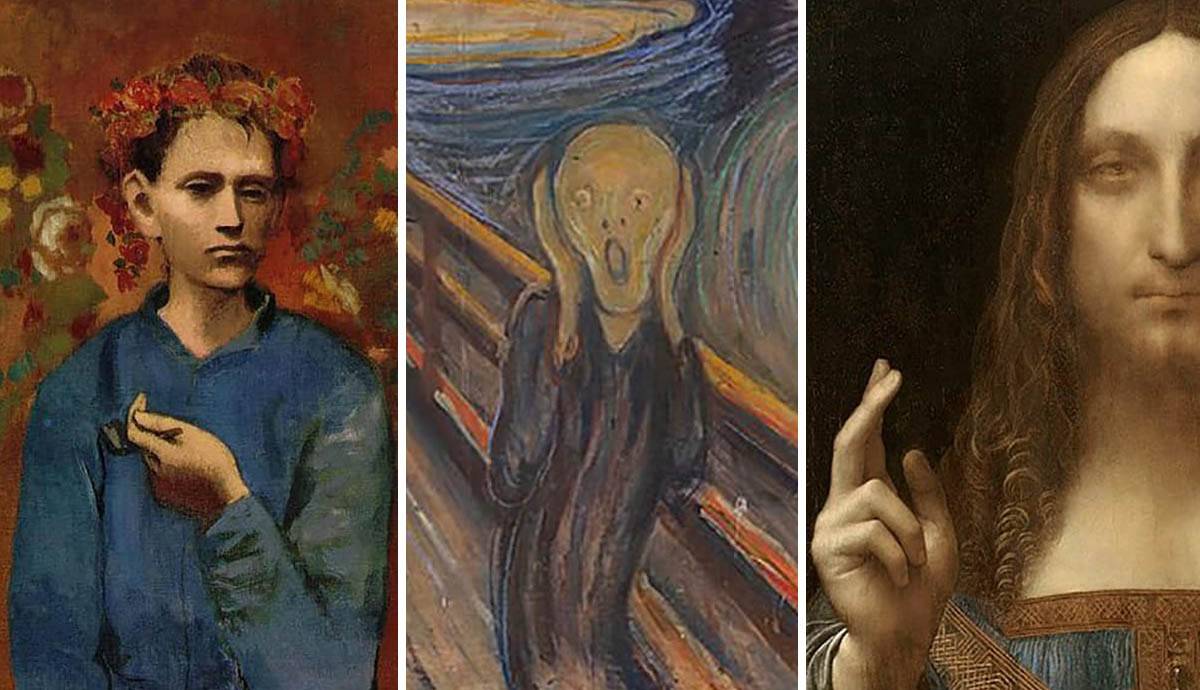 In short, incredibly valuable artwork is on the line and collectors are ready to pay up by any means necessary. With heavyweights like Da Vinci and Picasso making the list, let’s explore the top ten most expensive artworks ever to be sold at auction.

Originally titled Der Schrei der Natur (German for The Scream of Nature), this piece is now popularly known as The Scream. This expressionist painting, completed in 1893 by Norwegian artist Edvard Munch, depicts the iconic image of an agonized face that symbolizes the anxiety of modern man.

Munch created four versions of “The Scream” using paint and pastels, two of which were stolen but later recovered.

In popular culture, The Scream was prolific, being imitated, parodied, and copied across various genres. Andy Warhol created several silkscreen prints including The Scream and Macauley Culkin’s expression of Kevin McCallister on the poster for the movie Home Alone was inspired by the painting, to name a few examples.

The Scream was sold to American businessman Leon Black and is now located at the National Gallery in Oslo, Norway.

During his Rose period, Pablo Picasso painted Garcon a la Pipe in 1905. It features an unknown boy who supposedly lived near Montmartre in Paris where Picasso was settled at the time.

It was sold in 1950 to John Hay Whitney for $30,000 but in 2004 the painting went for over $104 million. The current owner is officially unknown and many art critics have said that the painting is overvalued and doesn’t correlate with the merit or historical importance of the piece.

Twelve Landscape Screens is a set of ink-brush panels painted in 1925 by Chinese artist Qi Baishi, known as the most influential Chinese artist of the 20th century. During his life, Baishi made huge contributions to brush painting, calligraphy, and great seal carving technique.

In 2017, Twelve Landscape Screens became the highest priced Chinese artwork to be sold at auction, making Baishi the first Chinese artist to join the $100 million club. The current owner of this piece is still unknown to the public.

Currently housed at the Musee d’Orsay in Paris and celebrated as one of Impressionism’s most important masterpieces, Bal du Moulin de la Galette is an 1876 painting by French artist Pierre-Auguste Renoir.

It depicts a Sunday afternoon at the Moulin de la Galette in the late 19th century where working-class Parisians would dress up to go dancing and drinking while eating cake.

Bal du Moulin de la Galette was sold to Ryoei Saito, a Japanese businessman and honorary chairman of Daishowa Paper Manufacturing Company. When Saito ran into financial trouble, the painting was used as collateral and now is said to be owned by a Swiss collector.

Three Studies of Lucian Freud is the second of two triptychs that British artist Francis Bacon painted in 1969 of fellow artist, friend, and rival Lucian Freud. All three parts of this piece are constructed in the typical Bacon style of abstraction, distortion, and isolation.

Art critics from Christie’s noted that the piece is “paying tribute to the creative and emotional kinship between the two artists” whose relationship ended over an argument in the mid-1970s.

Three Studies of Lucian Freud was sold to Elaine Wynn and became the highest price paid for a work by a British or Irish artist.

Painted by Italian artist Amedeo Modigliani, Nu Couche (sur le cote gauche) is part of a famous series of nudes done in 1917. They were presented at his first and only art show in 1917 at Gallerie Berthe Weill, which was shut down by police.

Art critics from Christie’s made the note that this series reaffirmed and reinvigorated the nude as a subject of modernist art. The current owner of this piece is unknown.

As Dutch artist Vincent Van Gogh started to experience mental health issues leading to the, now infamous, cutting-off of his ear, he admitted himself into an asylum in 1889. In what we might expect from Van Gogh, who often painted portraits, Portrait of Dr. Gachet is an oil on canvas painting of Dr. Gachet, the man who took care of Van Gogh during the final months of his life.

There are two distinct versions of Portrait of Dr. Gachet, different in both color and style. The first version listed here was sold to Ryoei Saito, the same Japanese businessman who bought Bal du Moulin de la Galette.

Nu Couche is another oil on canvas painting in the series of nudes by Italian artist Amedeo Modigliani from 1917. It was sold to Chinese businessman Liu Yiqian to become part of his private collection.

Les Femmes d’Alger is a series of 15 paintings and drawings by Spanish artist Pablo Picasso. Version O is the final painting in the series and was completed in 1955. In Picasso’s classic cubism style, Les Femmes d’Alger was painted as a nod to Eugene Delacroix’s Femmes d’Alger dans leur Appartement from 1834.

The painting was first sold in 1997 for $31.9 million at Christie’s, New York and was later auctioned for the second time in 2015. Its presale value was listed at $140 million, making it one the highest values ever to be placed on an auctioned artwork.

Attributed to Leonardo da Vinci, the original Salvator Mundi may have been painted c. 1500 as commissioned by Louis the XII of France. The original was long thought to be lost after the 17th century but in 1978 a compelling case was made for its rediscovery.

Over 20 different versions of Salvator Mundi have been completed by his pupils. In fact, scholars can’t seem to agree whether Salvator Mundi can even be attributed to da Vinci at all.

Translated to Savior of the World, this painting depicts Jesus dressed in Renaissance-style garb. His right hand is held up to make the sign of the cross and in his left hand, he holds a crystal orb.

It was housed in the National Gallery, London from 2011 to 2012 after being restored. Then, it was sold in auction to Prince Badir bin Abdullah on behalf of Abu Dhabi’s Department of Culture and Tourism.

Coming in at over $100 million more than the next most valuable artwork ever sold, Salvator Mundi is by far the most expensive painting in the world.

8 Modern Chinese Artists You Should Know