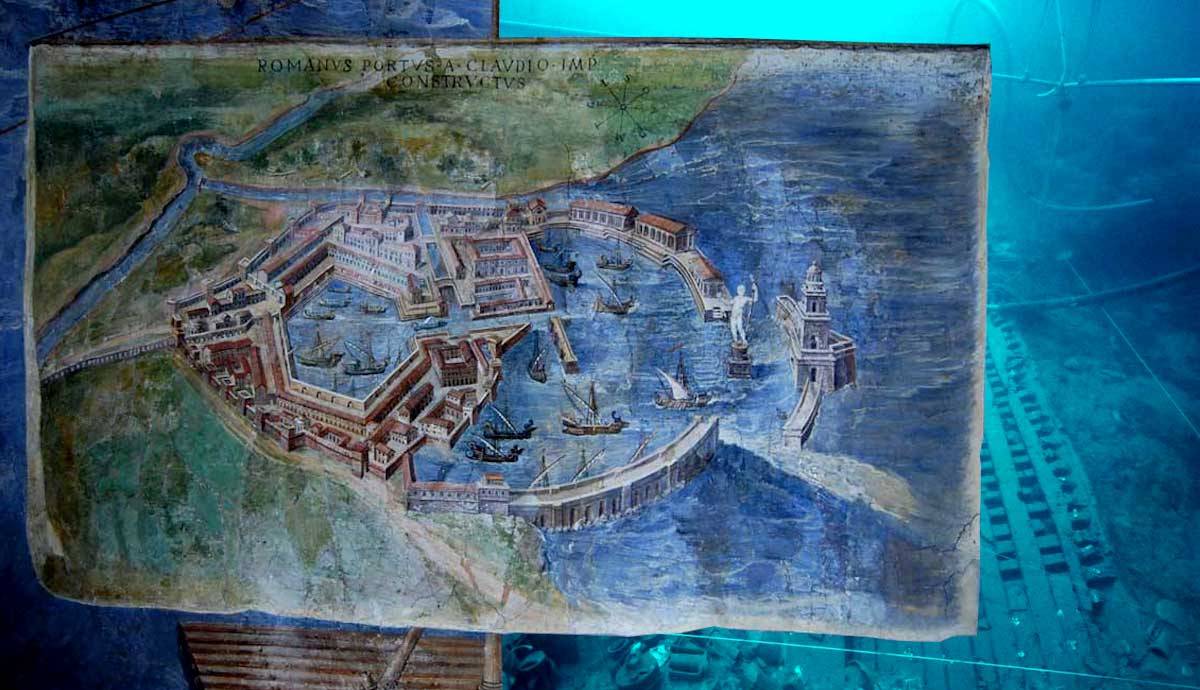 For ancient mariners, the Mediterranean Sea was a chaotic place. Sailors had to deal with fickle Mediterranean winds, unpredictable storms, fierce waves, and shifting tides. Yet, despite the dangers of sea travel and its seasonal limitations, sailing was the preferred way to travel. The Mediterranean had a vital role for the ancient Romans, allowing fast and efficient communication between all parts of the vast Empire. Ships could transport anyone to their destination quickly, in relative comfort. In ideal conditions, a voyage by sea from Rome to Alexandria would last less than a month, whereas traveling strictly by road could take almost half a year.

Mediterranean trade and travel transformed the Roman Empire, facilitated its expansion, and increased its power and wealth. Thus, it is unsurprising that their inability to keep control over the “inner sea” led to collapse in the West, while in the East, the Empire’s limited control over vital ports and sea lanes assured its survival.

Initially, the Romans were hardly ancient mariner-material. Mariners had plied the waters of the Mediterranean since the dawn of civilization, but unlike the ancient Egyptians, Greek city-states, Carthage, and other seaborne realms, the Romans were primarily land-based people. However, they learned quickly and were willing to experiment. Thus, by the end of the first century BCE, Rome defeated its main rival Carthage, becoming a major Mediterranean Sea power. Realizing the central importance the Mediterranean had for trade and communication, the formidable Roman navy declared war on local pirates, who for centuries had infested the waters of the “inner sea,” raiding ships and eluding pursuers. In a lightning fast campaign, Pompey the Great eradicated piracy, transforming the Mediterranean into “Mare Nostrum” or “Our Sea.”

Following the triumph at Actium and the demise of Ptolemaic Egypt, the Mediterranean became a Roman lake. Emperor Augustus was aware of the importance of the “inner sea” to the Roman economy and communications. The “Mare Nostrum” was the Empire’s heartland, and the sea lanes that linked the West with the East were its lifeblood, facilitating trade and transport over great distances. Augustus and his successors secured Roman mastery over the Mediterranean by maintaining a powerful navy. In addition, they constructed new harbors and expanded existing ones. The most important trading hubs of the Empire were Ostia and Puteoli in Italy, Alexandria in Egypt, Carthage in Northern Africa, and Antioch in the Levant. The other harbors of importance included Caesarea in Syria, Corinth, and Athens in Greece, Gades (Cadiz) and Tarraco (Tarragona) in Spain, and Narbona (Narbonne) and Massilia (Marseilles) on the southern coast of France.

Besides dealing with sporadic piracy, the main task of the Roman military fleet was to patrol the shipping lanes. One such route, leading from Alexandria to Ostia, was of utmost importance for the Empire since it carried an uninterrupted supply of grain, feeding Rome’s growing populace. Even warships carried this vital sustenance. The vessels of the grain fleet varied in size, but the largest could carry up to 350 tons of grain.

Most merchant ships plying the Roman Mediterranean were smaller boats, their carrying capacity ranging from 100 to 150 tons, or up to 3000 amphorae. However, some trade vessels were leviathans of their time. Those ships, known as myriophoroi, could carry more than 10,000 amphorae (thus their name – “10,000 carriers”), filled with wine, olive oil, and garum (fermented fish sauce). The Madrague de Giens shipwreck for example, was a 40 meter (131 feet) long, two-mast merchantman that transported between 5,000 to 8,000 amphorae, weighing up to 400 tonnes. The enormous size of this vessel probably mirrored its counterparts engaged in the long-distance Indian Ocean trade.

There were also giant ships specially built to haul enormous cargo. During the reign of Emperor Caligula, one such vessel hauled a colossal Egyptian obelisk to Rome, about 40 meters (131 feet) long, and weighing 500 tons. To make the ballast, the sailors filled the ship with eight hundred tons of lentils, bringing the total cargo weight to 1300 tons!

People on the Move

The primary task of the mightiest merchant marines in the ancient Mediterranean was to carry goods. To facilitate day-to-day trade, the Roman emperors spent lavish sums to expand and maintain principal ports and harbor facilities. Coins stamped with a boat or harbor scenes commemorated acts that benefited commerce. In addition, the Mediterranean merchant navy played a significant role in a much larger trade system, which involved lucrative long-distance trade with distant lands, such as India and China. Yet, there was another important role that merchantmen (and occasionally the warships) would play — the transport of people.

Ancient mariners had no dedicated passenger ships. War galleys could accommodate non-military passengers, but those were the rare exception, used for the fast transport of high-ranking dignitaries or other men of special importance. Thus, those who wanted to travel by sea had to procure a spot on a merchant’s vessel. Merchant ships sailed along fixed trade routes, visiting the same ports so that prospective passengers could reach their destinations relatively easily.

However, sea lanes were partly restricted by seasons. In antiquity, the high point of the sailing season was from May to October. The winter months hindered coastal navigation due to reduced visibility and hours of daylight. The open-water lanes remained open for navigation, but crossing deep waters in a ship with a shallow bottom carried a risk. On certain occasions, such as religious festivals or wartime conditions, the departure of ships from ports was barred.

The first step for a prospective traveler was finding a ship going directly to or near the desired location. The search began at the waterfront, by making an inquiry to a ship’s captain or by finding an office or marketplace associated with a specific trade route. After getting to the desired vessel, the passenger negotiated a reasonable price with the owner or captain to secure space onboard. Yet, there was no guarantee that the ship would depart when scheduled. To leave port, not only did the winds have to be favorable, but the omens as well. Ancient mariners were superstitious when it came to sailing. Thus, before every departure, Roman sailors made pre-sailing sacrifices to the gods to ensure a safe journey. If omens were bad, the ship would wait for a more favorable sign. The crew and passengers would also offer a prayer to a deity for a safe journey.

Once aboard, the accommodation was austere. Only a select few, such as the captain or wealthy Romans, had access to a cabin. The rest had to sleep on the deck — either in makeshift tents or under the open sky. There was no service for passengers, as the crew had to keep the ship sailing and cargo safe. Therefore, it was on travelers to procure their own items, including clothing, cooking utensils, and materials for sleeping. Wealthier passengers would bring their servants or slaves to care for them during the journey.

Those ships traveling longer distance usually had a galley or a kitchen with a hearth for cooking. The food included grain, fruit seeds, meat, and fish. Some of the fish could be caught while sailing. As the voyage usually took several days, passengers passed the time watching the crew doing their chores, or enjoying the view of the sea and the coastline. They might also gamble, play games, share stories, or, if needs be, help with the vessel’s maintenance and sailing. Those of a more entrepreneurial nature conducted business with their fellow passengers. Dancing was strictly forbidden as it was considered taboo and a bad omen among ancient mariners.

Before the ship made port, the captain would make another sacrifice to thank the gods for their safe arrival. If it were a large vessel, a small tugboat would tow it to the dock. The crew would then lower the gangplank, and passengers would disembark, signaling the end of their journey.

Ancient Mariners and Transformation of the Roman World

For centuries, Rome dominated the Meditteranean sea, not only in terms of military might but also with a vast trade network that carried goods and passengers to all corners of the Empire and beyond. Although most merchant vessels were privately owned, Mediterranean trade benefited greatly from the direct support of the Roman emperors and the state. As a result, commerce grew like a weed. Already in the mid-first century CE, Roman merchant traffic in the Mediterranean Sea surpassed the total that the Hellenistic world and Carthage had achieved earlier.

The citizens of Rome ate bread baked with wheat grown in North Africa or Egypt and fish caught near the Atlantic coast. They cooked with North African or Greek oil in pots and pans made of copper mined in Spain and drank wine from France or Italy. Those wealthy enough dressed in wool from Asia Minor or linen from Syria and Egypt. Their women wore silks brought from distant China, adorned themselves with diamonds and gems from India and Afghanistan, or perfumed themselves with cosmetics delivered from Arabia and Eastern Africa. Their food was seasoned with Indian pepper and sweetened with Athenian honey. The houses of the wealthy were filled with expensive furniture made of Indian ebony, African ivory, and statues imported from Greece. It was truly the first period of globalization. But it was not to last.

In 269 CE, the Romans experienced their first shock when the Goths descended on the peaceful coastal towns of Asia Minor. After more than two centuries, the Mediterranean was once again a hostile sea. The Roman emperors, confronted with more pressing issues on all external fronts and distracted by costly civil wars, managed to minimize the danger by dispatching the navy to deal with the threat. Still, the Mediterranean was slowly sliding out of the Roman grasp. After Roman power collapsed in the Western Mediterranean, eastern waters remained the only area controlled by the imperial navy.

Despite the attempts of Emperor Justinian to restore control over the entirety of “Our Sea” the Mediterranean would never again be a Roman lake. After the withdrawal of imperial control in the seventh century from eastern shores, the age of ancient mariners came to an end, leaving the Mediterranean and its trade routes to new masters.