What is Jurgen Habermas’ discourse ethics? We will answer this question by delving into his intellectual forebears and his thought process.. 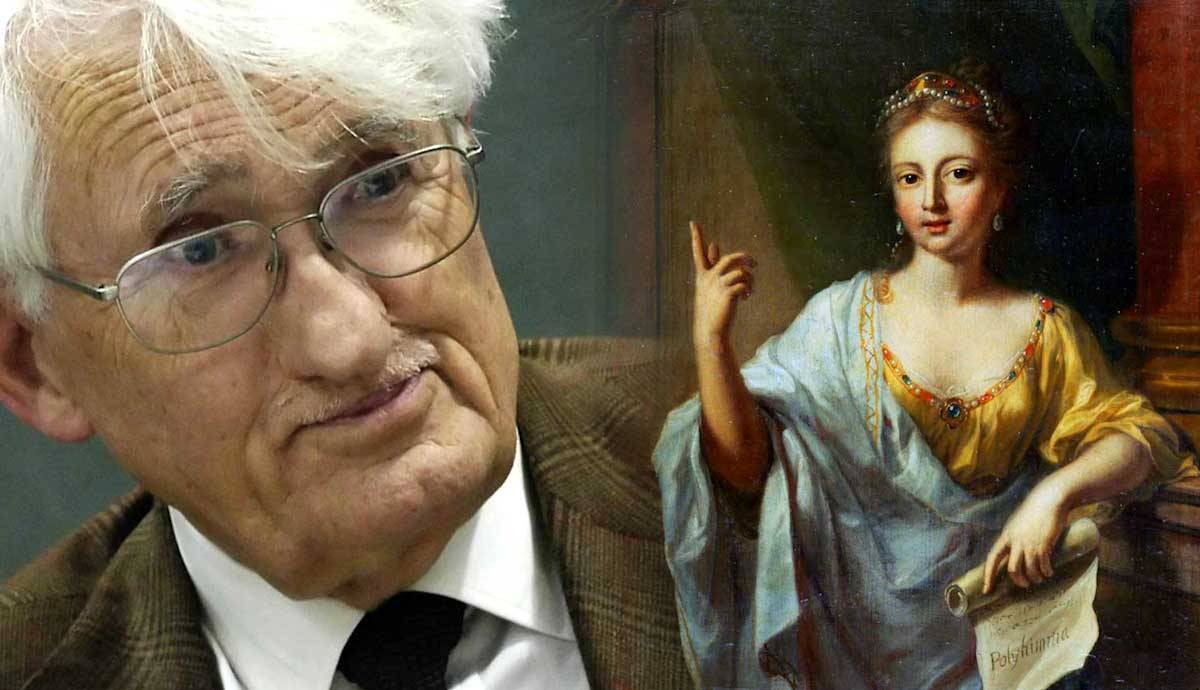 Jurgen Habermas’ biography is crucial when attempting to understand his theory of morality and his theories of communication, discourse ethics and speech. His early life was of singular importance for Habermas’ intellectual passions and inclinations. Habermas was born in 1929 and was only three years old when Adolf Hitler became the German Chancellor. His family was a rather typical German family of the period which followed, in that they passively acquiesced to the Nazi political order without being zealous adherents.

As with most young German men at the time, Habermas joined the Hitler youth. However, after the Nazi occupation and as details of the atrocities committed during the Second World War became public knowledge in Germany, Habermas was profoundly affected and his faith both in the German philosophical tradition and Germany’s political culture was obliterated by this knowledge. These experiences led to the philosopher creating a new approach to ethics that would become deeply influential in the decades to come.

Having been heavily influenced by Martin Heidegger as a young man, Habermas was appalled by Heidegger’s failures both during the Nazi period – when Heidegger was a prominent supporter of Hitler’s regime – and afterwards. He was especially disappointed by Heidegger’s failure to remove a pro-Nazi passage from the introduction to his famous Introduction to Metaphysics, in which he praises the ‘inner truth and greatness’ of National Socialism.

Heidegger’s relationship with Nazism is a matter of bitter scholarly dispute, but that he was more vocally supportive of the Nazi government than other philosophers of the period, even those who chose to remain in Germany (notably, Hans-Georg Gadamer). Habermas also saw the first post-Nazi government of West Germany, led by conservative politicians, as an abnegation of Germany’s responsibilities for the Second World War and the Holocaust.

This extremely negative early exposure both to leading German philosophers and to politics informed a number of Habermas’ overriding concerns. Of particular importance for understanding Habermas’ discourse ethics is that he takes a liberal-left view of politics and understands strong participatory political systems as a bulwark against atrocity and authoritarianism.

2. The Frankfurt School Was of Key Importance for Habermas

Almost every introductory work on Habermas begins by observing that he is one of the most important living philosophers of our time. Whilst that is no doubt true, its ubiquity expresses Habermas’ perceived status as the last member of a major philosophical movement. This school was committed to refining Marxist thought, especially in response to the social and technological developments of the 20th century. ‘The Frankfurt School’, based at the privately run Institute for Social Research in Frankfurt included Theodor Adorno (for whom Habermas was a research assistant), Max Horkheimer and Herbert Marcuse. One of the Frankfurt School’s major innovations was an increased focus on integrating philosophy and various human sciences; for instance, Herbert Marcuse’s work involves a great deal of philosophical engagement with psychology and psychoanalysis.

Understanding certain commitments Habermas’ thought in general means understanding something about this latter school. It is worth stressing that this was not the dominant strand in German philosophy; Habermas’ own pessimism about the German philosophical tradition implicitly marks that tradition as culminating with Heidegger. The Frankfurt School’s overriding project was, roughly speaking, to adapt Marxist thought so that it could account for some of the various social and cultural developments of the 20th century. Habermas’ allegiance to Marxism is dubious, and likely changes as his work matures. The conventional understanding is that Habermas moves from a relatively orthodox Marxist position to a critical, dubious liberal one, though an in-depth analysis of this move isn’t possible here.

It is worth highlighting a key component of Frankfurt school thought, namely the opposition between critical theory, what the Frankfurt School holds to be the appropriate investigation method as applied to the human sciences and our understanding of politics, and traditional theory; that is, the observation-experimental mode of the natural sciences.

Horkeimer puts the point this way: “The facts, which our senses present to us, are socially performed in two ways: through the historical character of the object perceived, and through the historical character of the perceiving organ. Both are not simply natural; they are shaped by human activity, and yet the individual perceives himself as receptive and passive in the act of perception.” To be clear, that our investigation of social phenomena is never separable from our position within social processes, and that our position within social processes is constantly being shaped by our investigations into them, is not straightforwardly adopted by Habermas.

Nonetheless, much of his research, and certainly his discourse ethics, involves the notion that human activity is constantly acting even on our most abstract, normative judgments. It is here that a definition of discourse ethics is in order. Habermas’ discourse ethics is an approach both to the philosophy of communication and ethics which has wide ranging implications for our social lives and for political activity. Almost all of the concepts used in the last sentence (‘discourse’, ‘ethics’, ‘communication’, ‘social’, ‘political’) have technical uses in Habermas’ work, or a range of such uses. It is important to emphasize that Habermas conceives of discourse ethics both as an investigation of the process by which moral norms are created and assumed, as well as a set of moral principles themselves.

It is therefore reasonable, on a pragmatic level, to ask how far giving an account of Habermas’ thought, which is to say presenting it in brief or in outline, is the appropriate way of approaching his thought. It might also make sense to approach Habermas’ thought in a more gradual way, which preserves certain interpretive and critical moves.

4. We Need to Keep in Mind Habermas’s Systematic Thought When Talking About Discourse Ethics

If the alternative in contention is outlining a system part by part whilst critiquing it at each step, it is worth stressing the ways in which the systematic element of Habermas’ thought lends itself to this approach. A self-consciously systematic approach to philosophy often closes itself to criticisms of the system as a whole. The position which the critic is left in is broadly that of attempting to demonstrate the existence of internal inconsistencies or to approach the system with a wholly separate theoretical vocabulary and demonstrate the superior qualities of said vocabulary.

Yet this is already a limited toolbox of critical instruments, and so approaching a systematic philosophy has a tendency to lead one to elide certain structural issues when the options available to a critic are approaching using only its own vocabulary or only an alien vocabulary. The partial refutation, the amendment, the refining counterexample and many, many other intermediate critical positions are far more easily applied to a system when it is taken part by part, rather than set out all at once.

5. There Are Two Main Principles of Discourse Ethics

Habermas’ discourse ethics – or specifically, the part of his discourse ethics which functions as a theory of or approach to morality as such – consists in two main principles. These are not two moral principles in the way that the Decalogue contains ten moral principles; that is, different principles to cover different aspects of moral life. These principles can, rather, be seen as two attempts at getting at the same underlying idea about the relationship between discourse and morality. The two principles are as follows: the first, known as the ‘discourse principle’, states that “only those action norms are valid to which all possibly affected persons could agree as participants in rational discourse”.

The second principle, known as the ‘moral principle’, is commonly understood to be stronger than the discourse principle. It holds that: “a norm is valid if and only if the foreseeable consequences and side effects of its general observance for the interests and value-orientation of each individual could be freely and jointly accepted by all affected”. It is difficult to offer a fully-fledged critique of these two principles without setting out Habermas’ system in far greater detail than there is space to here.

6. Discourse Ethics May Lie on a Shaky Assumption

Nonetheless, it is worth observing where one major vulnerability lies in this approach to discourse and ethics, not least because it is rather emblematic of concurrent developments in the Anglophonic world – particularly the work of Timothy Scanlon and John Rawls. The latter principle constitutes a universalizability condition, similar to and derived from Kant’s first formulation of the categorical imperative: “act only in accordance with that maxim through which you can at the same time will that it become a universal law”.

Habermas believes that the ‘moral principle’ needs to be rationally deduced, to avoid the accusation that it is a kind of ethnocentric, culturally specific prejudice about actions rather than a principle with universal validity and general ethical force. However, he himself does not offer such a deduction, though he is confident that it exists.

There is good reason to think that reaching this kind of aporia in one’s own thought requires more than the assumption of that which is missing. There is equally good reason to question what rational principle could offer a derivation of universalizability conditions of this kind, in light of the vast expanse of open water which lies between us and the kind of ideal discourse Habermas theorizes. Is it possible to conceive of the conditions of totally free acceptance? Is it possible to think of a society in which absolute agreement is ever reached?

Martin Heidegger’s Antisemitism: The Personal and the Political