What Was the Shocking London Gin Craze?

Gin was cheap and plentiful in 18th century London. Unregulated, gin was sold on every street corner. An antidote to misery in the slums, London’s Gin Craze was deadly. 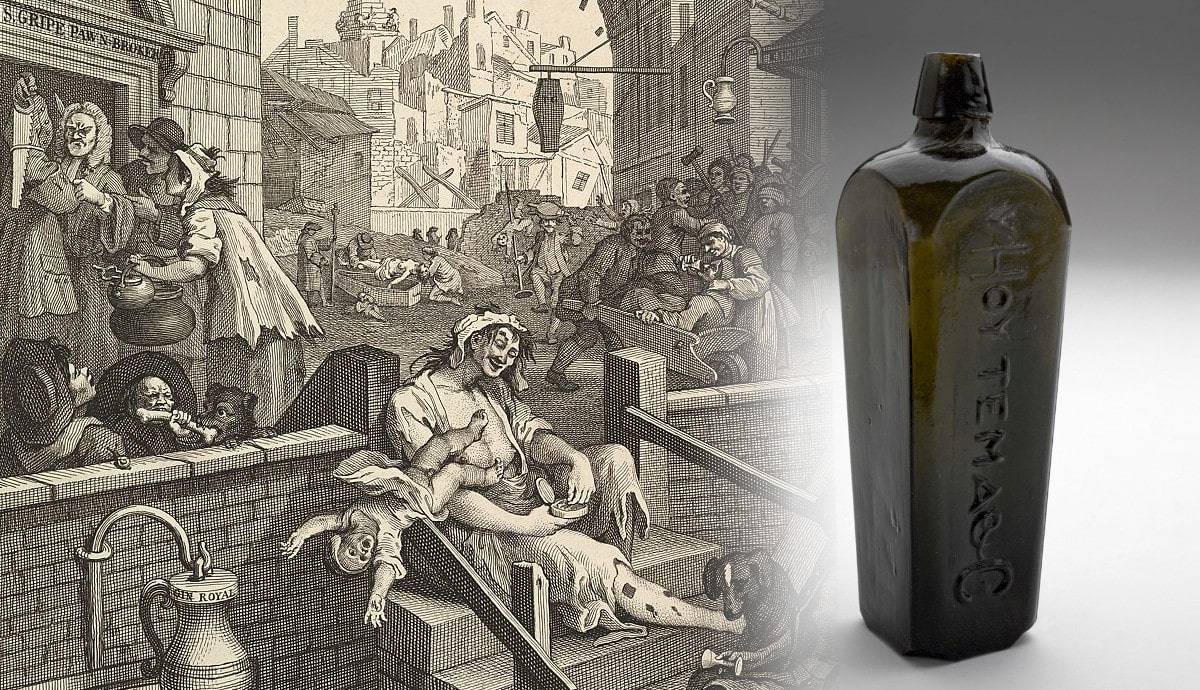 18th century London was a miserable place to be. Britain was experiencing one of the coldest intervals in history, the Little Ice Age. The Enclosure Acts were driving people away from village life and into the capital, where life was precarious. Fortunes could be made and lost in one day, thus making poverty rife. The antidote to this, in the short-term at least, was a clear liquid called Madam Geneva, or “gin” for short. The Gin Craze not only destroyed the lives of thousands of Londoners it threatened the very fabric of moral society itself.

The Glorious Revolution: The Precursor to London’s Gin Craze

After James II of England and VII of Scotland fled the country, his daughter Mary II and her husband William of Orange ascended the English throne in joint rulership. As author Patrick Dillon puts it, once the Dutch prince became King William III of England, London was “awash” with Madam Geneva. Gin was a distinctly Dutch spirit, not drunk by the English prior to William’s kingship. Yet after William’s coronation, when he and his cronies got so drunk (presumably on gin) that the new king fell asleep in his chair, this set the standard for the rest of London.

Prior to the coming of Madam Geneva to English shores, people would gather at an inn to imbibe beer and wine, but the buzz was minimal. Various prohibitions on French brandy had been in place since the reign of Charles II. In addition to this lack of brandy, Parliament passed an Act in 1690 “to encourage the distilling of…spirits from corn”.

Corn (which was a generic name for any grain crop, such as wheat) had formerly been preserved for the baking of bread, but now it was available to gin makers to distill spirits. When corn was not at hand, it was suggested by reformers, animal bones and even human ordure were used. The results were enough to render a full-grown man unconscious.

Gin drinkers today will appreciate that the botanicals used in the distillation process that contribute to gin’s unique flavor also contribute to its sometimes lofty price tag. Madam Geneva was gin that was infused with juniper berries. The poor men and women who filled London with their makeshift backroom gin shops did not have the means to procure the fragrant and flavorful botanicals which give gin its distinctive flavor. London journalist Daniel Defoe penned that “petty distillers…made up compound waters from such mixed and confused trash…The spirits they drew were foul and gross.”

There were no regulations on the making of gin, in terms of what was used, how it was made, where it was made, and how much was made. Parliament was only interested in enabling farmers to sell their grain.

In Patrick Dillon’s book, Gin: The Much-Lamented Death of Madam Geneva, the author discusses why people drank as much gin as they did in London in the early 1700s. One reason was to follow the fashion of the upper classes, who had an insatiable thirst for Madam Geneva. Another reason was to support local commerce. A third reason was the sheer abundance of gin that was available; in 1713 alone, London distillers had produced two million liters of raw alcohol for a population of roughly 600,000 people, with the finished product selling for a penny a dram.

The most compelling reason why Londoners developed such a deep dependency on Madam Geneva that resulted in the Gin Craze, is a human one. It provided an escape from the miseries of poverty. One woman told a magistrate that she drank it “to keep out the wet and cold” while she worked in her market stall. Otherwise, she claimed in her statement, she could not bear the long hours, the hard labor, and the awful weather. Her situation makes it easier to understand London’s Gin Craze.

“Drunk for a Penny, Dead Drunk for Twopence”: Depictions of the Gin Craze by William Hogarth

No one captured London’s Gin Craze more confrontingly than artist William Hogarth. In his etching entitled Gin Lane, Hogarth depicted the devastation that gin had brought upon his fellow Londoners. The gin den in the foreground bids people to enter, with the promise that they can get “drunk for a penny, dead, and drunk for twopence”.

To the right of the picture is a cadaverous man who may already be dead, his drinking cup in one hand and his gin bottle in the other. Above his head, two young girls can be seen taking a drink of gin, whilst a mother pours some down her infant’s throat. To the left is a boy who fights with a dog over a bone. Behind the boy, a carpenter is selling the tools of his trade to a pawnbroker so that he can afford more gin. In the background, a dead woman is being lifted into a coffin, her infant child left sitting on the ground beside her coffin. Next to them is a drunken man who in his crazed stupor has impaled a child on a spike, the child’s horrified mother is screaming at him but he appears oblivious. In the upper right of the picture, we see a solitary figure hanging from the rafters in their garret, an apparent victim of suicide and of London’s Gin Craze.

The central figure in Gin Lane is a mother who is so drunk on gin that her baby falls from her arms and into the street below. Her legs are covered with the lesions of a syphilitic, implying that she has turned to prostitution to fuel her gin habit.

Whilst Hogarth’s etching may have been a scathing attack on the decay that Madam Geneva had brought to London society, his pathetic figures are hardly exaggerated. The London Journal published stories about a woman so drunk that she could not rouse herself in time to escape her burning chamber and a man who died on the spot after drinking gin. Even more tragic than these stories of London’s Gin Craze is that of Judith Defour.

The Tragic Case of Judith Defour

Judy Defour was born in 1701, putting her at middle age during London’s Gin Craze. She has become a cautionary tale associated with this period and is known to modern-day audiences via the recording of proceedings against her held at the Old Bailey.

When Judith was 31 years old, she gave birth to a daughter named Mary. By the time that Mary was two years of age, her mother had left her at a workhouse because she did not have the means to care for the child. She evidently stayed in contact though; Judith was permitted to take Mary out of the workhouse for a few hours, which was her right as the child’s mother.

One Saturday in late January 1734, Judith and her friend, only known as “Sukey”, attended the workhouse to collect Mary. When they left, according to court records, the two women took the toddler into a nearby field, stripped her clothing from her, and tied a linen handkerchief around the child’s neck, to “keep it from crying”. Judith and Sukey then laid Mary in a ditch and abandoned her, taking the child’s clothes with them. They went back into town and sold the coat for a shilling and the petticoat and stockings for two groats. They then split the money between them and went out and spent it on a “Quartern of gin”.

Witnesses who worked with Judith the following day stated that she had told them that she had done something that deserved Newgate, and then asked for money to buy food, which she was granted, yet she used it to buy more gin. Mary was found dead in the ditch where her mother had left her. Judith Defour was quickly apprehended, found guilty of murder, and was executed in March 1731.

The End of London’s Gin Craze: The Death of Madam Geneva

London’s Gin Craze finally came to an end in 1751, when Parliament passed the Sales of Spirit Act of 1751. By this stage, the government had realized what a truly terrible toll London’s obsession with cheap spirits was having on society. This Act was created because gin had been identified as the city’s main cause of laziness and crime. During its peak in the 1730s, Londoners were imbibing 2 pints of gin each per week.

Parliament and leaders of religion had tried twice before to curb London’s addiction to gin, once in 1729 and once in 1736, with Acts that raised taxes and brought in licensing fees for the production and sale of gin. However, these were dropped when the working classes started rioting in the streets of London in 1743.

The 1751 Gin Act once again brought in financial disincentives for the making and selling of gin, but this time Parliament had an ace up their sleeve. They offered the people of London a more refreshing and less addictive alternative — tea.

Formerly a drink that only the wealthy could afford, the British East India Company’s imports of tea had quadrupled in the years spanning 1720 to 1750. By the 1760s, one observer noted that the poor were avid tea drinkers of tea; even beggars could be seen taking a cup of tea in the city’s laneways.

French historian Fernand Braudel believed that this new drink had replaced gin in England. When cases like that of Judith Defour are considered, this replacement had not come a moment too soon.