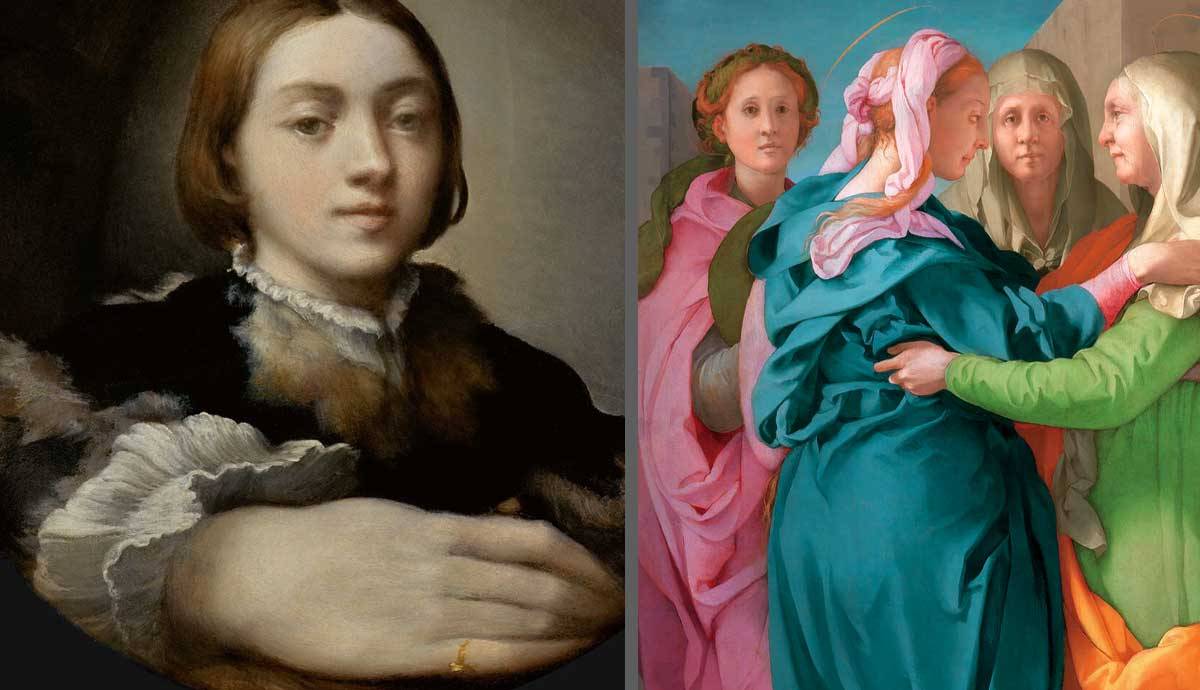 Mannerism was a 16th century style of art that emerged out of late Renaissance Italy, and spread into other parts of Europe. Its name is derived from the Italian word maniera, simply meaning “style,” and it is sometimes known as the “stylish style” for its self-consciously exaggerated aesthetic. In contrast with the dazzling realism of High Renaissance art, Mannerist art moved beyond reality, playing with stretched, twisted and elongated bodies, unusual viewpoints, exaggerated colors and sensuously flowing visual effects. It was a fascinating period in art history, when artists demonstrated a virtuoso command of painting techniques that allowed them to invent their own imaginative version of reality. This ostentatious language of Mannerism ushered in a new era of artistic experimentation, paving the way for the Baroque and Rococo styles that followed. We break down some of the key traits of Mannerist art in more detail, with some key examples.

One of the hallmark features of Mannerist art is the use of dazzling, disorientating or illogical visual effects. Paolo Veronese’s The Feast in the House of Veronese, 1573, explores the illusion of vast, stretched out space that seems to reach out far beyond the figures in the front of the scene.

Similarly, Tintoretto’s Miracle of the Slave, 1548, tells the Biblical story of St Mark, who is shown in dramatically foreshortened perspective as he descends from the heavens to free the slave being shackled in the scene below.

Capturing the muscular form of the human body was important to artists of the High Renaissance, as we see in masterpieces like Michelangelo’s Sistine Chapel Ceiling and his David, 1504. But Mannerist art took this innate understanding of human anatomy and began playing with it, stretching and exaggerating human forms to create theatrical visual effects. While this might sound bizarre, the bodily distortions we see in Mannerist art were elegant and refined, playing with how flowing, serpentine poses could aid in telling a story. Parmigianino’s Self Portrait in a Convex Mirror, 1523-24, is an early example of Mannerist art, in which the artist plays with how a curved mirror can create curious bodily distortions.

His later painting Madonna with the Long Neck, 1534-1540, typifies the drama in the art of the Mannerist period. We see how elongating both the Madonna and Christ child’s bodies gives them an air of otherworldly sophistication.

Heightened, unreal, and acid bright colors are another defining feature of Mannerist art, and as the style progressed over the years, artists became increasingly inventive, creative and expressive with their own stylized color palettes. Some artists played with the textures and surfaces of lavish, indulgent textiles, painstakingly rendering the glossy sheen of metallic threads and passages of intricate embroidery. Other artists came up with an entirely unique color palette that looked like nothing else that had been seen before it, as seen in Jacopo da Pontormo’s glowing, pastel toned Visitation, 1528-29.

Mannerist art often featured highly charged, emotive subjects, which created an air of unease and uncertainty for the viewer. Giulio Romano’s murals in the Palazzo Te in Mantua typify the extreme nervous energy of Mannerist art, with billowing storm clouds, topping towers and bodies caught mid-action as they wrestle with one another. In many ways the turmoil of Mannerist art reflected the uncertainties of the time in which they were living, as the Reformation and the sack of Rome gradually tore society apart. The emotional, expressive nature of Mannerist art also reflected the artist’s changing status, as they moved away from a craftsperson role into the intellectual arena of writers and philosophers.

Paolo Veronese: The Treasurer Of Art And Colors

10 Things To Know About Tintoretto