HomeAnswersDonatello vs. Michelangelo’s David Sculptures: What Are the Differences?

Donatello vs. Michelangelo’s David Sculptures: What Are the Differences? 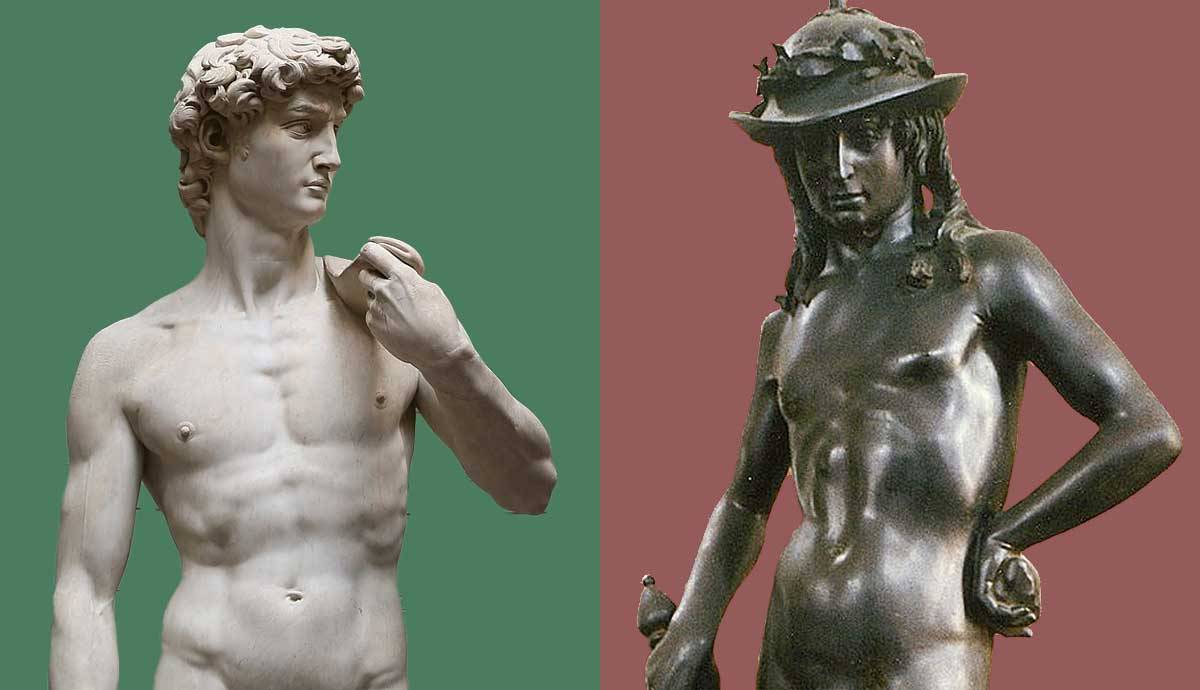 The Biblical character of David features prominently throughout much of art history. As a young shepherd boy who defeated the almighty giant Goliath with nothing but a slingshot, the character of David has captured the public’s imagination for centuries. A true underdog story, David symbolized the power hidden within the most unlikely and unexpected heroes. Of all the artists who tackled the story of David, the most renowned are two leading sculptors of the Italian Renaissance: Donatello and Michelangelo. Both artists made David sculptures in dramatically different ways, and both created one of the most important emblems of art history. We look at the key differences between these art historical icons.

Donatello made his famous David sculpture in 1440, some 60 years before Michelangelo, who created his own version in 1501-04. This means both artists were working during different political and cultural climates, which inevitably influenced the nature of their art. Donatello’s early Renaissance David was remarkable for the time because it was the first unsupported bronze cast of the Renaissance, and the first freestanding male nude that had been made since antiquity. It demonstrated the rising power of the Florentine Republic, which likened itself to the Roman Empire. Meanwhile, Michelangelo’s David is a high Renaissance masterpiece, demonstrating the true spirit of its time when greater awareness of science and human anatomy was taking hold.

2. The Two David Sculptures Were Drastically Different in Scale

At a glance, the most obvious difference between Donatello and Michelangelo’s David sculptures is scale. Donatello’s David stands at around 5’5, while Michelangelo’s hero is an incredible 17 feet high, making it more than twice the size of its predecessor. This means each sculpture has a dramatically different visual impact, highlighting the character traits of David in starkly different ways.

3. Donatello’s David Was Truer to the Original Character

Of the two David sculptures, Donatello’s smaller character was a truer depiction of the Biblical David. Donatello deliberately emphasized the boy’s slim, youthful and androgynous physique. This, along with the small stature of Donatello’s David draws us to the fact that this was a young boy, on the brink of adulthood, making him an unlikely and unexpected hero. He depicts David after defeating Goliath, holding a sword, with his foot resting on the head of the decapitated giant.

By contrast, Michelangelo shows David before he defeats the giant, holding a slingshot over one shoulder and waiting for the moment to strike. His David deviates far from the original youthful character of David, veering off into the realms of fantasy with an idealized male nude that is strong, muscular, masculine and unfathomably tall, a true hero for the time. Michelangelo therefore chooses to represent David’s strength of character, rather than a realistic portrayal. The awe-inspiring nature of Michelangelo’s David symbolized the strength and power of Florence during the high Renaissance, which was by now widely renowned as a center for cultural excellence.

Donatello and Michelangelo made their David sculptures in very different materials. While Donatello made his David in bronze, Michelangelo carved his David from an enormous block of marble. Both artists were undeniable masters in their craft – Donatello earned a reputation as one of Italy’s finest goldsmiths, while Michelangelo’s stone carving skills were unsurpassed by even his most competitive rivals. Even so, some might argue that Michelangelo’s David is the more technically impressive of the two, because of the hard graft involved in making such a lifelike portrayal of male beauty from a humble block of stone.

What is the Meaning Behind Michelangelo’s Creation of Adam?

What Are the Most Famous Renaissance Sculptures?