HomeAnswersWhat Are the Most Famous Renaissance Sculptures?

What Are the Most Famous Renaissance Sculptures? 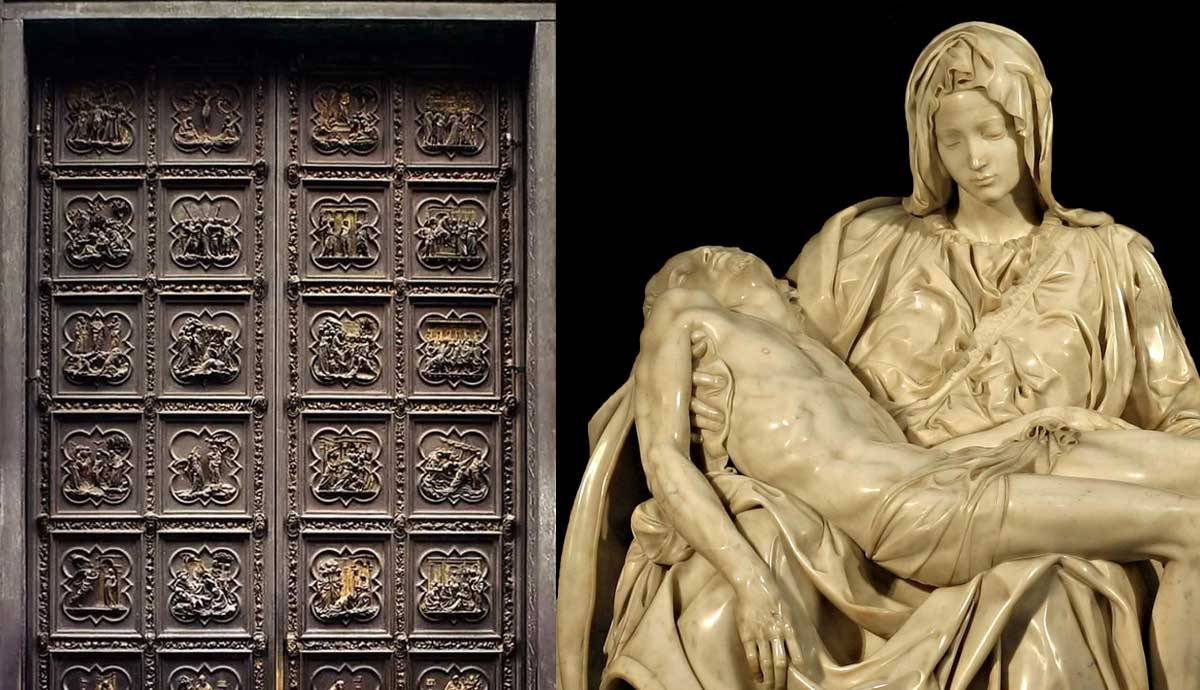 The incredible Renaissance era spanned the 15th to the 17th centuries. A real flourishing of the arts took place across Europe during this momentous period in history. Artists and designers made breakthroughs across all disciplines, most notably in painting, sculpture and architecture. Renaissance sculpture has remained particularly significant throughout art history since, because it celebrated and exalted the anatomy of the human form in a way that had never been seen in any art form before. These are the most breath-taking and awe-inspiring Renaissance sculptures, many of which are respected religious icons and world-famous tourist attractions today.

The stunningly ornate carved doors made by Italian sculptor Lorenzo Ghiberti for the doors of Florence’s Baptistery of San Giovanni are one of the earliest and most-celebrated Renaissance sculptures. A series of ten panels illustrate the stories of the Christian Old Testament with dazzling detail. The artist spent more than 20 years completing them. Once unveiled, a commenter observed, “nothing like them has been done before on the globe and through them the name of man shines everywhere.”

Italian sculptor Donatello made two sculptures of David from the Biblical tale of David and Goliath in his lifetime: one in 1408, and a later version in the 1430s. It was the second of the two, made as a commission for the Medici family, which cemented the sculptor’s place in history. One of the reasons for its significance was because the sculpture was the first freestanding bronze statue of the entire Renaissance. Subsequently it went on to inspire a great many artists to follow. Another reason for its importance was the artist’s level of realism when portraying David. He shows him as a normal young man, around 5’5 in height, with a slender physique, wearing nothing but boots and a hat, while leaning casually back on one leg.

While Donatello’s David made history for its realistic naturalism, Michelangelo went a stage further. He converted the humble character of David into an idealized, colossal hero, at 14 foot high. Such was the level of craftmanship that went into Michelangelo’s stunningly real marble sculpture, art historians now consider it to be one of the most famous and iconic sculptures of all time. Originally Michelangelo made David for the roof space of the Opera del Duomo Cathedral in Florence. But his patrons were so impressed they displayed the sculpture outside the Palazzo Vecchio, the town hall, at the Piazza Della Signorina for everyone to see. Here it became a proud symbol of freedom for the Florentine people. They even nicknamed it ‘the giant.’

Another masterwork from Michelangelo, made just a few years earlier, is his Pieta, 1498-1500. This emotionally resonant sculpture shows the dead adult Christ laid out on Mary’s lap. Cardinal Jean de Bilheres asked Michelangelo to make the sculpture for a side chapel at Old St Peter’s Basilica in Rome. The raw, emotional impact of the sculpture went on to launch Michelangelo’s mature career across Renaissance Italy.

Benvenuto Cellini’s late Renaissance sculpture Perseus with the Head of Medusa, 1545-1554, is one of the greatest masterpieces of the Renaissance era. Michelangelo once called Cellini “the greatest goldsmith of whom we have ever heard,” and this bronze masterpiece is surely a testament to his flawless sculptural skills. It illustrates Perseus, the great hero of Greek mythology, standing triumphantly with the head of Medusa in one hand, and her decapitated body sprawled out across the base. The combination of gruesome detail and theatrical heroism in this public artwork earned Cellini a widespread following throughout the Renaissance and beyond.