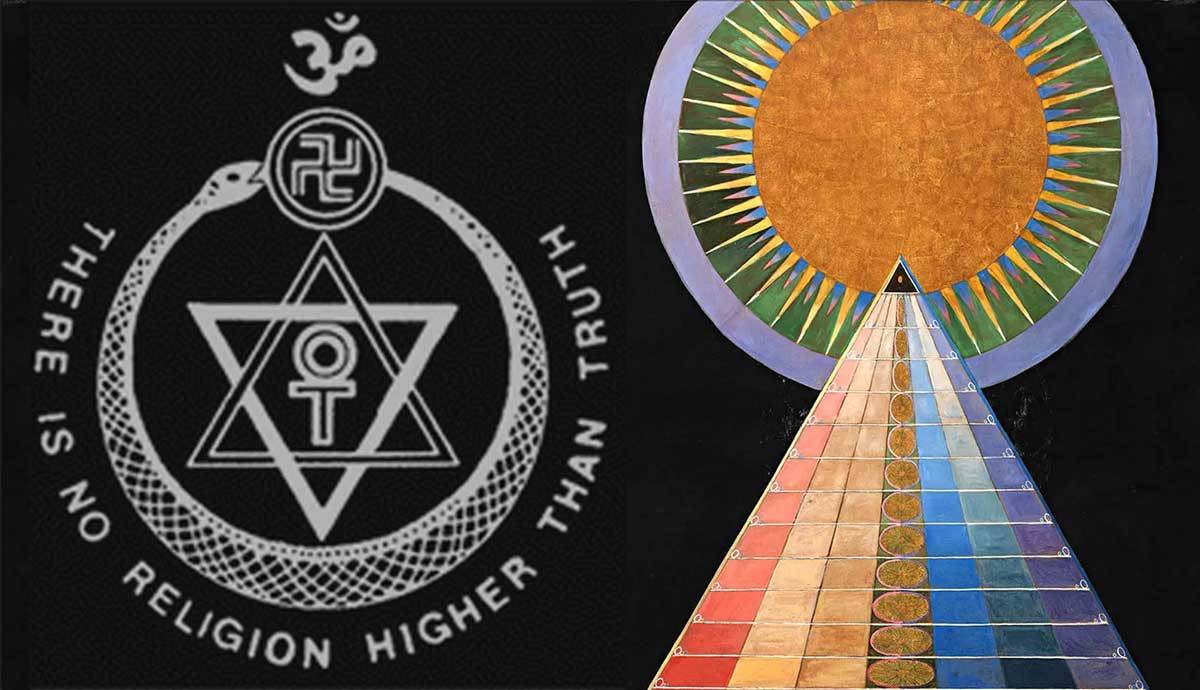 The late 19th and early 20th century philosophical school of Theosophy had a profound and long-lasting influence on modern, and particularly abstract, art. Theosophy was an eccentric and eclectic spiritual school. It merged elements of Eastern and Western religion with ancient Greek philosophy and occultist ideas.

One of the founding figures of Theosophy, Helena Petrovna Blavatsky, lived in New York. But her ideas spread far and wide across the United States and reached a particularly receptive audience in avant-garde Europe. From Hilma Af Klint to Jean Arp, Joseph Beuys, Marcel Duchamp, Wassily Kandinsky, and Piet Mondrian, artists of all kinds found new channels of expression by embracing Theosophy.

Theosophy had an enormous impact on the late 19th century school of Symbolism, informing both artists and writers. Many artists had grown weary of the industry and science that dominated the age. Therefore, the spiritual school of Theosophy offered a way out, allowing artists to tap into spiritual, occult, or supernatural ideas beyond rational reasoning. Some artists even claimed after initiation into the school of theosophy, they experienced spiritual manifestations, such as color auras or spiritual presences. Hilma Af Klint was one such artist. She regularly carried out Theosophist seances to communicate with spirits of the deceased and retrieve symbolism from them. Klint even argued her most celebrated series Paintings for the Temple were “…painted directly through me [by spirits] without any preliminary drawings…”

Theosophy Opened Up Pathways into Abstraction

Many artists who adopted Theosophical ideas in their art worked in abstract styles. The most notable of these were the two art world giants Wassily Kandinsky and Piet Mondrian. They were both attracted to the way Theosophy emphasized spirituality, the human soul and the importance of intangible, metaphysical experience. Both these artists, in very different ways, found through Theosophy a way to transcend reality, drawing us into abstract worlds. This, in turn, led the way for the Abstract Expressionism of Mark Rothko, and the Color Field art of Kenneth Noland and Anne Truitt.

Kandinsky’s monumentally successful art guide, Concerning the Spiritual in Art, 1912, was profoundly shaped by Theosophy. He argued throughout the book that only art could allow us to reach truths beyond the reach of scientific research. Moreover, it was the artist’s role to open up these channels of communication for others to experience. Kandinsky believed these spiritual ‘awakenings’ could be most accurately expressed through the spontaneous application of colors, shapes, lines and forms. It was this school of thought that led Kandinsky towards what he saw as the higher realms of abstraction.

Dutch painter Piet Mondrian adopted spiritual, Theosophist ideas in his own way, creating a style of art that was entirely different from Kandinsky’s. He became a member of the Dutch Theosophist society in 1909. It was through this membership that he developed his most extreme ideas around pure abstraction. More specifically, Mondrian wanted to represent a kind of cosmic harmony order and balance, which he believed could express the truth and beauty of nature in an abstract way.

Mondrian’s composed his late abstraction – a style he called Neoplasticism – from the most basic elements – black and white, with the primary colors of red, yellow and blue. The Theosophist mathematician MHJ Schoenmakers had a particularly profound impact on Mondrian’s distinctive language of abstraction. In his published essay The New Image of the World, 1916, Schoenmakers wrote, “The two fundamental and absolute extremes that shape our planet are: on the one hand the line of the horizontal force … and the other vertical… spatial movement of the rays that issue from the center of the sun… the three essential colors are yellow, blue and red.”