HomeAnswersWhat Are the Most Famous Pop Art Paintings of All Time? (4 Works)

What Are the Most Famous Pop Art Paintings of All Time? (4 Works) 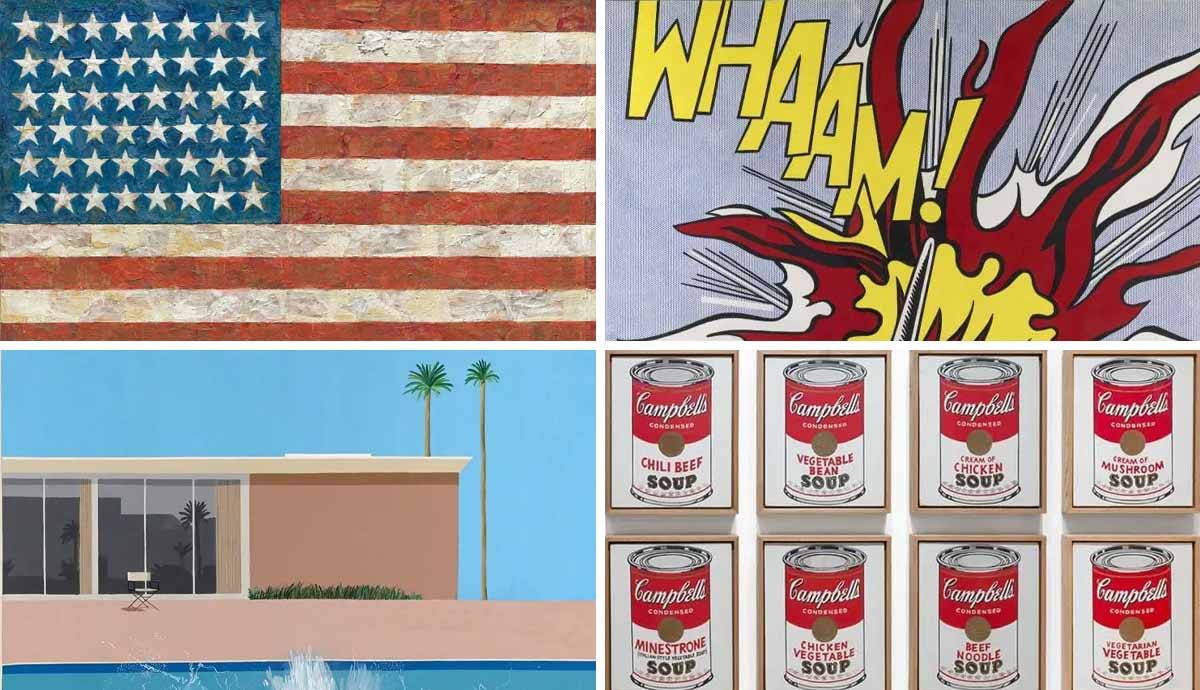 Pop Art was one of the most radical art movements of the 1950s and 1960s, with epicenters in the UK and the United States. Leaders of the style merged ordinary, popular culture references from daily life such as food, advertisements, celebrities and commercial objects with art, producing bold, punchy, and accessible style of art which everyone could relate to. Of all the timeless paintings produced during the prolific Pop Art era, which one is the most famous of all time? Or is there only one?! We look at the 4 most iconic Pop Art paintings that have emerged from this monumental period of art history, starting with the most popular.

Andy Warhol is the poster boy for American Pop Art, and his suite of paintings Campbell’s Soup Cans, made in 1962, must surely be his best-known work of art, and among the most famous Pop Art paintings of all time. Although they look like mass-produced, printed images, Warhol actually hand-painted each of the soup cans with synthetic polymer paint on canvas, and hand-stamped a fleur de lys ring pattern around the bottom of each one. When displayed as Warhol intended, in a gridded group, the soup cans might look like a row of identical cans lined up on a supermarket shelf. But each one is unique, advertising a different flavor of the famous American food staple.

Roy Lichtenstein’s two-part painting Whaam! Is one of Pop Art’s most ubiquitous motifs, succinctly defining the spirit of American Pop Art. Lichtenstein took his imagery from the realms of comic books and graphic novels, emulating individual comic book scenes and enlarging them up to wall size for dramatic effect to produce some of the most striking Pop Art paintings in history. In the right-hand panel, Lichtenstein has taken the onomatopoeic text of comic books and made it a defining feature of his artwork. On the left, a fighter jet seems to come crashing into the scene. Although his artwork has the clean precision of a print, he actually painstakingly painted it by hand. We also see Lichtenstein’s trademark ‘Ben-day’ dots in this artwork – the ink-saving spotted technique adopted by comic book printers.

British Pop artist David Hockney moved to Los Angeles in 1964, and he fell in love with the azure blue skies and iridescent light he encountered there. While living in the Los Angeles area, Hockney noticed that everyone seemed to own a swimming pool. He went on to paint a whole series of artworks featuring swimming pools, and other elements of the easy, breezy, everyday lifestyle of Californians. A Bigger Splash, 1967, typifies the artist’s style of the 1960s, with bold, simple shapes and bright, eye-catching colors.

In this artwork Hockney chose to paint the exact moment an unseen diver hits the water, causing a huge splash to plume into the air. Hockney was fascinated by the instantaneity of photography, and like many of his artworks, this painting was based on a found, photographic image. Yet Hockney also pointed out how it took him a long time to render the splashes of the water, a slow process that contradicts the ‘snapshot’ effect of the final image.

American painter Jasper Johns painted his simple, yet iconic Flag in 1955. This artwork was to be the first of many artworks the artist made featuring flag motifs, which Johns said were “painted flags and paintings of a flag.” Johns made up the stripes of this painting by using cut-up newspaper extracts which were then only lightly painted over, leaving traces of the text only just visible. By including these politicized fragments of text, Johns changed the patriotic flag motif into a complex image that is loaded with complex associations, both good and bad.

How Did Roy Lichtenstein Make His Pop Art?