What are Henry Moore’s 5 Best-Known Sculptures? 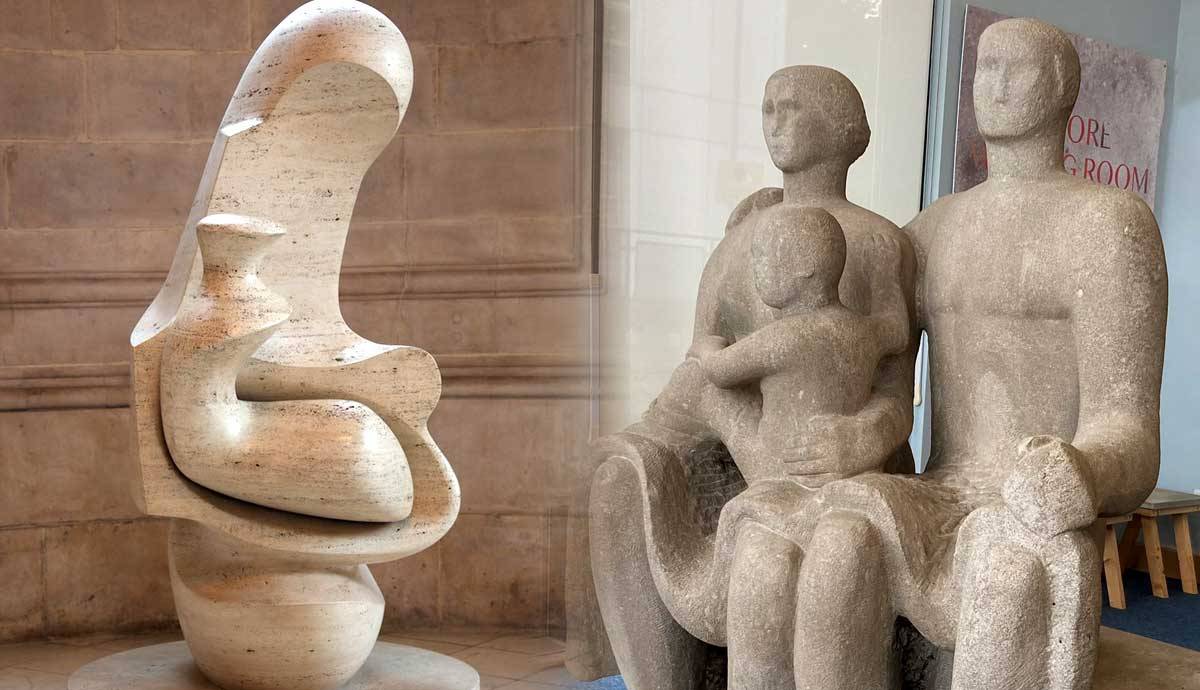 British artist Henry Moore was a leading sculptor of the post-war 20th century. His sinuous, curvaceous forms merged aspects of Surrealism, Constructivism and abstraction. Moore also made nods towards non-Western traditions, most notably African tribal masks and carvings. The term ‘human sculpture’ is often applied to his art, because it so often made reference to the fullness and sensuality of the human body, and has such a smooth, tactile quality. Moore was also a strong proponent for ‘direct carving’, working closely with materials to tease out their magical inner qualities. We take a glimpse through some of his finest sculptures to demonstrate the scope of his artistic practice.

Henry Moore made this large, plaster cast model for a bronze sculpture commissioned by the British Council for the Festival of Britain. The sculpture resembles a reclining female form leaning on one arm, a nod towards the art historical tradition for recumbent female nudes. However, Moore’s sculpture was radical in its day for its playful, surreal interplay between realism and abstraction. Moore also demonstrates his fascination with the relationship between solids and voids. Open space filters through the center of the sculpture, and skeletal, bone-like forms contrast with larger areas of weight and solidity.

Henry Moore made this sculpture of a family group as a public commission for the British New Town Harlow. Rather than a direct portrait, the sculpture is a universal symbol for family unity in post-war Britain. It therefore reflected widespread cultural aspirations for security and stability. The sculpture was particularly fitting for Harlow, which locals of the time called ‘pram town’ for its particularly high birth rate. While the work is less abstract than many of Moore’s artworks, it still echoes the same smooth surfaces and weighty solidity of all his art. Carved from Hadene stone, the artwork is a key example of Moore’s ‘direct carving’, in which he worked intuitively with materials towards the final outcome.

Henry Moore made a series of Helmet Heads sculptures from the 1930s to the 1980s. Each took its own distinctive shape and form. The series explores themes of vulnerability and protection, with a small, inner form protected by a larger casing or shell on the outside. Moore likened his helmets to his other ongoing series on the ‘mother and child’ theme, comparing the outer shell to the mother protecting her fragile child inside.

Moore also enjoyed the surreal mystery of helmets, and the way they partially obscure and abstract the forms inside. In this artwork Moore contrasts a golden, shiny ambiguous form with a thick outer shell in cast bronze, thus highlighting the different roles between these two elements. As with many of his sculptures Henry Moore plays with ‘piercing’ his helmets with holes, creating two window spaces that allow us to peer at the form inside.

The Arch is a large outdoor public art sculpture that Henry Moore made between 1963-69. The inspiration for this 6-metre tall, arching form came from a piece of bone. Using the bone as a starting point allowed Moore to connect his artwork with the inner structures of the human body. But Moore took the fragile bone form and translated it into a monumental, free-standing sculpture, resembling an arch or entranceway. Moore likened the final form of this sculpture to the triumphal arches of historical architecture. He also compared it to naturally occurring entranceways like caves or sea arches. Much like these man-made and naturally occurring structures, Henry Moore creates a spatial design in which visitors can enter into and inhabit.

The ‘mother and child’ theme was a recurring one in Moore’s practice. On the one hand, he referenced the art historical and Biblical tradition of the subject. But he was also deeply fascinated by the concept of inner and outer forms, and how to create a visual dialogue between them. Henry Moore made this smooth, richly tactile marble sculpture for St Paul’s Cathedral, London, in 1983. He presents the three stages of motherhood here, from conception, to gestation and parenting. They all reveal themselves in abstracted forms as you move slowly around the sculpture.

Barbara Hepworth: The Life and Work of the Modern Sculptor