HomeArtistsCarlo Crivelli: The Clever Artifice of the Early Renaissance Painter

Carlo Crivelli: The Clever Artifice of the Early Renaissance Painter

Fifteenth-century Italian painter Carlo Crivelli stands out for his dazzling combination of Medieval decoration and Renaissance naturalism. His religious paintings are full of illusionistic textures and clever visual tricks. 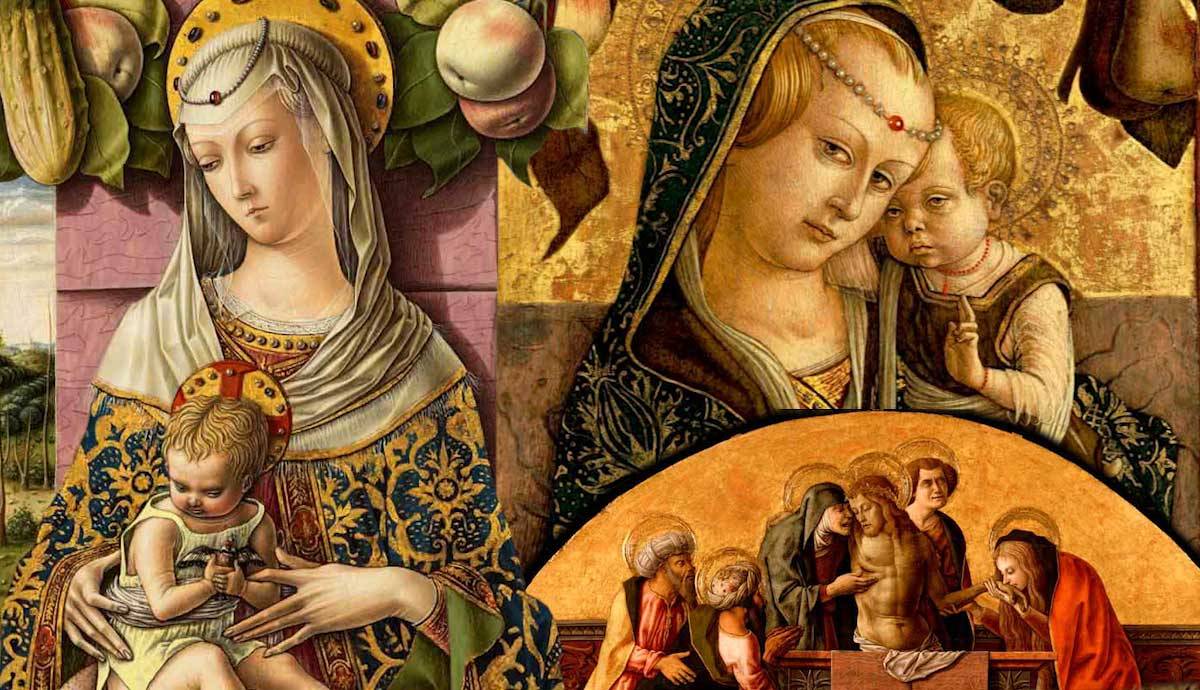 Carlo Crivelli (c. 1430/5-1495) was an Italian religious painter. He was born in Venice and started his artistic training there, where he was influenced by the famous workshop of Jacopo Bellini. After being exiled from Venice, he spent time in Padua (Italy) and Zara (Croatia) before settling in the Marche, an area of east-central Italy on the Adriatic coast. His mature career took place there, and he painted many altarpieces for churches in the Marche, in towns such as Massa Fermana and Ascoli Piceno. Most of his altarpieces have since been broken up and their panels have been scattered throughout many European and American museums. His brother Vittore also painted in a similar style, though Vittore’s works do not have the same visual impact as Carlo’s.

Exclusively a religious painter, Carlo Crivelli made his living creating altarpieces and panel paintings for private religious devotion. Accordingly, his most common subject was the Madonna and Child (Virgin Mary and baby Jesus) which often occupied the central panel of multi-panel altarpieces called polyptychs.

He also painted countless saints, especially individual standing saints, for the side panels of such polyptychs, and other religious scenes such as Lamentations and Annunciations. Working as he did in a period of transition between the dominance of tempera paint and the popularity of oil paint, he painted in both, sometimes on the same work. None of his subject matter is the least bit unusual. In fact, countless painters have portrayed the same subjects with similar iconographies before and after him. It was instead the manner in which he portrayed them — in a style that was equal parts old-fashioned Medieval decoration and then-current Renaissance trends — that makes Crivelli noteworthy.

Crivelli’s art belongs to a late-Medieval tradition of gold ground paintings. This refers to panel paintings, usually made with brightly-colored tempera paint on backgrounds covered in thin sheets of gold leaf. Gold ground was a popular choice for religious paintings, especially multi-panel altarpieces for church settings, a trend that was probably at least partially inspired by Byzantine religious icons. These altarpieces would have been set in intricately-carved, gilt wooden frames, which were often decorated with the same pointed arches, tracery, and pinnacles as those found on surrounding Gothic church buildings. These elaborate frames rarely survive today.

Gold ground paintings do not utilize linear perspective, which was not in use in their heyday. Instead, their gold backgrounds appear essentially flat, though often beautifully textured. Starting with early Renaissance masters like Giotto, these gold backgrounds were eventually replaced by increasingly naturalistic and perspectival landscape backgrounds. Gold ground painting did not go away overnight, but it did become less popular over time.

Naturalistic landscape backgrounds eventually became the norm for western figurative paintings. Crivelli used both gold ground and landscape backgrounds on different paintings and sometimes also painted a combination of landscape with golden sky. By Crivelli’s era, gold ground painting would have been considered a conservative, old-fashioned choice more suitable for provincial patrons than those in big cities. The use of it in the late-15th century gives many people the false impression that the artist himself was conservative and backward-looking, perhaps with no knowledge of contemporary Florentine painting innovations.

Art historians typically characterize Crivelli’s art as International Gothic, a style favored in European royal courts of the later Middle Ages. Whether in altarpieces or illuminated manuscripts, International Gothic is characterized by copious decoration, bright colors, and lots of gold. It is luxurious but not especially naturalistic.

One of the first things that most people notice about a Carlo Crivelli painting is all the beautiful textiles — the clothing religious figures wear, the rich hangings behind them, cushions, rugs and more. Some of the most spectacular appear on the gold-patterned dresses of the Virgin Mary, on the fantastical armor of Saint George, and on the richly brocaded ecclesiastical vestments of Saints Nicholas and Peter. The artist created these lavish textiles through a combination of paint and gilding, the latter of which he often built up into low relief through a technique called pastaglia. This technique appears on halos, crowns, swords, armor, jewels, and other costume props, blurring the lines between illusion and reality.

Oftentimes, Crivelli seems to have paid more attention to the textures of people’s clothing and backgrounds than he did on the figures themselves, which is why these patterns usually dominate the overall composition. His representations of saintly bishop’s vestments, for example, which frequently include wide trim decorated with tiny little religious figures — paintings of saints within paintings of saints.

This focus on decorative patterning is a very medieval attribute, and many consider it the opposite of Renaissance naturalism. However, Crivelli employed both pattern and naturalism side-by-side, often using the combination to play clever visual tricks on his audiences. People like to think that Crivelli’s paintings are intellectually simple, but nothing could be further from the truth. He was a master of illusionistic painting, as evidenced by features like the faux-marble parapets found in front of many Virgin and Child images he created. In person, they actually look like real slabs of marble at first glance. He used these skills to create decorative details with one foot in the world of the painting and one foot in the viewer’s reality.

Consider, for example, the trompe l’oeil garlands of fruits that hang above the Virgin and Child’s heads in so many of Crivelli’s paintings. They play on the ancient custom of decorating treasured religious paintings with garlands and other offerings on important occasions. Here, the garland is within the painting, not added on top of it, but Crivelli wanted us to be momentarily unsure. The scale and placement of objects like large illusionistic flies landing beside the Christ child’s foot make more sense when understood as external to the composition rather than as elements inside the world of the painting. Similarly, jeweled crowns and other offerings at the Virgin’s feet are rendered in low-relief pastaglia rather than being completely illusionistic painting, and this only adds to the visual cleverness.

At the other extreme, Crivelli was also known for adding real, three-dimensional elements to his art. For example, Saint Peter’s Papal keys — his identifying attribute — are not always flat paintings in Crivelli’s art; instead, the artist attached fully three-dimensional wooden keys to the painting on at least two occasions (the Camerino Triptych illustrated above is one example). Therefore, objects that look like they are external to the painting, such as the garlands of fruit and other offerings, may be complete painted illusions, while objects that seem integral to the painted composition may be partially or fully three-dimensional. Crivelli was certainly witty and clever.

He was also a skilled and sophisticated artist, though his copious use of gold and emphasis on decorative patterns often distract us from that fact. Paintings like his c. 1480 Virgin and Child at New York’s Metropolitan Museum of Art or The Annunciation with St. Emidius at London’s National Gallery (his most famous work) prove his ability to paint naturalistic human forms, volume, and perspective with the best of them. Even when his figures are not fully volumetric, they are never awkward or inelegant. His complex visual games and illusionistic trickery are clearly not the work of a naive artist as much as one who chose to follow different conventions at different times.

Paradoxically, Crivelli’s unique style sabotaged his later reputation and place in art history. Simply put, he does not fit well into the traditional narrative of increasing naturalism in the Italian Renaissance. His style would have fit much better into an earlier tradition than one roughly contemporary to Leonardo da Vinci. Accordingly, earlier generations of art historians usually chose to ignore him, considering him a backward-looking anomaly who was unimportant to the overall development of Renaissance art. Additionally, his location in the Marches rather than a big artistic center like Florence or Venice relegated him, in their eyes, to provincial status. This is not to say, however, that important collectors like Isabella Stewart Gardner did not purchase and enjoy his work. They certainly did, and they eventually donated his works to major museums, particularly in America.

Fortunately, times have changed, and scholars have begun to recognize that art history is not always as linear as once thought. Finally, there is space for Crivelli. Although his art still doesn’t fit into the traditional narrative, its visual impact is no longer being ignored. Museums are increasingly displaying their Crivelli paintings, and new books, exhibitions, and research are helping us to become better acquainted with this most fascinating early Renaissance painter.

The Ghent Altarpiece: Details Of A Masterpiece