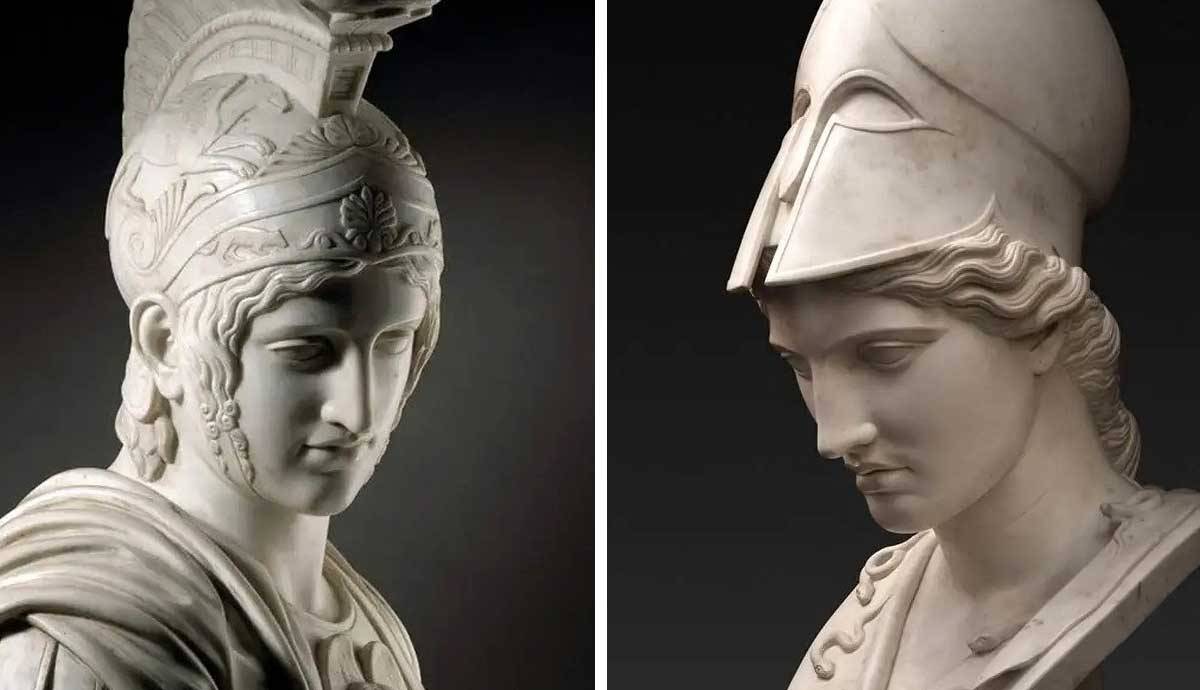 In the first century BCE, the Roman poet Horace famously wrote that “captive Greece captured, in turn, her uncivilized conquerors, and brought the arts to rustic Latium”. Still, it wasn’t just art that had flown into Rome from the conquered Greek world. It was not only statues, painted pottery, painting, music, and literature. It was also religion that had made its way to Rome. Greek gods and mythology had transformed the religious scene, but this was not an event that had occurred overnight. Greek influence was present way before the battle of Actium in 32 BCE, when Ptolemaic Egypt, the last bastion of the Greek world had fallen to Roman hands.

Besides, the Etruscans, who had preceded the Romans but were eventually assimilated into the Roman way of life, had adopted multiple Greek gods into their pantheon and were quite fond of Greek art, as evidenced by the Greek painted pottery that archaeologists still unearth in their sites. The Romans adapted the mythology and iconography of multiple Greek gods into their religion and created a new mythology that had its roots in Greek myth. Let’s not forget that the Romans claimed that their distant ancestor was the Trojan hero Aeneas: a son of Venus – the Roman equivalent of Goddess Aphrodite – who was mentioned in Homer’s Iliad. Still, it is important to see the Romans as active interpreters of the Greek culture and not as mere passive receivers.

Many Roman Gods Adapted the Mythology & Iconography of Their Greek Counterparts

The Greeks believed in multiple deities, the most important of whom were the Olympian Gods. Even though we can trace the roots of some of these gods back to the Bronze Age, we generally accept that the Greek gods took their known form in Homer’s epics (late 8th/early 7th century BCE); the Iliad and the Odyssey. Homer’s gods were fashioned after humans. Some would even say that they were too human, like the Greek philosopher Xenophanes (c. 570—c. 478 BCE), who blamed Homer for creating gods with human flaws and characteristics.

The Romans had already adopted the Greek pantheon and mythology long before the conquest of Greece. However, as it always happens with ideas traveling through different cultures across time and space, the ideas were transformed. The Romans sought to find common ground between their gods and those of the Greeks. By adapting Greek mythology, iconography, and art to cater to their own needs, they ended up with multiple gods that were Roman in name, but Greek in the origin of their myth. For example, the iconography and mythology of Zeus – the Greek god of the sky and king of the gods – were absorbed by Jupiter, his Roman equivalent, with few differences.

Still, the Romans did not simply take ideas from the Greeks. The original ideas were filtered through Roman eyes and eventually through the writings of famous Roman poets like Virgil (70—19 BCE) and Ovid (43 BCE—18/19 CE), who expanded and reinterpreted Greek mythology.

Additionally, the Romans were… not the Greeks. Their way of life, and their political and ideological system differed from what one would encounter in a Greek polis like Athens or even a Hellenistic kingdom like Macedon. It is only natural then that they needed gods who would reflect their own needs and views.

A good example is that of the god of war. In the Greek world, Ares was not particularly popular as he represented the violent and destructive aspects of war. Strategic warfare was reserved for another goddess, the patron deity of Athens, Athena, who was held in particularly high regard. Still, Ares would become extremely popular in Rome under the name of Mars. Second only to Jupiter, Mars would absorb all of these attributes related to war, including Athena’s strategic traits, quite possibly to better reflect the idiosyncratic patriarchal ideology of the Romans.

Why Did Greek and Roman Gods Have Different Names?

Where the Greeks spoke of Zeus and Hera, the king and queen of the gods sitting on their thrones on top of Mount Olympus, the Romans spoke of Jupiter and Juno.

Why different names? Initially, the Romans had their own gods with their own set of attributes. By adapting the mythology and iconography of the Greek Gods for their own purposes under the names of their own preexisting deities, the Romans were able to create a unique Roman pantheon which of course, carried the weight of the Greek tradition. One good example of this is the Roman God Neptune. It is thought that in the beginning, Neptune was a god of freshwater. However, due to his relation to water, he ended up absorbing the mythology and iconography of the Greek God Poseidon, god of the sea. In the end, Neptune became the god of both freshwater and sea, and his identity was inseparable from that of his Greek equivalent.

Of course, the Romans also adopted gods that had no equivalents in their own culture, like Apollo, who was later often equated with Sol, and Dionysus, known in Rome as Bacchus. The opposite was also true. There were distinctly Roman deities with no equivalent in the Greek religion. The most important was Janus, the Roman god of transitions, time, gates, and passages and the embodiment of the river Tiber, Tiberinus.

The ability of the Romans to worship new gods did not stop or even begin with the Greeks. The Roman religion kept evolving with the expansion of Rome and new gods were constantly introduced until the coming of monotheism. Below is a list with some of the most important gods and their names in Greece and Rome.

Ancient Greek deity Zeus was god of the sky and thunder, and king to all the gods, residing in Mount Olympus. Romans later adapted their own version of Zeus, called Jupiter. Both Zeus and Jupiter were mature male gods who lived in the sky.

Eros was the all-powerful, ancient Greek god of carnal love, matched only by his Roman rival Cupid, the god of lustful desire. Both Eros and Cupid were equally mischievous, winged young men who could fire arrows of love or hate straight into the hearts of unsuspecting targets, causing all sorts of mayhem. In Roman myth cupid is almost inseparable from Aphrodite, the goddess of love.

Ancient Greek god of the sea Poseidon was transformed by the Romans into Neptune, the god of both freshwater and the sea. In artworks, both look remarkably similar, with long flowing beards, a muscular frame and a forked spear in one hand.

Aphrodite, famously the strikingly beautiful Greek goddess of sexual love and beauty, presided over marriage. Her Roman counterpart Venus is similar and also has associations with vegetation and fertility.

In ancient Greek mythology Hera was the goddess of marriage, women and family, and she married her brother Zeus, making her Queen of the gods, although theirs was not to be a happy union. In Roman mythology, Hera’s closest equivalent is Juno, who married Zeus’s counterpart Jupiter, and they remained together despite Jupiter’s multiple affairs.

Greek god Ares and Roman god Mars were both gods of war. For Greeks, Ares was the tempestuous and unpredictable spirit of battle, and he wasn’t particularly popular or venerated. Meanwhile Mars was a proud and valiant protector, second only to Jupiter in his importance within the Roman pantheon.

Demeter was the ancient Greek goddess of the harvest and grains, and Greeks believed she was responsible for keeping their crops alive. With her daughter, Persephone or Kore, they were associated with the Underworld and the rites of the dead. While Roman Ceres was also a goddess of grains, Romans also associated her with art and culture.

Ancient Greek god Hephaestus and Roman god Vulcan were both gods of fire and blacksmithing. Both created women out of gold to assist in their many endeavors. Hephaestus and Vulcan made weapons and tools.

Ancient Greek god Hermes was the messenger to the gods, and an important mediator between the realms of the living and the dead. His Roman equivalent was named Mercury, also a quick-footed messenger, named after the fastest traveling planet. Both wore winged sandals, winged helmet and carried a caduceus.

Greek god Dionysus/Bacchus was mainly known in Rome as Bacchus or Liber as god of wine and grape harvest. However, while Dionysus was seen as a respectful, jovial young man, Bacchus was a debauched partier, whom Romans often depicted as a drunken man. The Roman cult of Bacchus sometimes portrayed him as a vengeful man who punished those who dared to oppose his indulgent ways.

Last but not least, Apollo, the youthful and idealized god of the sun, was the only deity to keep the same name in both the Greek and Roman pantheons. Both Greeks and Romans referred to Apollo as Phoebus, meaning pure and bright.

Pan was the Greek god of the shepherds, the forests, and the wilderness. In Rome, he was often equated with Faunus, with similar attributes. The Romans also associated Inuus with Pan. However, Inuus’ realm was mostly that of sexual intercourse and more often with the fertility of animals. Pan, Faunus, and Ituus were loosely associated with each other and sometimes could be seen as different deities.

Artemis, the sister of Apollo, was the goddess of the hunt, chastity, wilderness, childbirth, and vegetation. She was often associated with the moon. In Rome, Artemis was equated with Diana. However, Diana was also a goddess of the crossroads. Just like Artemis, Diana was the twin sister of Apollo, and the daughter of Zeus and Leto or Jupiter and Latona, as they were known in Rome.