HomeAnswersWhy Did Damien Hirst Put a Shark in a Tank?

Why Did Damien Hirst Put a Shark in a Tank? 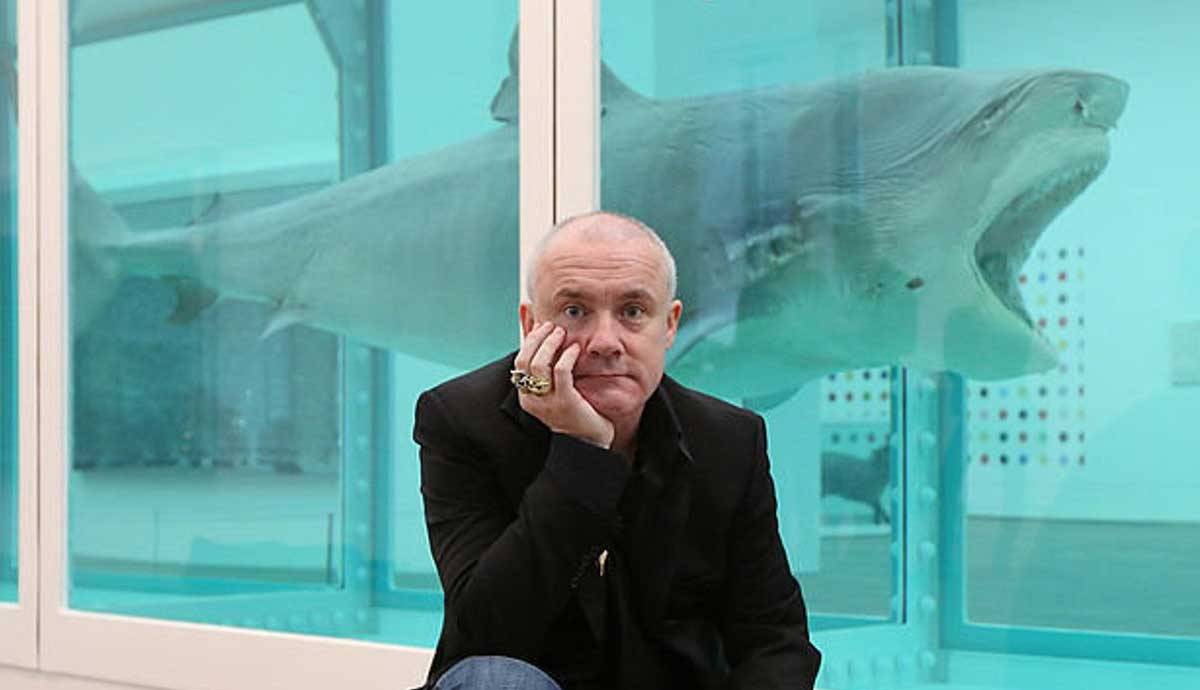 Famed British artist Damien Hirst made his name in the 1990s as a troublemaker and provocateur, and leading member of the Young British Artists (YBAs). Like his contemporaries Tracey Emin and Sarah Lucas, Hirst enjoyed causing shock and sensation with his art. One of the key themes that has remained constant throughout his art, since this time and beyond, has been the porous boundary between life and death.

In an early series he explored this theme by displaying dead animals preserved in tanks of formaldehyde, as if suspended in a state between alive and dead. Of all the animals Hirst worked with, by far the most controversial was his tiger shark in a tank, The Physical Impossibility of Death in the Mind of Someone Living, 1991. Such was the furor caused by this artwork, it still features prominently in articles and discussions today. But why a shark, and why a glass vitrine? Let’s delve into the work to find out more.

Damien Hirst Saw the Shark as a Symbol of Sublime Fear

In the early 1990s, the art magnate Charles Saatchi offered Damien Hirst an unlimited fund to create any artwork he wanted. Hirst rose to the challenge, bringing out the big guns and taking on a big budget project that he knew would pack a punch. For Hirst the shark symbolizes terror and fear, evoking the same kind of sublime, visceral response that landscape painters like Thomas Cole, J.M.W Turner and Frederic Edwin Church once triggered in the viewing public.

Controversially, Hirst hired an Australian shark hunter to catch the big fish, asking him to capture “something big enough to eat you.” Hirst also plays on the fear response, deliberately displaying the shark with its mouth wide open, and sharp teeth visible. Preserving it in formaldehyde allows the shark to stay remarkably well preserved as if actually still alive.

Preserving the Shark Removes its Fear

While there is a predatory quality to Hirst’s shark, we are also aware that it poses no real threat. Instead, it hangs suspended and unmoving before us like a museum specimen in preserving fluid, for us to stare at with morbid fascination. Many of us may have never seen a shark as close up as this before, and by displaying it in this innocuous, sleep-like state, we can encounter what would normally be a fearsome creature in an entirely new, inert, and medical way.

Damien Hirst Made the Vitrine Resemble a Fish Tank

Hirst undoubtedly selected the glass vitrine filled with preserving fluid for its resemblance to a fish tank, or the glass screens of an aquarium. Seen hanging in the fluid, Hirst’s shark at first glance appears to be swimming through the blue-tinged fluid, as if caught in its natural habitat. This gives the shark a strangely serene quality, in the same way that watching fish flitting through water at the dentist’s office can make patients feel less stressed.

A Reflection on the Brevity of Life

The larger theme in Damien Hirst’s shark is encapsulated in the artwork’s title: The Physical Impossibility of Death in the Mind of Someone Living, 1991. He suggests we struggle to process the concept of death to such a degree that we continue to imagine his shark is actually still alive.

But Hirst wants to draw us closer to the fact that the shark is dead, and to remind us that death is an inevitable part of life that we ultimately need to come to terms with. In this way Hirst builds on the art historical tradition of memento mori (remember you will die) and vanitas painting, in which skulls, bones, wilting flowers, drying fruit and burning candles all pointed to the brevity of life. This concept has been a continuous theme running throughout Hirst’s art, encouraging us to face the ultimate fear that overhangs our human existence.

Who Is the British Artist Sarah Lucas?