HomeArtHow Did the Byzantines Influence the Italian Renaissance?

How Did the Byzantines Influence the Italian Renaissance?

Byzantine influences on the Italian Renaissance are rarely mentioned, but it is hard to imagine that a Greek empire hadn’t influenced a culture based on the revival of ancient Greece. 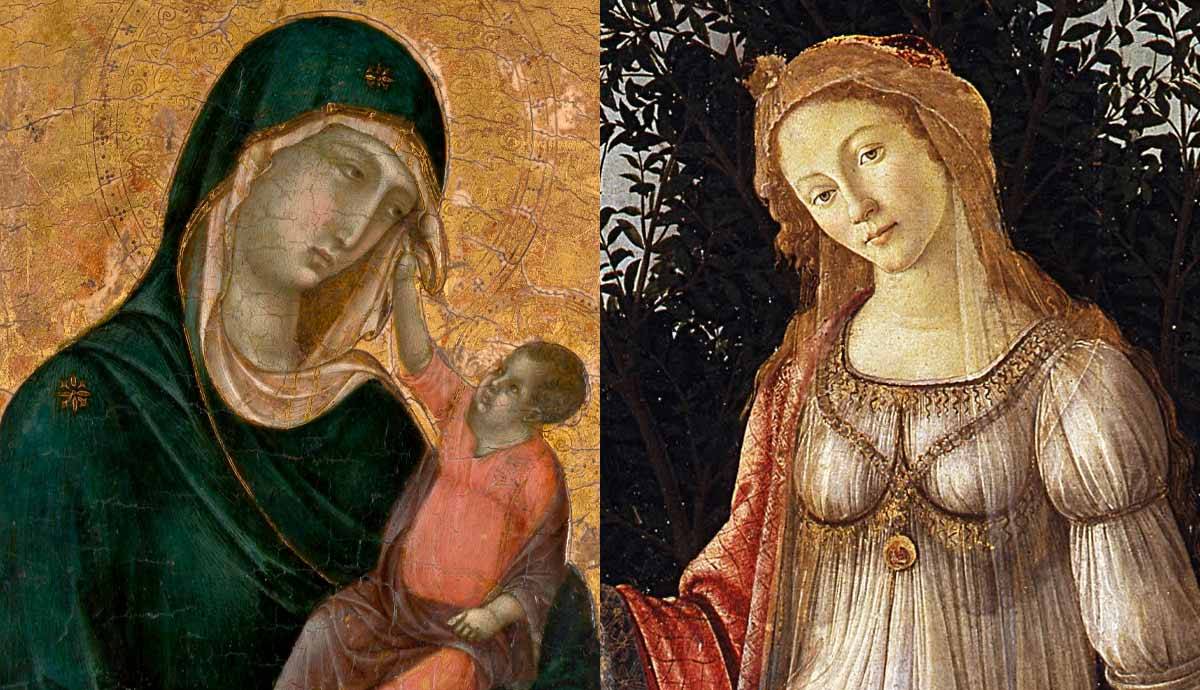 The tense relationship between Constantinople and Rome always left space for cultural interaction. From its very foundation, the idea of Constantinople as the capital of the Roman Empire was built on the traditions of Imperial Rome, even being called the “New Rome.” During the subsequent centuries, the Patriarchate of Constantinople and Papacy of Rome competed for theological supremacy to the point of mutually casting anathemas on each other. After the 29th of May 1453, the political significance of Constantinople became non-existent, but the exchange continued in other ways. The dynamic character of these interactions demonstrates that East and West weren’t two separate worlds, as is sometimes suggested. Above all, it reveals the enduring Byzantine influence on the Late Medieval and Early Modern culture.

Where Did the Byzantine Influences Come From?

Italian Renaissance was a period that marked the transition of European history from the Middle Ages to the Early Modern era. The starting point of the Renaissance, or Rinascimento in Italian, was the city of Florence, from where it spread throughout Western Europe. Scholars debate on the exact chronology of the Renaissance, with some arguing that it began as early as the 13th century. Since the term Renaissance is translated as “rebirth,” it represented the growing interest in ancient Greek culture, language, literature, and art. The culture of Ancient Greece was considered forgotten during the “dark” Middle Ages.

While the idea of repressed ancient Greek culture might be partially true for Western Europe, the Eastern Roman Empire was Greek throughout Middle Ages. Not only did Byzantium hold the territories of Ancient Greece, but its citizens spoke the Greek language, and its intellectuals continuously researched writings of late Antiquity. In the case of the Italian Renaissance, especially important was an already thriving “renaissance” that was happening in Constantinople, under the Palaeologus dynasty.

The Renaissance of the Palaeologus Period

Despite a steady decline of the Byzantine Empire during its last centuries, Constantinople managed to achieve a certain cultural rebirth, focused on a new relationship with Ancient Greece. In the 13th century, the word “Hellene” (meaning “a Greek”) simply meant “pagan” and was used in a derogatory manner, but now individuals were proudly identifying themselves as a part of the Hellenic (Greek) history.

Besides a large literary production, the Palaeologus period was marked by intense efforts in searching for ancient writings. Classicists of the 21st century owe much to their Byzantine predecessors: Demetrius Triclinius, Emanuel Moskopulo, Thomas Magistros, and Maximus Planudes. They made new editions of Hesiod and Pindar’s works and made comments on Sophocles and Theocritus. The interest of Byzantine intellectuals spread to natural sciences, mathematics, medicine, and astronomy. Planudes even rediscovered Ptolemy’s Geography. Theodore Metochites, one of the most educated people of the period, based his own Introduction to Astronomy on Ptolemy’s Almagest. Nikephoros Gregoras, another Byzantine intellectual, followed in his footsteps and wrote comments on Ptolemy’s writings and even suggested a revision of the calendar.

Greeks Migrating to the West

By the middle of the 14th century, the patronage of intellectual work in Byzantium began running dry. Fortunately for the Greek intellectual elite, their expertise in ancient texts and manuscripts was sought out in Italy. Emigration was a difficult decision to make for the Byzantines since it meant converting to the Roman Catholic faith, but many of them were willing to leave the already declining Empire.

During the 14th century, Greeks mostly spent a couple of years in Italy and then returned home. Only after the turn of the century did they started actively migrating from the Greek lands. Many of them had found their fortune on the Italian Peninsula and held important positions in politics, ecclesiastics, and education. They tutored in the cities of Padua, Rome, Milano, Pavia, and most importantly, Florence. They brought Byzantine didactic practice and philology, translated the works of Aristotle as well as Plato’s Republic from Greek to Latin, and tutored some of the most influential humanist thinkers. Leonardo Bruni, Guarino of Verona, Marsilio Ficino, Poggio Bracciolini, Francesco Filelfo, and Johann Reuchlin were educated by Byzantine intellectuals.

A clear example of Byzantine influence in Italy can be seen in the individual example of Manuel Chrysoloras, a Byzantine diplomat and a personal friend to Emperor Manuel II Palaeologus. Coming from an aristocratic family in Constantinople, Manuel was hired as a professor in Florence in 1397. More than his contribution to linguistics, during his period he tutored the early Italian humanists. His influence lies in the enthusiasm for the Greek language he instilled in his pupils. He wrote a textbook on Greek grammar, Erotemata, which had a wider influence and was the first Greek grammar ever to be printed. Leonardo Bruni, one of Manuel’s students, claimed that his teacher restored the knowledge of classical Greek in Italy. Though that may not be entirely true, it shows in what high esteem Manuel was held by his students.

Another intellectual who migrated to Italy from Byzantium was John Argyropoulos. He was a noble born in Constantinople in 1415 and was one of the most important translators of the 15th century. Johns’ arrival at a teaching position in Florence is recognized as the turning point in humanism since his works started emphasizing metaphysical thinking and critiqued early humanists for their lack of knowledge in philosophy. Argyropoulos’s biggest contribution was translating the works of Aristotle into Latin and writing commentaries on his works.

A curious case of Georgios Gemistos, who called himself Plethon, shows perhaps the most important part of Byzantine influence on the Italian Renaissance. Plethon was a Constantinople-born scholar, astronomer, and attendee of the Council of Florence, probably best known for his revert to Neopaganism. Inspired by Plato’s Laws, Plethon wrote his own Code of Laws in which he sets up a social and political utopia modeled on classic Athenian culture, integrating elements of Platonism, Stoicism, Islamic fatalism, and Zoroastrianism.

As a lay theologian in Florence, Plethon presented to the Florentine humanists a treatise “On the Difference Between Aristotle and Plato,” which inspired Cosimo de Medici to found the Platonic Academy of Florence. The Platonic Academy was led by Marsilio Ficino, one of the most important Renaissance Platonists. At that time in Western Europe, the works of Plato could rarely be found. Leonardo Bruni’s translations of the Phaedo, Apology, Crito, and Phaedrus were made only shortly before Gemistos’s visit. Most of his writing is recognized by a devotion to Greece and a desire to restore its ancient glory. Plethon also introduced the Geography of Strabo to Western Europe, which replaced Ptolemy’s geographical theories. As a consequence, he changed the conception of the configuration of the Earth and indirectly influenced Christopher Columbus.

Aristotle & Plato in the Italian Renaissance

The works by these Byzantine scholars made a foundation for the further development of Renaissance thought by Italian intellectuals. In Raphael’s fresco School of Athens, surrounded by many other intellectuals, ancient Greek philosophers Plato and Aristotle take the center of the composition. Placing these two figures in the center of the painting, Raphael clearly shows their significance for Renaissance culture in general.

No ancient revival had more impact on Renaissance philosophy than the recovery of Platonism. The most important Renaissance Platonist was Marsilio Ficino, who translated Plato’s works into Latin and wrote commentaries on several of them. He also translated and commented on Plotinus’s Enneads and translated treatises and commentaries by Porphyry, Iamblichus, Proclus, Synesius, and other Neoplatonists. He considered Plato as part of a long tradition of ancient theology that was inaugurated by Hermes and Zoroaster, culminated with Plato, and continued with Plotinus and the other Neoplatonists.

Unlike Plato, Aristotle wasn’t rediscovered. The Italians were familiar with his work but hadn’t studied it as much. Of special interest to the Renaissance became his text on Poetics, which defined art for centuries to come.

Artistic exchange can be seen as far back as the construction of the Basilica of San Marco in Venice. With its architecture alluding to the Church of Holy Apostles in Constantinople and golden mosaics, it is comparable to the highest accomplishments of 12th-century Byzantine art.

In Assisi too, artists began to make use of Byzantine models. In the mother church of the Franciscan order in Assisi, Giunta Pisano introduced Byzantine iconography to Italian religious art through Christus patiens. It is an iconographic variation of the Crucifixion where the dead Christ is shown with his eyes closed and his body swayed to the left.

Adaptation of the Byzantine model reached its peak in Siena with the work of Duccio di Buoninsegna. Maesta made for the Duomo in Siena in 1311 is one of the most innovative paintings of the early 14th century. It not only shows Duccio’s Byzantine influence but also his understanding of pictorial space and human form, which became a crucial characteristic of Renaissance art.

Another aspect of Italian Renaissance culture that came under perhaps secondary Byzantine influence was architecture. One of the earliest Renaissance architects, Filippo Brunelleschi shows clear elements of Byzantine architecture in his work. After establishing himself with the work on the Florentine Cathedral Santa Maria del Fiore and Ospedale degli Innocenti (Hospital for the Innocents), Brunelleschi was commissioned by Giovanni di Bicci de’ Medici to build a sacristy for the church of San Lorenzo.

Between 1421 and 1428, the so-called Old Sacristy was built as a cube surmounted by a hemispherical dome on pendentives, an element he adapted from the Byzantine practice of bridging the corners of the square to provide a circular base for the dome. Ringed by windows at its base, the dome was partitioned by ribs into twelve segmentally curved webs. A smaller cube, similarly vaulted, formed the alter chapel. The Old Sacristy was intended to be the Medici family mausoleum. Since antiquity, but also in early Christian and Byzantine periods, centrally-planned buildings were used as burial structures.

The nature of Byzantine influence is complex and cannot be understood without taking into consideration the wider political and cultural context of the late Middle Ages. It is clear that Byzantine intellectuals played a part in laying a foundation for the development of Renaissance thought. Through commercial, military, and political endeavors, these influences rooted themselves in the works of Italian artists already in the 13th century. Artists like Cimabue, Duccio, and Giotto continued and built upon this tradition, gradually leading the way to the High Renaissance.