HomeAnswersWhat’s the Difference Between Dadaism and Surrealism?

What’s the Difference Between Dadaism and Surrealism? 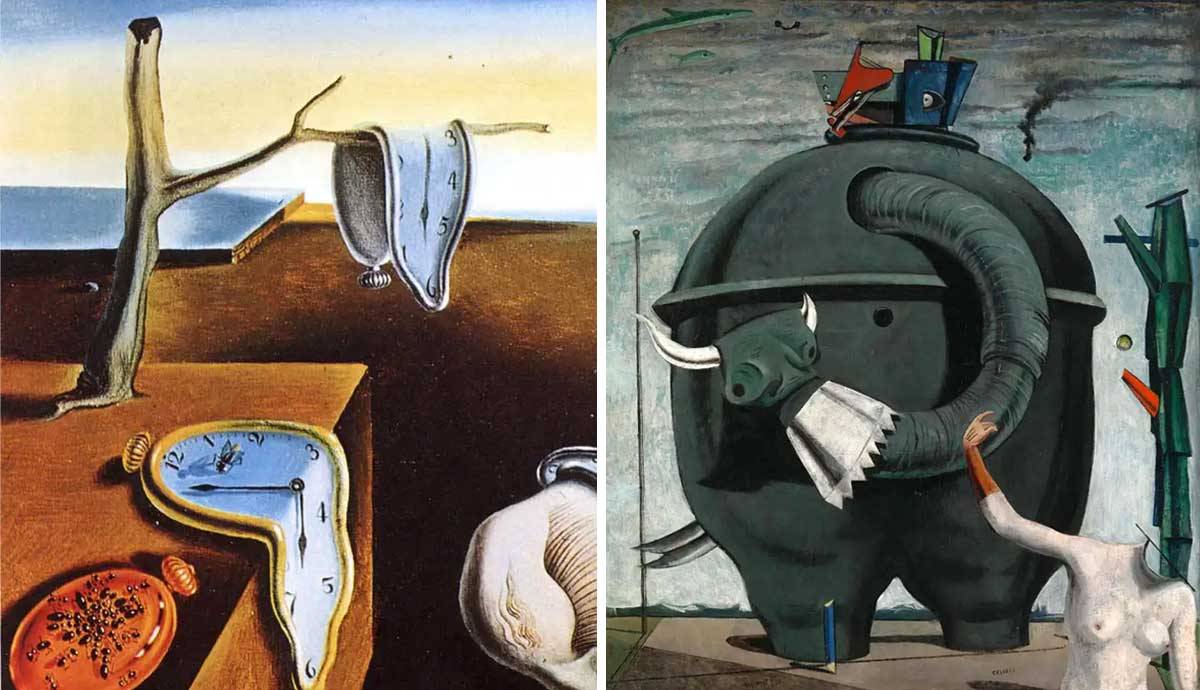 Dadaism (or Dada) and Surrealism were both monumentally important art movements from the early 20th century. Each expanded across all areas of the arts and had a phenomenal influence on the development of art, culture and literature well into the 20th and 21st century. And both avant-garde art movements paved the way for modernism. Meanwhile, some of the world’s most important artists made contributions to both movements. But despite these similarities, there were also some fundamental differences between Dadaism and Surrealism that clearly set them apart from one another. We examine the 4 key differences to look out for when identifying the two branches of art history.

One key difference between Dadaism and Surrealism: Dada came first, but only just. Dada was founded by the writer Hugo Ball in Zurich 1916. Although it began as a literary and performance-based phenomenon, its ideas gradually spread across many artforms including collage, assemblage, architecture and sculpture. While Dada began in Zurich, its ideas eventually took hold across much of early 20th century Europe. Meanwhile, Surrealism came a little later, officially founded in 1924, also by a writer, the poet Andre Breton, in Paris. Like Dada, Surrealism quickly spread and became the next great art trend across huge swathes of Europe. Some Dada artists even converted to Surrealism, such as Francis Picabia, Man Ray and Max Ernst, in response to the changing face of world politics around them.

In order to really understand how different Surrealism and Dadaism were, it’s important to look at the political climate from which each one emerged. Dadaism was undoubtedly an angry and anarchic response to the outbreak of World War I. In line with Nihilist philosophy, its artists asked fundamental questions about systems of control and figures of authority. Why should we put our trust in systems that are leading us blindly into the horrors of war? Their response was to pick apart supposedly normal power structures, instead opening up room for the ludicrous, ridiculous and absurd.

Some artists wrote nonsensical poetry, while others tore up pages in front of an audience, or made art from crude found objects, like urinals and old bus tickets. Collage and assemblage were particularly popular art forms during the rise of Dadaism, inviting artists to rip apart old, entrenched patterns and reconfigure them in confusing new ways, echoing the tumultuousness of modern society.

By contrast, Surrealism came from quite a different political landscape. The war was over, and in Europe there was a rising trend for inward-looking, healing practices of self-examination and psychoanalysis, through the work of important figures like Sigmund Freud and Carl Jung. So, rather than brutally responding to the outside world, the Surrealists mined their inner worlds, looking for a deeper understanding of the human psyche through a series of thought-based experiments. Some, like Salvador Dali and Rene Magritte, analyzed their dreams for imagery to depict, while others, like Joan Miro and Jean Cocteau played with ‘automatic’ drawing and writing – working without pre-thought and allowing their subconscious mind to take over.

4. Both Movements Looked at Disjointed Imagery in Different Ways

One similar characteristic shared between Dadaism and Surrealism is the use of broken apart, or disjointed imagery, through practices such as collage and assemblage. But there is a fundamental difference. Dada artists were pulling apart familiar things and leaving them in a scattered state – as seen in Kurt Schwitters and Hannah Hoch’s collages – in order to point out their inherent absurdity and meaninglessness. By contrast, the Surrealists cut up and reconfigured everyday objects like book pages, old dolls, or found objects, transforming them into a weird and uncanny new reality. They did this to highlight the hidden psychological meaning behind everyday items, lurking just beneath their surface.